At the beginning of autumn, usually around the first weekend in October, houses and streets in many parts of Germany are adorned with fruit, vegetables and ears of corn. Front gardens are decorated with straw dolls. Carts and barrows, bedecked in a similar fashion, are pulled through the streets by men, women and children dressed in traditional costume, and everyone gets together for a big party. The reason for the festivities, which often last for several days, is “Erntedank” – Harvest Thanksgiving – which this year falls on 1 October.

Having enough food has always been important for humankind’s survival. Ever since people first settled in one place and began to farm sedentarily, their existence has depended on good harvests. For this reason, in many cultures and in all periods, there have been festivals where people propitiated evil spirits before the harvest or thanked the gods once it was safely gathered in.

In ancient Egypt, for example, festivities took place in spring in honour of Min, the god of plants and fertility. In autumn, the Greeks held a celebration in honour of Demeter, the goddess of the crops, while the Romans honoured Ceres, the goddess of grain. In the regions settled by the Saxons in the early Middle Ages, people worshipped Wotan, better known as Odin, the giver of the harvest. These festivals were often linked with sacrificial offerings, and this is still reflected in the customs of the Harvest Thanksgiving festival today.

In the Jewish tradition there are two festivals when God is thanked for the harvest. The week-long festival of  Schavuot is celebrated in May/June, after the grain harvest. Sukkot or the Feast of the Tabernacles, follows in September/October, after the grape harvest, and people also pray for the rain which will be needed for another fruitful year. In the Christian tradition, hope and gratitude for a good harvest are also deep-seated. It is not for nothing that the Lord’s Prayer, the most important prayer for Christians, contains the petition: “Give us this day our daily bread…”

In illustrations of the yearly round, agricultural scenes or symbols often take centre stage. In allegories of the seasons, summer is usually represented by grain and fruit, and autumn by grapes and vine leaves. In calendars, almanacs and depictions of the changing seasons, many harvest themes appear, with their associated festivals, especially in the months of July to September. An example can be seen in one of the panels from the “Augsburger Monatsbilder” (Augsburg Labours of the Months), dating from the first third of the 16th century, which is on display on the first floor of the permanent exhibition. In July we see men and women busy with the harvest. One of the harvesters has decorated his hat with flowers. In the next scene, of August, we see people dancing and making music, and above that a scene of the grape harvest, followed by September, with people busy at the wine press. 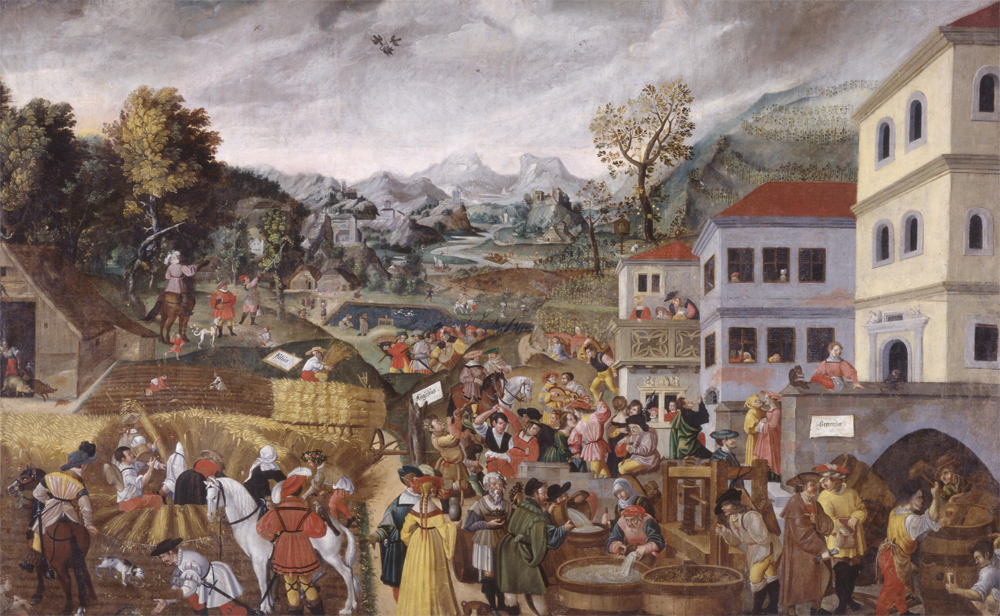 Augsburg Labours of the Months, July-August-September, around 1531 © DHM

Festival motifs connected with country life can also be seen in a 19th-century tapestry cycle depicting Swiss scenes, which is also in the permanent exhibition. In one of the tapestries, a group of men and women can be seen bringing in the hay. Some of them are already taking part in a celebratory dance. Another tapestry panel shows the ceremonial driving of the cows down from the Alps, accompanied by a dancing couple wearing garlands of flowers. Even today, in mountainous regions, the cattle which have been pastured in the mountains over the summer months are driven down to the valley, bedecked with bells, around the time of the harvest festival. 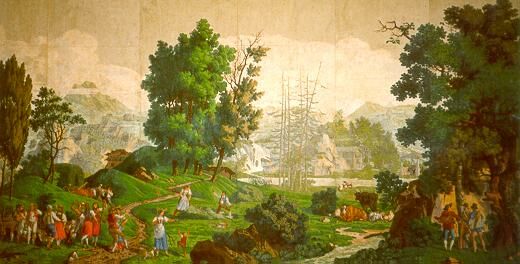 Harvest thanksgiving in the Christian calendar

Originally, there was no fixed date for Harvest Thanksgiving in Christian Europe. Often there were several such festivals during the year – the reason being that different types of fruit and grain are harvested at different times.

In the Christian tradition, the dates of festivals were often linked with saint’s days. In some regions, for example, the big Harvest Thanksgiving festival took place as early as St Bartholomew’s Day (24 August) or St Giles’ Day (1 September). Elsewhere it was celebrated on the first Sunday after Michaelmas (29 September), so that the festival usually fell on the first weekend in October. In 1773, the first Sunday after Michaelmas was officially declared to be the date of the Harvest Thanksgiving festival in Prussia. Since then, the date has been fixed throughout Germany as the first Sunday in October. In regions where the main crop is grapes, however, such as the Mosel Valley, communities often do not celebrate until November.

For many people today, Harvest Thanksgiving festivals are simply another opportunity to relax and enjoy themselves. The old customs have survived, however. In accordance with long Christian tradition, the festivities usually start with church services or processions. The parades with decorated carts still remind us today of the sacrificial offerings which used to be made. And the festive meals with dancing and games are a reminder of the party which the lord of the manor would throw to thank the harvesters for their work.

In an era of modern agriculture and global trade, people in Europe scarcely notice fluctuations in regional harvests caused by bad weather or other influences. In Germany, famine has long become a thing of the past. Nevertheless, even in modern Europe, a complete failure of the harvest would cause severe problems. So even today, Harvest Thanksgiving is an important festival: it reminds us that having enough food to eat is not something to be taken for granted.