In the wake of the First World War there were a total of 9.5 million displaced people in Europe around 1920, including a large group of refugees from Russia. The high number of refugees posed major challenges to Europe. To address the uncertain status of refugees, the Norwegian diplomat Fridtjof Nansen, as High Commissioner for Refugees of the League of Nations, pressed for an internationally valid travel and identity document. The League of Nations resolved to introduce such a document in Geneva on 5 July 1922: the “Nansen Passport”. Julia Franke, curator of the exhibition “1917. Revolution.” describes you how the idea about this passport came up.

Vladimir Nabokov called it “a very inferior document of a sickly green hue”. The Russian author came to Berlin in 1922 and experienced the formalities related to the application as an arduous burden:

“Its holder was little better than a criminal on parole and had to go through most hideous ordeals every time he wished to travel from one country to another, and the smaller the countries, the worse the fuss they made.”

Although the Nansen passport did not guarantee a right to long-term residency, it did grant its bearer certain rights and consular assistance, such as the official certification of his identity or of his marital status. As such, it provided a first supranational solution for an internationally recognized proof of identity and an internationally valid travel document.

How did the Nansen Passport come about in the first place? The events of the February Revolution, the abdication of the Tsar and the coming to power of the Bolsheviks in October 1917 brought with them persecution, expropriation and repression against numerous social groups. The Russian Civil War and the founding of the Soviet Union in 1922 further intensified the situation. A direct consequence was mass emigration from Russia: Well over one million people – by some estimates as many as two million – went into exile. After the founding of the Soviet Union in 1922, all persons who had previously left the country were formally rendered stateless. The so-called Nansen Passport was thus introduced in 1922 on the initiative of the renowned Norwegian Arctic explorer Fridtjof Nansen, at the time High Commissioner for Refugees at the League of Nations, as an international travel and identity document. The aim was to grant people without nationality a minimum degree of protection and freedom of movement. The passport, which was to be renewed on an annual basis, did not equate to a residency permit, but did allow the holder to re-enter the passport’s country of issue.

The responsible persons at the League of Nations initially worked on the assumption of a coming repatriation, but this proved illusory. Many refugees were unable or unwilling to return to their countries of origin. The Russian émigrés, for example, had no citizenship after the founding of the Soviet Union and were unable to have their identities confirmed by a recognized state.

The passport, initially valid only for Russian émigrés, was gradually expanded to include other groups of refugees: the Armenians in 1924, and other Christian minorities from the former Ottoman Empire in 1928. Fridtjof Nansen, the passport’s creator, was awarded the Nobel Peace Prize in 1922 for his humanitarian engagement. 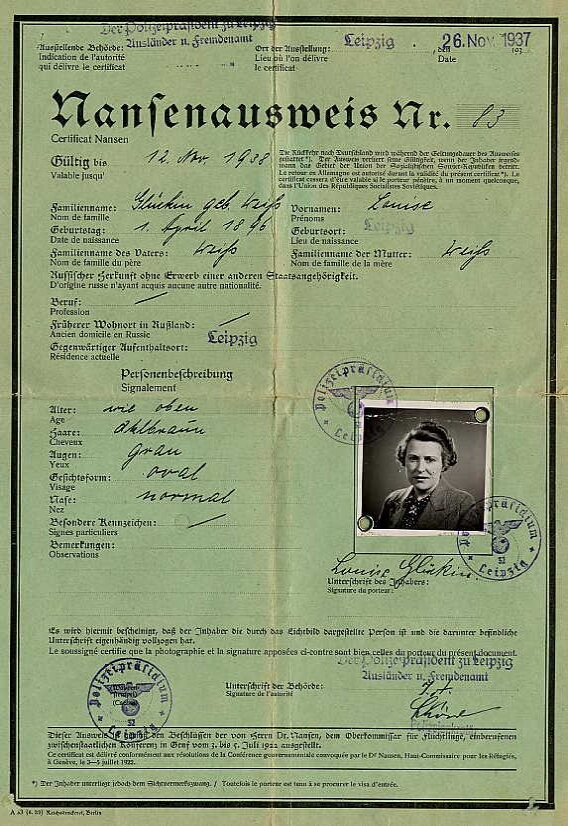 Currently on display as part of the exhibition “1917. Revolution. Russia and Europe” is the “Nansen Passport” of Tamara Matul. Born in Moscow in 1905, Tamara Matul moved to Berlin with her parents and her brother Sergej in 1920. The family lived at Nachodstrasse 26 in the district of Wilmersdorf. Matul later worked as an extra on films. This was how she made the acquaintance of Rudolf Sieber, the husband of Marlene Dietrich, and became his partner. From then on she travelled with the Sieber/Dietrich family – using her Nansen Passport – and went with them to the United States.