What’s That For? The Destroyed Main Board Once Containing the Snowden Files

Featured in the Internet section of our exhibition From Luther to Twitter: Media and the Public Sphere are the ground-down main board from a laptop belonging to the British newspaper The Guardian, where some of the leaked ‘Snowden Files’ had been stored. The curator Melanie Lyon provides some background to this highly symbolic act of destruction. 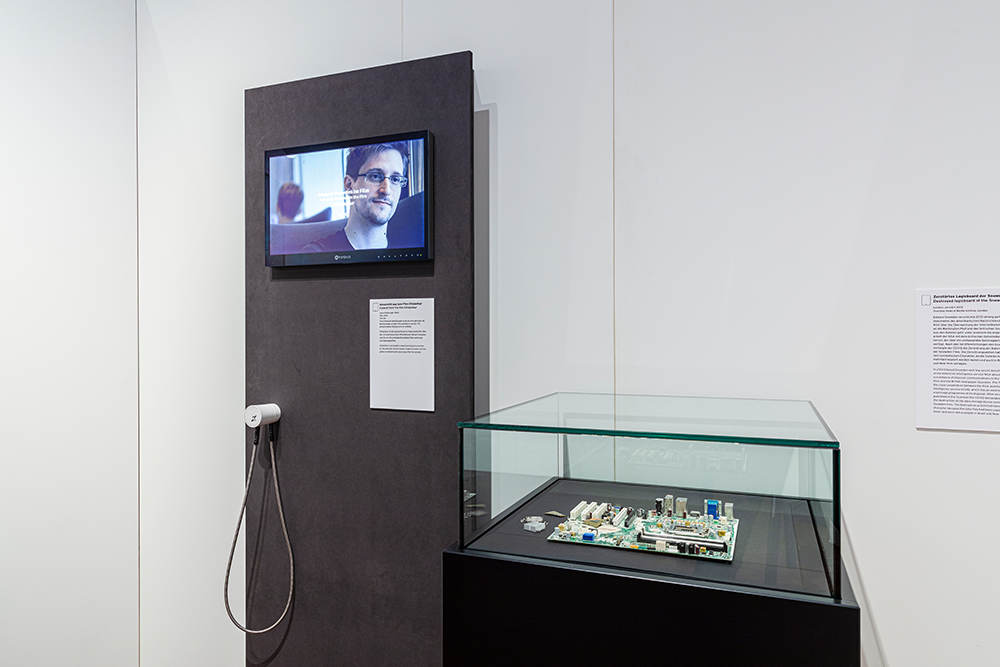 Edward Snowden was working as an IT specialist for various US intelligence agencies when he came across secret surveillance programs that had been set up in the aftermath of 9/11. Over the years, he came to realize that the US intelligence services and their allies were carrying out wall-to-wall surveillance on a mass, global scale, and hence in some instances in violation of national and international law. Having copied the documents undetected and wanting to provide proof of the agencies’ activities, Snowden left the United States in May 2013 carrying an estimated 1.7 million files classified top secret. Snowden was convinced the intelligence programs posed a threat to civil liberties, and that whistleblowing was the only way to defend the public interest. Selected journalists were then given access to his digital archive, including Glenn Greenwald and Ewen McAskill of The Guardian. The revelations led in June 2013 to the NSA scandal, over the course of which it became clear that security agencies had for some time been using digital tools to track not only of our emails and telephone calls, but also the metadata detailing our online searches and activities.

It wasn’t long before analysis of the Snowden files revealed that British intelligence services in particular were massively implicated in these surveillance measures. UK intelligence, for example, used Tempora spyware to tap directly into submarine cables in order to obtain telephone and Internet data. In July 2013, following the initial revelations about the collaboration between GCHQ and the NSA in the United States, the editors of The Guardian came under considerable pressure from the UK government. From the intelligence agencies’ perspective, the programs required the highest level of secrecy – the gist of their argument being that if you had nothing to hide, there was nothing to fear. The authorities demanded that the ‘stolen property’ be handed over. After some initial toing and froing, The Guardian agreed to a compromise solution. Instead of being surrendered, the cache of data would instead be ‘demonstrably destroyed’ under the supervision of the intelligence services. This would at least ensure the state would not become privy to other, as yet unpublished documents illegally copied by Snowden. In January 2014, The Guardian posted a video online of the hardware being destroyed. Shot in July 2013, the video shows three Guardian employees using an angle grinder and power drill to render the hardware useless and obliterate its content.

The incident weighs all the more heavily when you bear in mind that the UK’s constitutional framework does not guarantee press freedom. Courts can issue injunctions to prevent the media from reporting on stories if deemed a threat to national security. Snowden, whose efforts to avoid prosecution have left him stranded in Russia, believes that The Guardian didn’t so much compromise as buckle under state pressure. Talking to Greenwald, he was critical of how the contested boundaries of press freedom in the UK were not being fought out in public. The then editor-in-chief of The Guardian, Alan Rusbridger, by contrast, spoke of a ‘peculiarly pointless piece of symbolism that understands nothing about the digital age’. It was, after all, already on record that there were copies of the files in other locations – including at The Guardian’s own US bureau, from where journalists continued to cover the story.

Transparency and Secrecy in the Digital Age

Having been retained by The Guardian, the ‘Snowden Files’ have subsequently been shown at a number of exhibitions in the form of a damaged and erased logic board. It provides a visible embodiment of the various changes to the relationship between privacy, secrecy, and the public realm brought about by digital communications (an issue that is otherwise difficult to conceptualize in physical form): digital data may be easier to harvest, but it’s also hard to control – whether by ordinary citizens, journalists, intelligence services, or whistle blowers. Files can be erased from computer hardware, but there’s always a chance the data has long since been transferred elsewhere. First and foremost, then, the exhibit encapsulates the urgent need for a political and social debate about the fraught relationship between transparency and secrecy in a digital democracy, as represented in analogue form in these destroyed hard drives.