Last year, the Deutsches Historisches Museum was able to acquire for its collections a hatbox that once belonged to Prussian Field Marshal Blücher. In this article, the head of the DHM’s Militaria Collection, Dr Thomas Weissbrich, tells us about the object, its historical context, and two hats from the Battle of Waterloo. 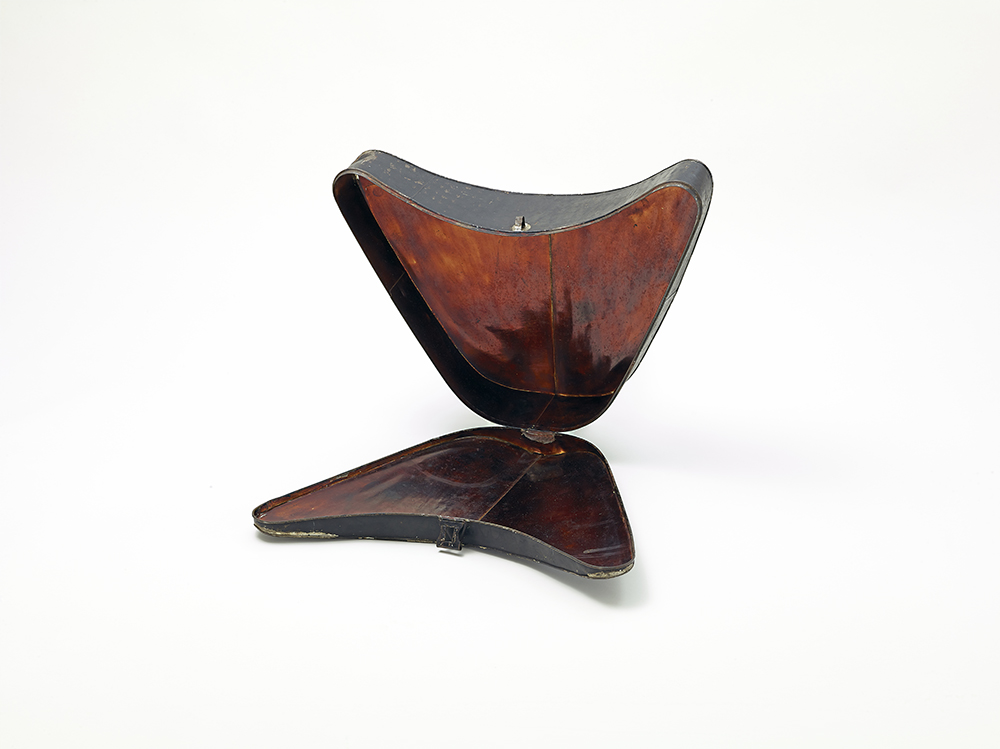 A large, black, sheet-metal case in the form of a bicorne hat. The name of the owner is engraved on a plate: “General Field Marshal Blücher” and under it the date: 1809. Hatboxes like this one were practical cases for transporting and protecting the headgear stored in them from possible damage. The campaigns, during which Prussian Field Marshal Gebhard Leberecht von Blücher carried the hatbox in his luggage, were anything but harmless. Two major battles were to turn him into one of the most popular commanders of Europe and a figure who became fixed in the common memory.

Blücher (1742–1819) was still a very young man when he enlisted in a Prussian Hussar regiment in 1760 to fight in the Seven Years’ War. In the following years he made a successful career as an officer. As a brigade commander he fought in the Battle of Auerstedt in 1806, a major defeat at the hands of the troops of Napoleon, Emperor of the French, who had conquered half of Europe. After the Treaties of Tilsit in 1807, Blücher raised his voice at the royal court in favour of Prussia’s further military involvement and of forming alliances against France, but without success. When he was promoted to Cavalry General in 1809, he was in non-active service. 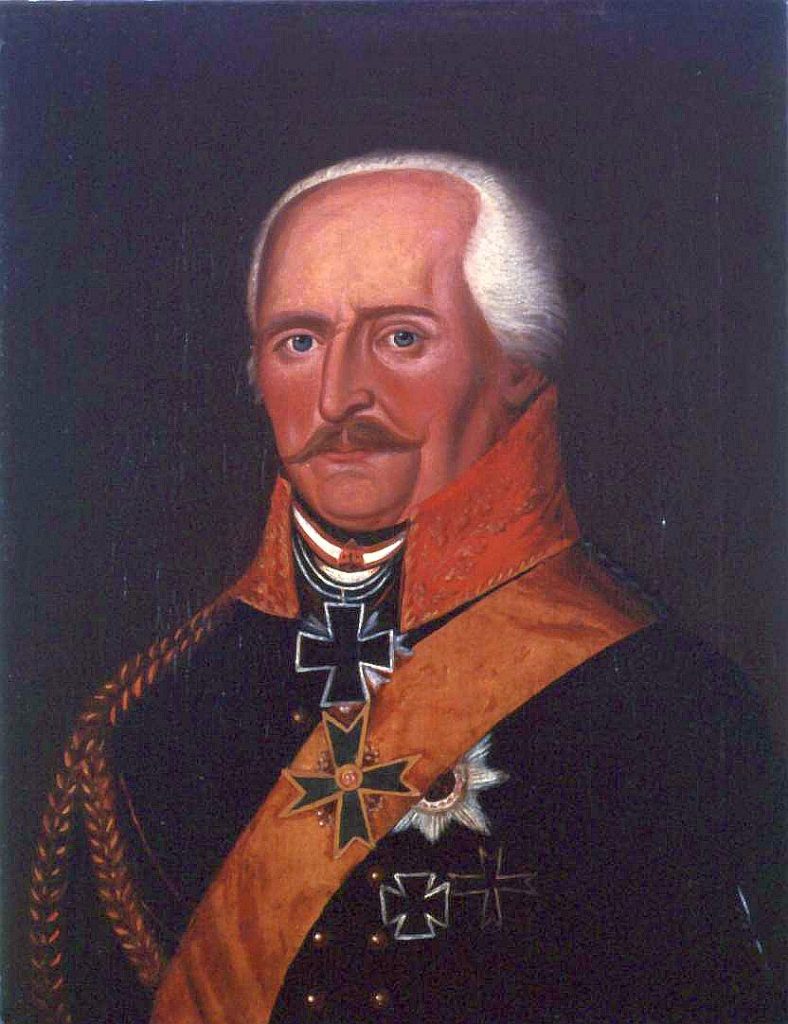 The Prussian-British meeting at Waterloo

In 1813 the hesitant Prussian King Friedrich Wilhelm III finally joined an alliance with Czarist Russia and declared war on France. Near Leipzig, around 600,000 soldiers participated in the three-day Battle of the Nations (16 – 19 October 1813), more than in any other battle in the 19th century. On the evening of 19 October, Blücher, then commander of the Prussian troops, had his men storm the city of Leipzig, which was still held by the French. Napoleon suffered a crushing defeat and was forced to retreat. He lost power, and as a result, further German states joined the Prussian-Russian coalition. The king awarded Blücher the highest military rank and later elevated him to Fürst (Prince) von Wahlstatt. General Field Marshal Blücher was celebrated in Prussia and other German states, but also in the circles of the allies, especially in Great Britain. The British had played a relatively minor role in the Battle of Leipzig, but their relief at the defeat of Napoleon was no less profound than that on the continent. In 1814 Blücher paid a short visit to London, where he was received with royal honours and greeted with enthusiasm.

Napoleon’s unexpected return from exile on the isle of Elba and his attempt to regain his lost power startled the coalition in the spring of 1815. Blücher was given the command of the Prussian army, while Arthur Wellesley, the Duke of Wellington, took command of the British-Dutch troops. Their plan was to stop the advance of the French campaign in Belgium.

Napoleon saw his chance to defeat the allies by attacking and beating the opposing armies separately. On 16 June Blücher’s Prussian contingent suffered a defeat near Ligny. The general field marshal came close to death during the battle when his horse was shot and he got caught beneath it when they fell. Two days later the French army engaged with Wellington’s forces near Waterloo. The outcome of this battle remained undecided for a long time. As the situation grew increasingly perilous for Wellington, he is alleged to have called out: “I want night or Blücher!”, meaning that only nightfall or the Prussian troops could save the day. In the evening, the Prussians, driven hastily forward by the injured Blücher, did in fact reach the battlefield and turned the tide in favour of the coalition. 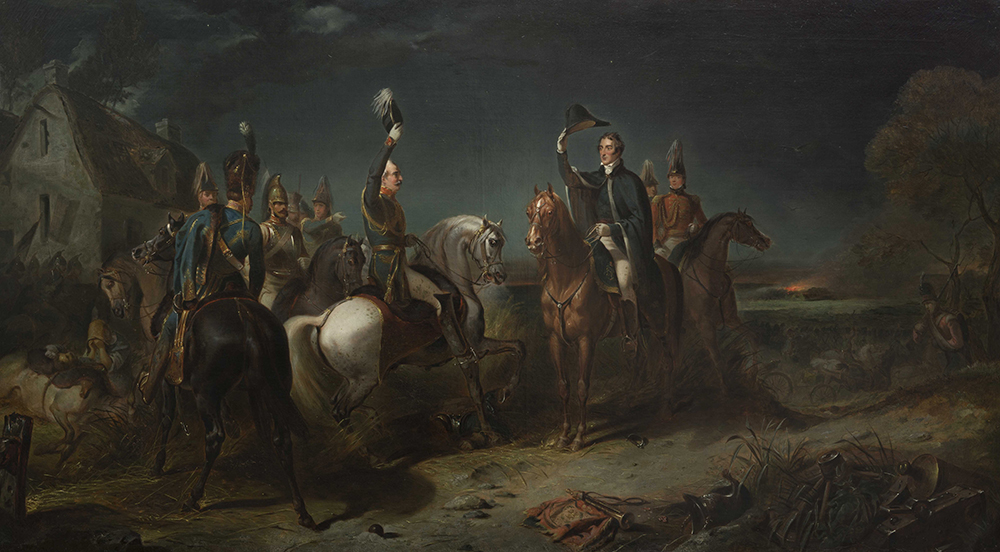 The meeting of the general field marshal and the duke in the inn in Belle-Alliance after the battle became the embodiment of Prussian-British cooperation and the jointly achieved victory. A number of artists rendered this scene in their artworks. In the painting by Thomas Jones Barker, Blücher’s hat is an important accessory, not, however, in its function as protection against wind and weather – it had poured during the battle – but as an expression of respect and appreciation. The two commanders, who had not met previously, raised their hats to each other. While it is fairly certain that Wellington wore a bicorne during the encounter as shown in the painting, there is no evidence to prove what kind of headgear Blücher was wearing. It is possible that it was a simple peaked cap.

Souvenirs of the Napoleonic Wars

British historiography counted the Battle of Waterloo among the great battles of world history, as the decisive victory over Napoleon, who was portrayed as a despot; in the Prussian version of history, however, the Battle of the Nations near Leipzig was far more important. It could be interpreted, like the so-called Wars of Liberation against Napoleon altogether, as an event that had awakened a pan-German national sentiment. The remembrance of it therefore occupied a permanent place in the Prussian-German view of history of the 19th century. It found expression not only in history books and stories, but also in private souvenirs and public monuments. Only a few years after Blücher’s death – he had died in 1819 in his castle, Schloss Krieblowitz near Breslau – King Friedrich Wilhelm III had a memorial erected in his honour in Berlin next to the Kronprinzenpalais. It shows a resolute, bareheaded commander, brandishing a sabre in his right hand and with his left foot placed on a captured cannon barrel.

The bronze monument has stood the test of time; the meanwhile patinated sculpture stands at Bebelplatz in Berlin-Mitte. By contrast, almost nothing from Blücher’s personal wardrobe has survived, neither a bicorne nor an officers’ coat or sash, not a cloak or trousers – which is typical of the relatively small amount of surviving paraphernalia, particularly textile objects. Much of what had not outgrown its usefulness and was therefore still worn got discarded in the course of two centuries. Blücher’s Star of the Grand Cross, a special version of the Iron Cross which was awarded only to him, was destroyed by fire in his castle in 1820. A peaked cap and six medals that had been kept in the Zeughaus were among the museum’s objects lost in the Second World War. 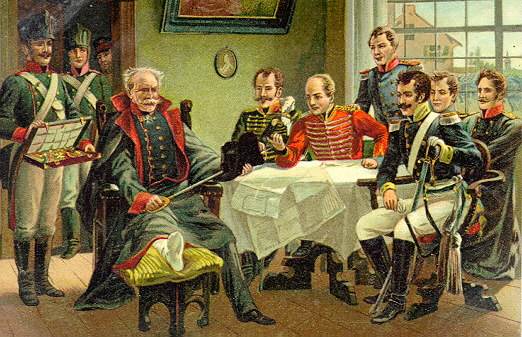 While only the hatbox is reminiscent of Blücher’s headgear, a bicorne belonging to his adversary from the Battle of Waterloo has survived – not without the assistance of the general field marshal himself. After the battle, Prussian soldiers captured Napoleon’s carriage, and in it a “petit chapeau”. This trophy was presented to Blücher in his quarters in Genappe, from whence it was brought to the royal art chamber in Berlin. After several other stations, the hat, well preserved, is now in the collection of the Deutsches Historisches Museum.