From the get-go, documenta made a splash as a major international festival of art. From the first to the tenth edition of documenta, visitor numbers increased fivefold. Dorothee Wierling, co-curator of the exhibition “documenta. Politics and Art” writes about the visitor demographic of the Kassel art show.

Contemporary art doesn’t always go down as a big draw with the general public – which makes the documenta success story all the more astonishing. The “100-day exhibition” has become one of the most popular yet laid-back art events in the world, generating much publicity and soaring audience numbers, and bringing an international flair to the city of Kassel. During the 20th century – that is, from the first documenta in 1955 to dX in 1997 – visitor numbers to the event increased almost fivefold. At first glance, this would seem to be an indicator of the documenta’s growing popularity and indeed accessibility over time. That was certainly the narrative that the organizers were keen to push. Which is why they tried to find out more about their audience very early on. In the 50s and 60s, visitor profiling remained rudimentary. But that all changed in 1977, at documenta 6, when computers were used for the first time to collect and evaluate visitor data (even though each questionnaire still had to be filled out by the appointed questioner by hand). In the 1990s, the profile studies took an even more professional turn, with a whole range of questions asked and evaluated, covering such things as social background (in other words: class), travel routes to and from the site, reasons for the visit, and length of stay. The motivation for such information-gathering was to shed light above all on documenta’s economic impact on Kassel. 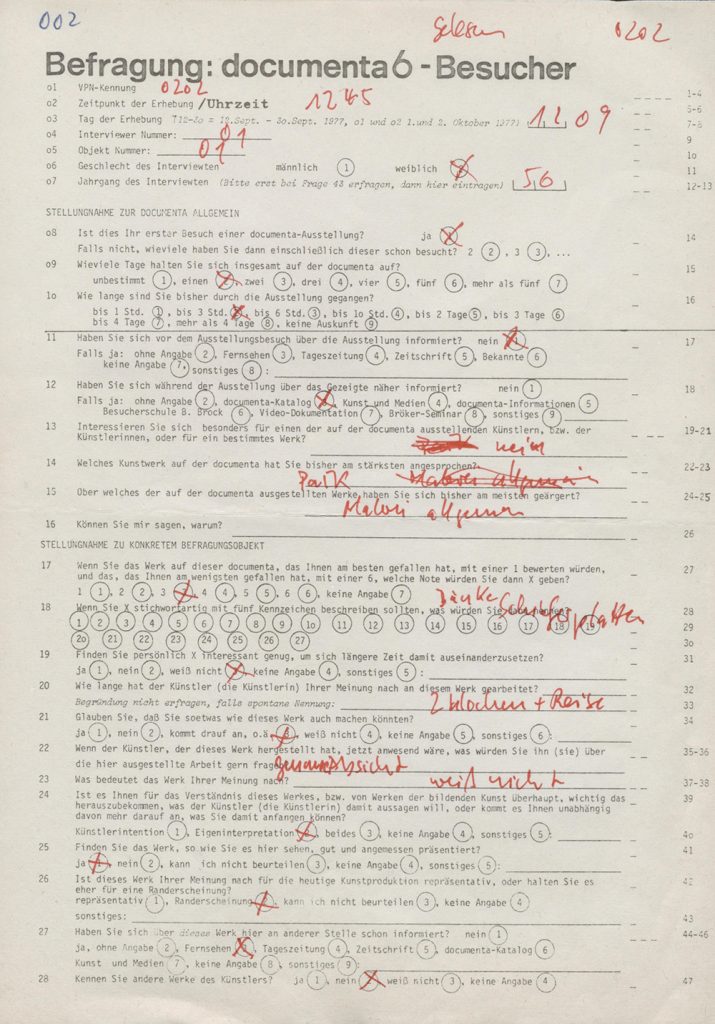 Of course, what makes the landmark event interesting from a social-historical perspective are the social backgrounds of its visitors. Two sets of data are particularly striking here: the age demographic and the demographic of educational background. It quickly becomes clear that one age group in particular is overrepresented at documenta: the so-called “young adults”, the 20 to 40-year-olds. While constituting roughly 30 percent of the population as a whole, they make up about 60 percent of the documenta audience. Even more pronounced is the overrepresentation of visitors with Abitur or baccalaureate-level degrees or even a university degree. They consistently make up three-quarters of the documenta audience. The documenta of the latter half of the 20th century was thus largely an event for younger, often highly educated people. Such a general observation holds true because this social profile remained a constant, with just slight variations at every documenta between 1955 and 1997. But how is that possible given the fact that visitor numbers shot through the roof in the same period? Wouldn’t such growth in numbers not also indicate an opening of the social hierarchy, a trickle-up effect, the democratization of the event and, by extension, the art? In fact, the opposite is true: for in the same period, the proportion of people with high-school diplomas (Abitur) in the population of West Germany and later, post reunification, the current Federal Republic of Germany increased twentyfold!

In the image it likes to convey to the public, the documenta has tended to be rather bashful about this fact, downplaying it in its own publicity. Images of visitors often show young modern people moving freely through the documenta grounds. Families and children seem to be welcome – attentive and inquisitive, they are seen immersing themselves in the art on display. Especially at the early documenta shows, this segment of the public stood for West-Germany’s new direction, its embrace of postwar modernity, openness, tolerance, and internationality. Private snapshots, on the other hand, more often show a motley crowd, with older visitors sometimes depicted in almost comical contrast to the modern art they are trying to digest. It wasn’t just the elderly who found the art foreign and incomprehensible, however – in fact, the vast majority of visitors struggled with it. While the documenta initially expected its visitors to get a handle on the art in their own way, it soon became clear that the visitors were in want of expert explanation, classification, and guidance. The audience was quick in the uptake of secondary material offered to it, and latched onto the catalogues (some running to several volumes) as an opportunity for in-depth study. This reflected the visiting public’s strong desire for learning; they felt dissatisfied at being left in the dark, and the position of uninformed spectator held little appeal. Open criticism of art at the documenta, on the other hand, was rare. When it was voiced, it centred on the pieces commissioned by the documenta for public spaces in Kassel, something which it started doing in the 1970s. The younger the visitor, it seems, the more likely they opened themselves up to viewing with an unbiased eye, feeling their way around the displays with an inquisitive mind that only occasionally would include rejecting the art on critical grounds. Yet the figure of the “hapless, abandoned visitor” would crop up again and again in the press coverage of every edition of the documenta.

Nevertheless, the audience was not always deferential and did not always doff its cap, as if on a visit to a conventional museum. Writing in an ironic article in his brochure on d7, the cultural philosopher and self-proclaimed “master of the visitor school” at the documenta, Bazon Brock, identified three types of visitors: the “stroller”, the “temple-goer”, and the “cultural tourist”. He characterized the latter as the bona fide expert assigning mental labels of “good, bad, good” while trotting round the exhibition at a quick pace. The “temple-goer”, on the other hand, would feel bound to pause in reverent admiration in front of each work of art, while the “stroller” would simply let herself drift like a flâneur, taking in a single work of art now and then at her leisure. Brock’s ironic classification still holds true today. The more apt question we perhaps should ask is: Which visitor type has survived the test of time and now prevails at the documentas of the 21st century?