The Zeughaus, the Deutsches Historisches Museum’s main building, is currently closed for renovation and the permanent exhibition “German History from the Middle Ages to the Fall of the Berlin Wall” is being carefully dismantled and put into storage. At the same time, the DHM is busy working on plans for a new Permanent Exhibition – a major project affecting all departments across the museum. In our interview series „5 Questions for…“, we give museum curators and staff the chance to talk about their personal memories of the last permanent exhibition and what they are working on now. This time we talked with textile conservator Jutta Peschke.

Ms. Peschke, the permanent exhibition shut in late June. Was there a particular object or segment that especially sticks out in your memory?

Jutta Peschke: Yes – those sections I thought were done particularly well. For example, recreations of interiors featuring a combination of different types of objects – including textiles. A presentation of historical textiles comes with a unique set of conservation requirements and challenges. The underlying mounts have to be an exact fit, while supporting the fabric evenly, without any strains. When making mounts, it is also necessary to select materials that are free of harmful substances that will not inadvertently age the fabrics, while also managing to recreate the silhouette in that period of costume history.
In the section on the Biedermeier period, for example, we went for full-figure costume displays – the full body effect as we like to say, with head, limbs, and feet. The fashionable hairstyles were recreated with strips of paper, and the footwear was also moulded out of paper. The display cases also contained several textiles and period furnishings. We also had a mannequin of a little girl standing in front of the cradle. All in all, we managed to create a lifelike impression and convey an atmosphere. In short, it was a good period recreation.
In other displays, on the other hand, we went in for a very pared-down presentation style, of using so-called “hollow bodies” (invisible mounts). Here, the focus was exclusively on the object itself, with the mount hardly noticeable at all. The invisible mounts were adapted to fit the silhouette of the respective garment. Again, the mount fulfilled a dressing and load-bearing function and its sole purpose was to present the garment.
Depending on the garments’ fragility and the fabric’s sensitivity to light, they had to be rotated over the course of the exhibition. 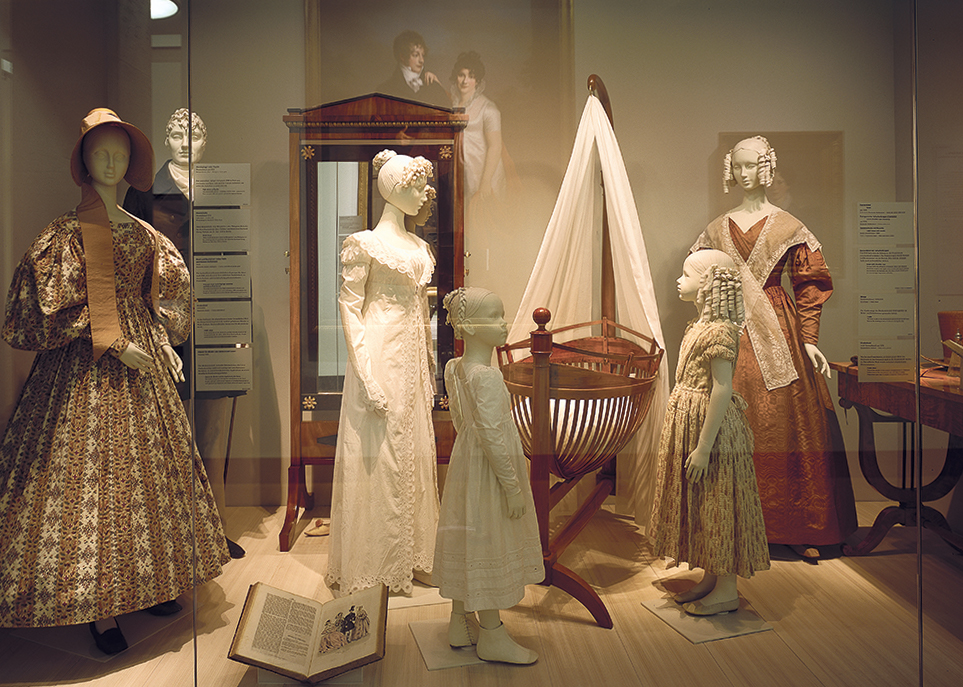 Biedermeier showcase in the former Permanent Exhibition at Zeughaus © DHM

Were you there for the instalment and opening of the last permanent exhibition in 2006? Does anything stick in your mind from that time?

I was there and of course I still remember it, because we worked flat out to get everything done in time. The opening date was set – with Chancellor Merkel due to attend. The deadline had to be met, and on some days we wouldn’t leave until ten at night. We had our nose to the grindstone for weeks on end. So of course we were all happy and relieved once everything was in place.

What’s the biggest challenge for you when it comes to dismantling the collection display?

Don’t get me wrong, it’s a lot of hard work too, but of a very different kind. For one thing, there’s no opening date pressing down on you. Which doesn’t mean to say we’ve got all the time in the world and aren’t working to a strict schedule. Only after the objects have been packed up do we start taking down the partition walls and display cases. Once they’re gone, the Zeughaus is completely empty; we hand over the keys, and the builders are called in.
We put our plans to paper long in advance: What we’d need for the dismantling, which areas would require (outside) help. Working out our packaging-material requirements and the shipping and storage crates for different objects – that’s essentially what we have to get done in the planning stages, before setting up our mobile dismantling stations in the galleries. The head of conservation, Martina Homolka, took over the planning logistics and coordination. For example, schedules were drawn up for heavy-duty vehicles, freight companies and art handling companies were called in to dismantle our custom-made display cases and glass cabinets requiring specialized equipment.
We started with our large textiles: the tapestries. They represent a particular challenge as they’re difficult to handle as objects. The Turkish tent from the Ottoman siege of Vienna is one such object requiring very special handling. 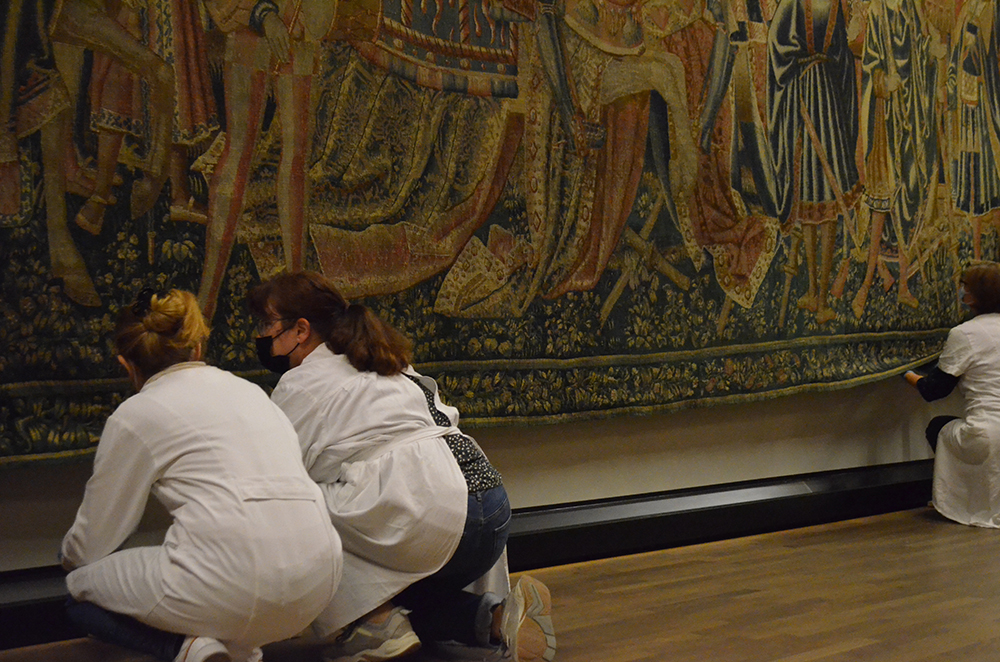 What always impresses me is the conceptual planning and teamwork that goes into creating a new exhibition project. It involves collaboration at every development stage: selecting the objects for each period display, discussions with the curators, exhibition design. When the exhibition layout is in place, we come in with our mobile workstations and start filling the space and partition walls with exhibits – it’s great to be part of the action. The exhibition starts to take shape, piece by piece. It’s a wonderful collaborative effort. Because we have temporary exhibitions on such quick rotation, we have lots of experience in exhibition installation and dismantling. It’s not like we only do this kind of thing once every fifteen years! But taking down the permanent exhibition takes it to the next level and is something else entirely.

Give us an idea of the scale of the exhibition. How many textiles did it contain and what kind of objects were there?

582 textiles were on display in the last permanent exhibition. The largest of them was the Turkish tent and the tapestries. The smallest was probably a beadwork “money cat”. A purse.
A fresh accession that went straight on view was the hooded plague mask. It was acquired by the museum just prior to the opening of its permanent exhibition. I did a thorough examination of the object and wrote a condition report assessing damage and deterioration. I also worked on its conservation and made its mount for the presentation. And I did all this in a short space of time. This piece has since travelled on numerous occasions since its accession; it was loaned to the British Museum and to museums in the USA. For this purpose, a shipping crate was custom-made to transport the piece without risk of damage. Each time we took the object out of the permanent exhibition, it gave us a chance to carry out further conservation treatments on it, which we hadn’t had time for at the start because it more or less went straight on view. These treatments also stabilized it further for transit. It is a very interesting object and also a very rare one.
When it first entered the collection, we still had to make a mount for it and find a cabinet for its presentation – and there were just eleven days to go before the opening! Which, believe you me, isn’t much time. That’s why I’m actually quite glad that it subsequently went on loan so often, because each time it gave me the chance to take it out again and complete the next conservation step on the list of proposed treatments. 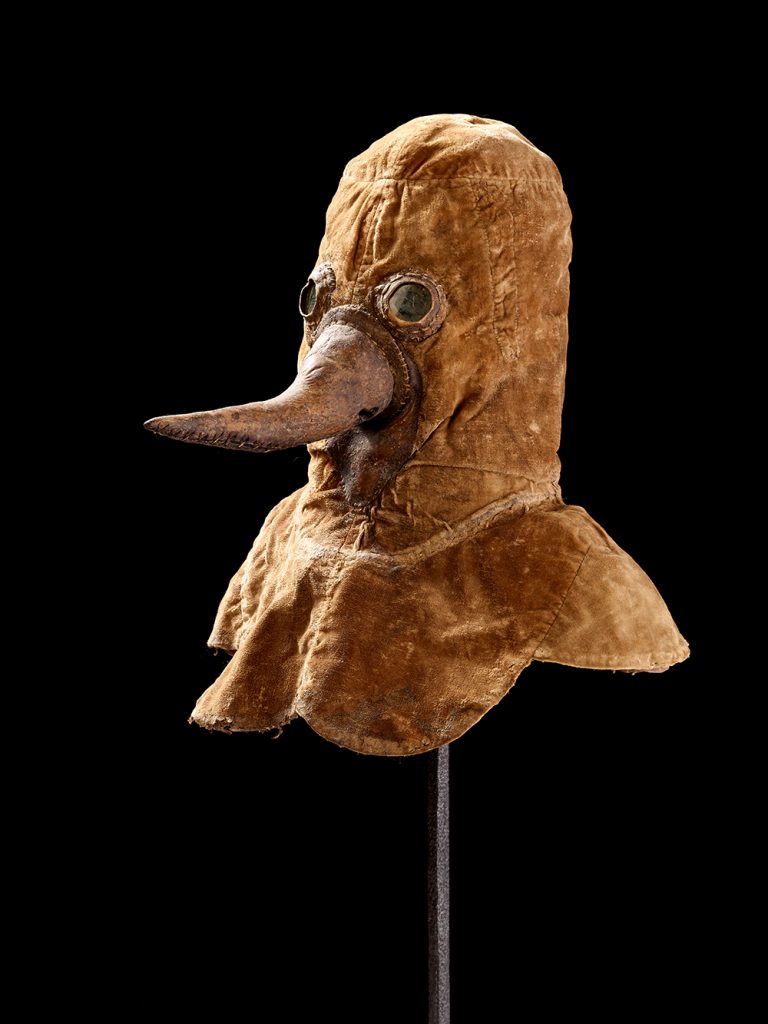 Is there anything we should bear in mind for the forthcoming Permanent Exhibition?

The historians are responsible for selecting the objects and envisioning the thematic sections, and the DHM’s collection is truly massive. So I don’t have to worry about curation. I do worry, however, that there will be fewer objects on show in the future exhibition because digital displays and interactive screens keep taking up more and more space in exhibits. They can be an enriching experience, but they should be used in moderation, in relation to the original artefacts and not overcrowd them or replace them entirely. In planning the future permanent exhibition, we have already discussed ideas with the curator. We pointed out that when presenting textiles we should pay attention to the reasons behind our choice of display format. We also pointed out that in the future, when making the custom-made display cases, we should aim to have doors built in, making it possible to exchange or rotate objects without having to dismantle the whole cabinet. Some of the previous showcases were unfortunately only accessible from one side, making changing the exhibits a complicated procedure. This experience should be taken into account in the future exhibition design.
We have so many interesting objects to choose from; I can’t say which object I would like to see the most in the new permanent exhibition. Of course, after working with an object closely over time, it starts taking on a special meaning. The plague mask stands out in this regard, but so do the tapestries. They were impressive due to their variety of design and the craftsmanship that went into them.