Plague and Cholera and Corona

The corona pandemic has triggered not only a medical, but also a global social crisis. The number of people infected or dead is rapidly growing across the world. The media call it a sea change and report on how the world will be transformed after corona. In his DHM blog, the historian Robert Kluth takes a look at the pandemic and asks how such epidemics as the plague and cholera have given rise to social achievements in the past.

A look back in history

Let’s imagine a visitor. She enters the Permanent Exhibition and finds herself in the area devoted to the Middle Ages. Here the walls are light grey. She continues past the portrait of Martin Luther: Reformation period. A new epoch begins, flanked by dark red walls. The arrangement of the exhibition clearly shows that here something old ends and something new begins.

The question arises: Were earlier epidemics already signs of a new time reckoning? Let’s take a look at two epidemics that have embedded themselves deeply in European memory and language. In German, if you are standing before a difficult decision, it’s a choice between “plague and cholera”. Will “corona” join this list of choices in the future?

The Plague, or: In search of a scapegoat

1347 brought the most notorious outbreak of the plague in Europe, the “Black Death”. By the end of the pandemic it is estimated that a third of the European population, 25 million people, were dead. Today we know that bubonic and pneumonic plague is caused by bacteria. It is spread through fleas carried by rats and through person-to-person contact.[1] At the time, people did not understand what was happening, sought refuge in conspiracy theories, and blamed the Jews, who had supposedly poisoned the wells. This erroneous belief erupted with 86 different pogroms in the Holy Roman Empire of the German Nation; numerous Jewish communities were destroyed and Jews murdered.[2] 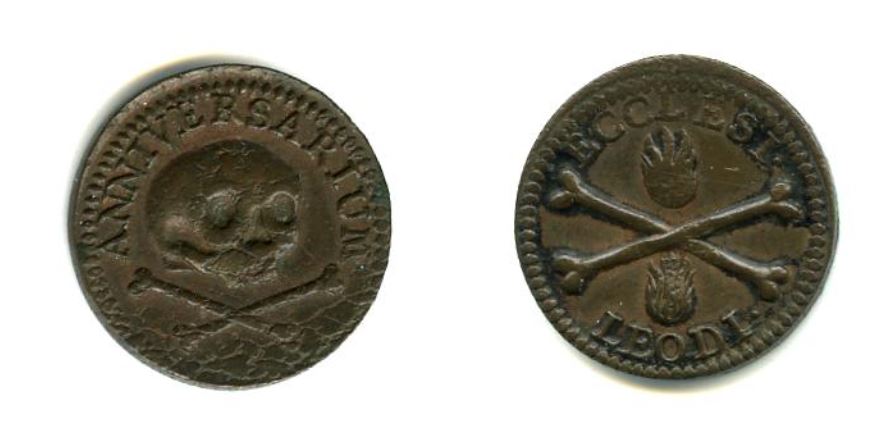 The notion that God punishes people for their sins was widespread. A book from the Early Modern Age showed that “swearing and slandering”, “gorging and boozing”, and “lying and cheating” were causes of the disease.[3] The idea that sinful, divisive behaviour promotes the sickness, while good behaviour combats it, still finds belief today.

The authorities reacted with measures against the plague. The “quarantine” was introduced, sick people were isolated from healthy people. It is notable that the isolation should last 40 days, i.e., “quarante” – derived from the Latin – the exact number of days needed to achieve atonement in the Middle Ages.[4] 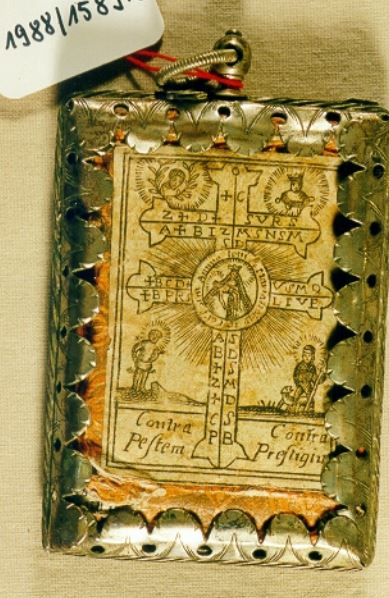 After the plague pandemic, the population was sharply reduced and therefore the labour force was in short supply. Some researchers argue that, following the plague, the development of technical innovations – such as the printing press or the waterwheel – was fostered in order to replace the lost manpower. Book printing is considered a milestone in the shifting of the epoch from the Middle Ages to the Renaissance. The plague made printing possible,[5] but was not itself a sign of a new epoch. It was only the flood of information brought about through the printing press that has allowed historians to speak of a new era: the “Early Modern Age”.

The plague had barely disappeared from Europe when cholera made its appearance. The epidemic was spread in the 19th century by infected drinking water. The illness led to death, quickly and in full consciousness. For a long time no one knew how to deal with cholera. Similar to our corona times, many different methods were tested in an attempt to get the unknown disease under control. Letters were smoked, bank notes washed, and traditional quarantine put in force because it had helped during the plague. But again, conspiracy beliefs ran rampant. The rich were afraid of the poor, who were thought to be the carriers of the “new pestilence”. The poor were afraid that they would be “poisoned” by the rich, who, they claimed, wanted the get rid of the problem of unemployment with the aid of the “Blue Death”.[6] In the Permanent Exhibition these two social groups are placed symbolically opposite each other: on the one side, the tinware and tenement blocks of the workers, directly across from it, the luxuriously furnished living space of the wealthy bourgeois upper class. 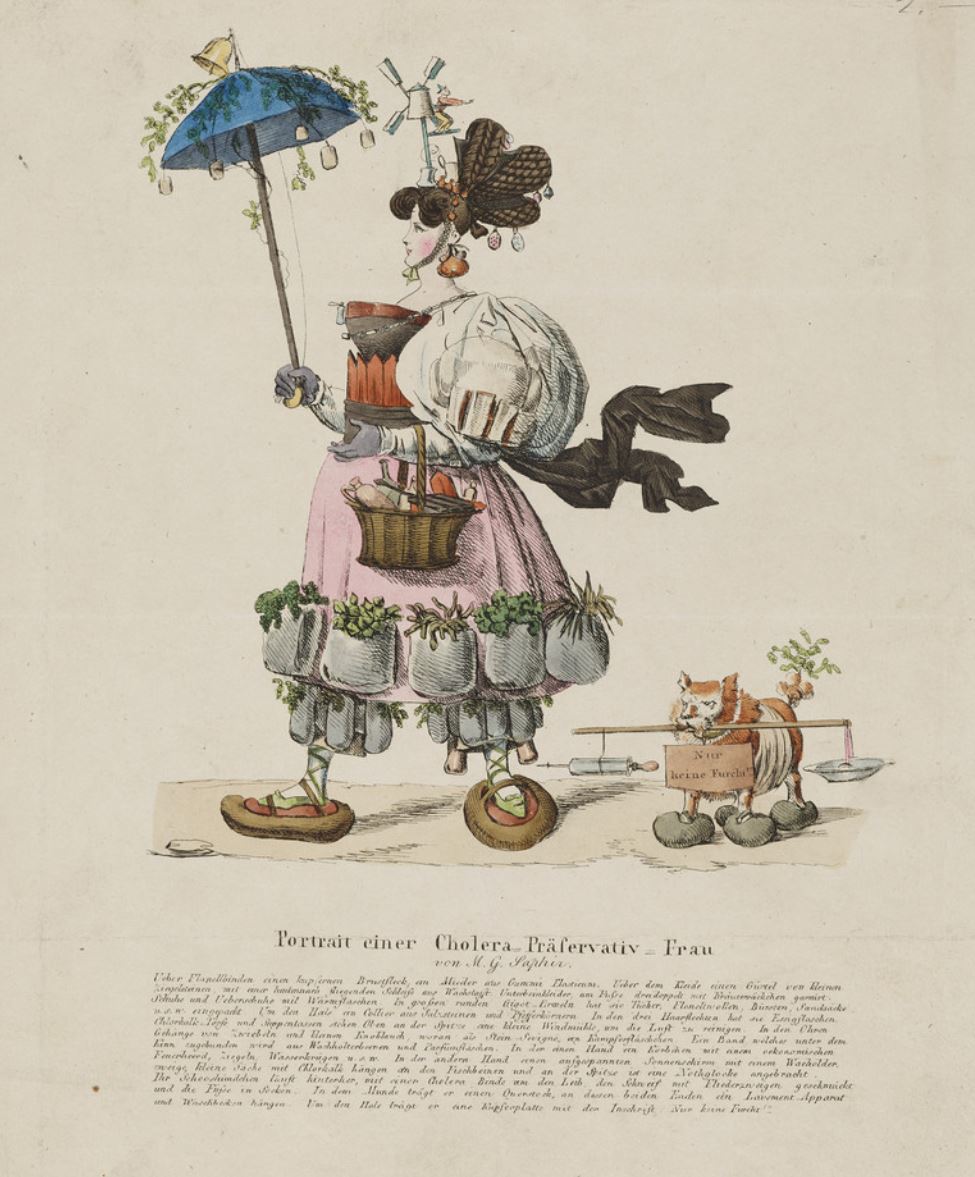 Caricature of the fear of cholera, portrait of a cholera preserver, Moritz Gottlieb Saphir, Nuremberg, between 1830 and 1837 © DHM

Better water for the city

The disease did, in fact, reveal major social differences. In the Hamburg quarter “Gängeviertel” with its narrow alleyways, people lived in close proximity in the 19th century, with little sun and few sanitary facilities. 128 years ago, on 14 August, the last cholera epidemic broke out in Germany. Poor living conditions and a lack of a modern water supply system – unfiltered drinking water was taken straight from the Elbe River – led to the rapid proliferation of the bacteria. The wealthy fled the city. The bacteriologist Robert Koch was sent to Hamburg. Displayed in the Permanent Exhibition is the instrument that made Koch’s discovery of the bacteria possible: with this microscope he first caught sight of the tiny pathogens. On his advice, the schools were closed and germ-free food was distributed on the public squares. None the less, more than 8,200 people died of cholera in Hamburg.

In neighbouring Altona, on the other hand, only a few people died of the disease: here they already had a water filtration system. People learned a lesson from the cholera outbreak: it is not only more attractive, but also healthier to live in cities with rubbish collection, functioning canalization, and municipal sanitation. Hygiene is not an extravagant luxury, but rather an economic necessity. Otherwise cholera would have locked down all public life. Hamburg quickly began to build a filtration plant.[7] 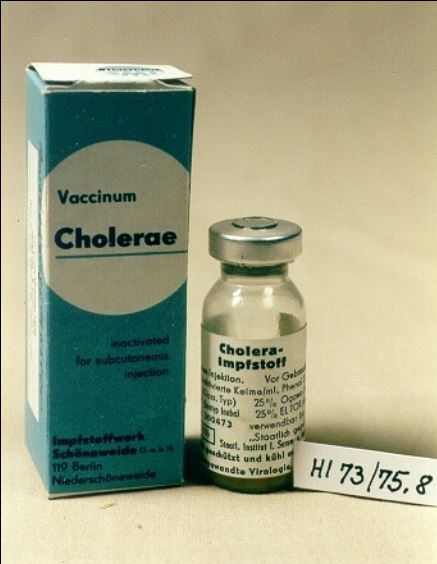 Are epidemics signs of an epochal threshold?

Our museum visitor has wandered on to the 1930s. She is now standing in front of the “Transparent Man”. At the time this object represented a transparent image of medical knowledge. Everything that was known about the human being seemed to be explained and under control: heart, kidneys, blood circulation, bacteria, virus. It is forgotten that Robert Koch discovered the cholera bacillus in 1884, but it took 20 years to find a simple and cheap therapy for the disease. Have we also forgotten in 2020 that pandemics exist?

Epidemics are more the rule than the exception in human history. What is new about the current pandemic is that the conditions have changed. It is occurring in times of medial-capitalistic acceleration, when the economy is dependent on short-term global supply chains and the media offer information in real time, which can then go “viral”.

Corona, like earlier epidemics, is a catalyst for phenomena that are already in existence. While the plague and cholera fostered printing and municipal water supplies, corona seems to facilitate online conferences, clean air, and digital distance teaching. In short, corona has accelerated the digitalization of the worlds of work and education and reinforced the desire for a sustainable economy and lifestyle. But we are not therefore standing on the threshold of a new epoch.