In 1944, Marta Mierendorff was drafted for labour service as a stenographer in the stone sculpture workshops of the “divinely gifted” artist Arno Breker in Wriezen/Oder, where during the Second World War workers were forced to participate in the production of Breker’s monumental sculptures and reliefs. After the war she tried to inform the public about conditions in the workshops and to encourage critical reporting about Arno Breker – with little success, as Dr Swantje Greve, research associate for the exhibition “’Divinely Gifted’ National Socialism’s Favoured Artists in the Federal Republic”, describes below.

Marta Mierendorff was born to a working-class family in Berlin-Charlottenburg in 1911. After training to be a saleswoman, she began learning stenography and typewriting and worked in various offices. In 1932, she met the law student Gottfried Salomon, who as a Jew was forcibly ex-matriculated shortly after the National Socialists took power. At the end of the 1930s, Marta Mierendorff was temporarily drafted to work in an armament factory as a stenographer. After being released from this compulsory service, she took advantage of the shortage of stenographers and founded her own “writing room”. This also served to protect her fiancé – in 1939, Marta Mierendorff and Gottfried Salomon had become engaged – because the constant stream of visitors helped to cover up Salomon’s presence. But in 1943, he gave up this protection: he voluntarily accompanied his mother when she was deported to Theresienstadt. In 1944, Salomon was murdered in the concentration camp Auschwitz, which Marta Mierendorff only learned about after the war. His mother survived the detention and was taken in by Marta Mierendorff when the war ended.

Encouraged by her fiancé, Marta Mierendorff had successfully passed an examination for talented students and began to study in October 1943. But she already had to break off her studies at the beginning of 1944, because she was again drafted for labour service, this time in Arno Breker’s stone sculpture workshops in the Oderbruch near Wriezen. There she worked as a stenographer until February 1945, shortly before the Soviet Army reached the workshops. She experienced the end of the war in Berlin. [1]

Construction of the Stone Sculpture Workshops Arno Breker GmbH began in summer 1941; work started there in July 1942. Arno Breker’s monumental, heroic sculptural works were produced for the extensive remodelling of Berlin, the capital of the German Reich, as well as for the Nazi Party rally grounds in Nuremberg. The huge blocks of marble and granite were shipped by boat across the Oder River to the workshops’ own port, where there were railway tracks and crane facilities, huge work and storage halls, and barracks for the workers – altogether a plant of industrial proportions. Here it was possible to make the larger-than-life sculptures and huge reliefs that demonstrated the Nazis’ megalomania. [2]

The workforce in the stone sculpture workshops grew rapidly. While 16 people were occupied in Wriezen in 1942 – including German, Italian and French sculptors – by 1944 the number had grown to 180. [3] With the immense staff and modern technical facilities, Arno Breker was able to produce his works like no other sculptor of that period – and this during the war and despite the shortage of materials. Breker was able to take in horrendous earnings from these works. Between December 1940 and October 1943, he received almost 3.5 million Reichmarks for the sculptural works intended alone for the Reich capital Berlin. [4]

When Marta Mierendorff was enlisted as an office worker in the stone sculpture workshops in Wriezen in 1944, work there was already in full swing. In a memoir from the post-war years, she describes the conditions in the workshops, where French and Italian prisoners of war were forced to work – later Polish and Ukrainian prisoners as well. The French received preferential treatment by the Francophile Breker, while all the others suffered from the heavy workload and poor provisions. Starting in the summer of 1944, Breker put on cinema and theatre performances, but only for the Germans and French. All the other workers were excluded from such entertainment. Until the end, i.e., still in January 1945, Breker organised parties with lordly banquets, to which Breker invited the wives and children of prominent Nazis, who had been evacuated to Wriezen because of the bombing in Berlin. At the end of 1945, Breker and his wife sought refuge in Bavaria, leaving the workers behind to fend for themselves, with no previous warning. [5]

In her report, Mierendorff described herself as a “witness to the demise of the works”. While in 1947, in the immediate post-war period, she had expressed herself in a positive way about Breker and even exonerated him with a “clean bill of health” that was put to use in his denazification proceedings, [6] she soon changed her approach. This possibly had to do with the way Breker had portrayed himself and the conditions in Wriezen in connection with the denazification hearings. In 1947, he wrote in a resumé of his life: “The workshops in Wriezen were considered far beyond the borders of Germany as a paramount example of social care and exemplary European cooperation with foreign citizens.” [7] Further, Breker wrote about the good provisioning, high wages and “tastefully furnished” rooms for the employees – a virtual “isle of peace amidst the chaos of war.” [8] 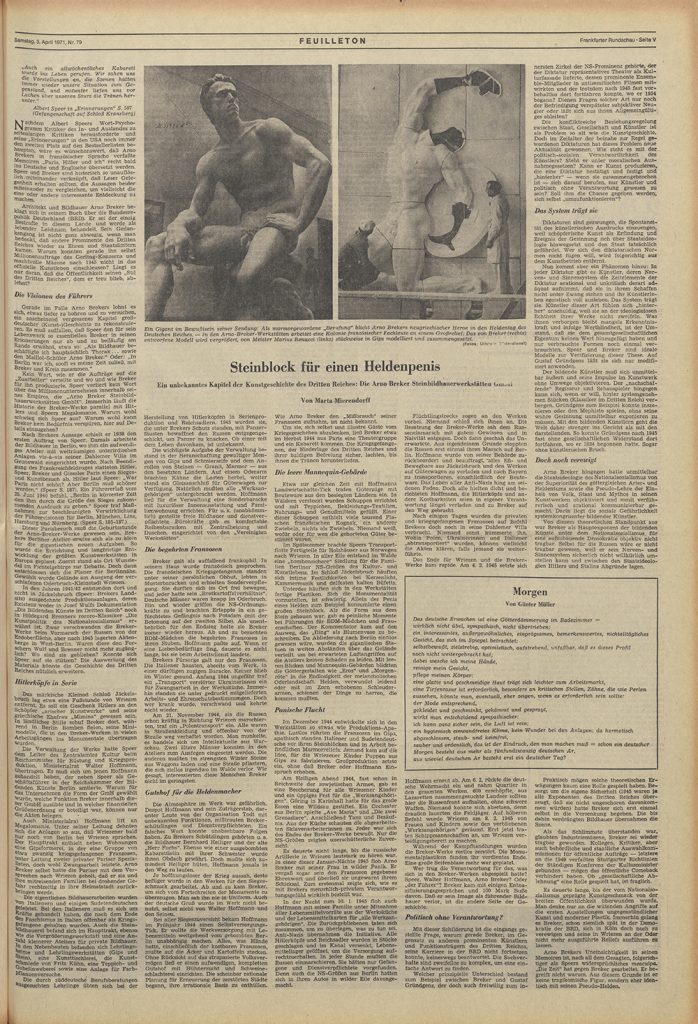 Whether this falsifying description, which completely distorted the conditions in Wriezen, was the reason or not: starting in the 1960s, Marta Mierendorff tried to publicise her knowledge of the Stone Sculpture Workshops Arno Breker GmbH and to point out the injustice committed there. She approached newspapers and magazines. Although the editors usually professed their interest during the initial contact with Mierendorff, their commitment always petered out. She also tried to interest the Jewish Community in Berlin, the Association of the Victims of the Nazi Regime, and the Academy of the Arts in Berlin about the happenings in the final war years in Wriezen, but here, too, no critical reappraisal came about. [9] A full-page article written by Marta Mierendorff that appeared in the Frankfurter Rundschau on 3 April 1971 faded away with no echo. [10] At the beginning of the 1980s in particular, she again increased her attempts to publicise the topic. On the occasion of an Arno Breker exhibition in the West Berlin art gallery Club d’Art in 1981 which included works of the sculptor from the Nazi period, it came in Berlin to hefty protest actions, public demonstrations, candlelight vigils and a signature campaign in the Tagesspiegel. In this context, a 15-minute documentary was even produced under the title “Breker, or Nothing Learned”, which echoed the protests and critically challenged Breker’s career. [11] But even in this heated-up cultural-political climate, Marta Mierendorff was unable to awaken interest in the report of her experience. Der Spiegel responded that they had no interest in a reportage because her report treated a “much too marginal event in contemporary history”. [12]

After the Second World War, Marta Mierendorff first stayed in Berlin, where she earned her doctorate from Humboldt University. In the subsequent years she was active in the labour movement and in 1954 founded, together with the abstract artist Heinrich Tost, the “Institute for Art Sociology” in Berlin with the educational aim of counteracting the consequences of the National Socialist art teachings and thus contributing to a democratisation of art and cultural life. She was also engaged in the campaign for the recognition of marriages that had been contracted in the underground during the Nazi period and achieved their retroactive legitimisation – and thus also the recognition of her own marriage with Gottfried Salomon – they had taken their vows in August 1939. In the mid-1960s, Marta Mierendorff settled in Los Angeles, increasingly turning to exile research, particularly in the areas of literature, theatre and film. For her work on exiles she was appointed professor at the University of Southern California in Los Angeles in 1970. Marta Mierendorff, who received American citizenship in 1978 and was honoured in 1980 with the First Class Cross of Merit of the Federal Republic, can unquestionably be called a pioneer of exile research. [13]