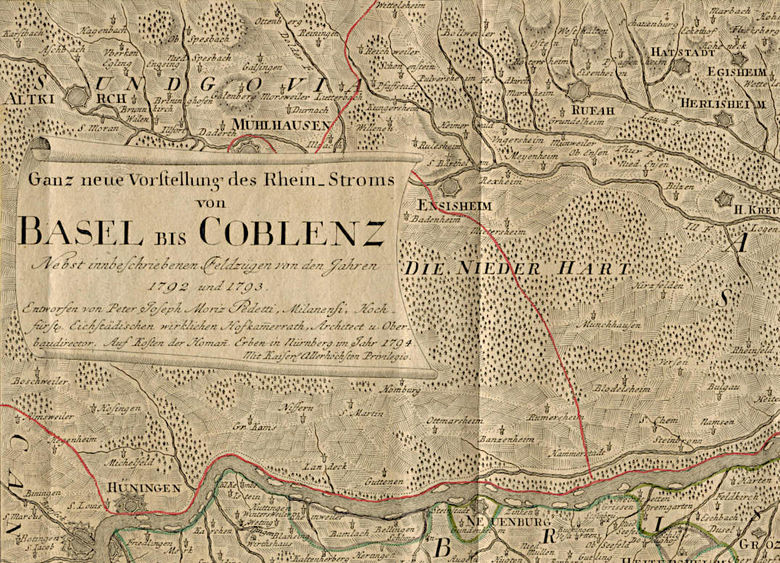 Through their rolled-up sides and edges, the ornamental frame holding the map’s copious texts resembles a scroll. The German word “Kartusche” (“Legend”) derives from the French “cartouche”, meaning roll of paper. From the Renaissance to the 19th Century, the legend’s motif was used as an ornamental frame for coats of arms, inscriptions and portraits. Even when they are plain and no longer decked out in the figural baroque style, the engraver went to the trouble of presenting it as a scroll. The legend’s title contains basic information on the subject, the author, the person who commissioned it, and the maps’s date of origin.

It is a thematic map accentuating the course of the border between German and French territories along the Rhine from Basel to Koblenz. The German territories were threatened by the French Revolutionary Army’s offensives in 1792 and 1793. The corresponding French campaigns and the German reactions to them are described in the three texts of the legend, but are not presented pictorially. It concerns the first two years of the Coalition Wars between revolutionary France and (at first) Austria, then Prussia along with other smaller German states. In 1794, the war was a long way from being over. Austria only eventually recognised the Rhine as the French border through the Peace of Campo Formio in 1797.

Who designed the map?

The occupation of cartographer did not yet exist in the late 18th Century. Only a few specialists such as Gerhard Mercator dedicated themselves specifically to cartography. Many of the cartographers of the time were scientists, publishers or engineers. Peter Joseph Moritz Pedetti grew up in an Italian family of artists and architects. He developed an ability to draw from an early age. At sixteen, he was a draughtsman in the Ansbach court building authority. This was followed by numerous positions as an architect at German courts as well as in Denmark and Poland, until he became director and judicial officer of the Eichstätt court building authority. He held this position until his death in 1799, leaving numerous buildings in the interrim period between baroque and classicism which still stand in Eichstätt today. His 300th birthday was celebrated in 2019. Pedetti was 76 years-old when he created this map. The company “Homännische Erben” took care of the typographical reproduction and its financing.

Who commissioned the map?

Johann Baptist Homann was a cartographer, publisher and engraver in Nuremberg. With the founding of his publishing house for “cartography” in 1702, he became the leading German publisher of maps, atlases and globes. When he died in 1724, his business was passed down to his son, who in turn handed it on to two managing directors with the obligation of continuing it under the name “Homännische Erben”. By around 1760, the publishing house had 550 maps on offer. Even at this time, it was a speciality of theirs to date the maps and name the author. The business closed when its last owner died in 1848. The extensive collection of maps belonging to the “Homännische Erben” was unfortunately not preserved.