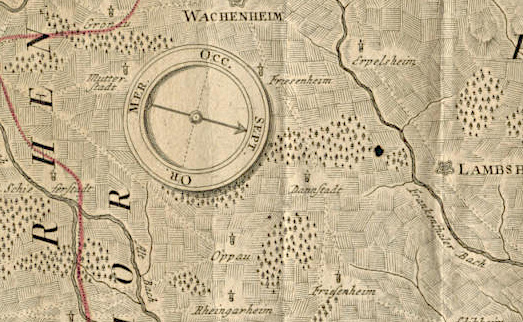 Orientation of the map

The map of the Rhine is oriented to the west. This is unusual for the viewer, as almost all of today’s maps are oriented to the north. The Rhine flows from left to right. Up until the 15th Century, christian maps of the world displayed the orient above, as Jerusalem was located there. The maps also faced the orient –the word “orientate” (“align to the east”) is derived from this.

Even in the 19th Century, maps were also oriented to the south or positioned according to mountains or coasts. There was, however (as there is here), almost always a compass. The compass points here are labelled in the new latin language:

The horizontal depiction of the Rhine and the western orientation were surely chosen because in doing so, the map was oriented towards the French enemy. This is also the case with the “Schmitt’schen Map of South-west Germany” also oriented to France and therefore positioned to the west. This map was created after the First Coalition War had begun. The map, commissioned by the last emperor of the Holy Roman Empire in 1792, consists of 198 hand-coloured sheets (75 x 76cm).

The detail shown was enough for it to be kept under lock and key in the Vienna war Archives (Kriegsarchiv) for military reasons. In contrast to the Schmitt’schen map that remained secret due to its precision, the publisher “Homännische Erben”’s four-sheet map of the Rhine was available to a wider public, as it was always intended to be for sale.