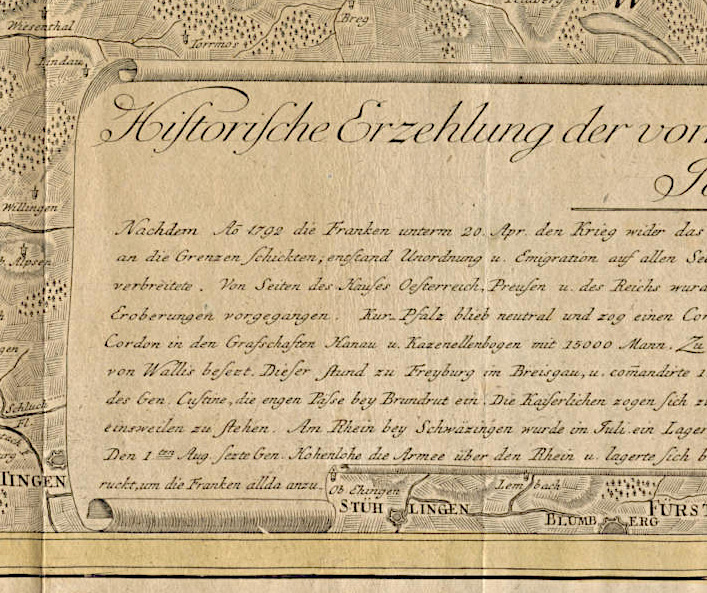 Descriptions of the military campaigns

One of the main characteristics of the Rhine map are the extensive descriptions of the military campaigns in 1792 and 1793. They take up almost half of the document.

In its extraordinarily large format, the map combines a graphically spatial depiction of multiple regions with the kind of textual information that one would expect from a book or newspaper. It seems that the author only thought it possible to illustrate the complex sequence of attacks and counter-attacks through the use of text. However, it is the geographical depiction that allows the viewer to spatially locate and relate the important battles of the war.

The unusual combination of map and text in these contemporary developments surely explains why the publisher promoted this depiction of the Rhine as something “altogether new”.

What is being described in the texts?

The historical narrative begins with the French declaration of war against Austria on 20th April 1792 and its immediate consequences : “[...] Disorder and emigration on all sides, and Germany has become the foreign France [...]”. Then the troops gathered by the smaller German territores – also displayed on the map - are counted: Electoral Palatine, Hessen-Kassel, and Breisgau. French emigrants arrived in Worms. Specifics regarding the conquests are then given: General Custine’s 18,000 men conqurered Speyer, then Worms; finally Mainz (20th October 1792) and Frankfurt (22nd October 1972) were taken.

Description of the reconquering of Frankfurt

On 2nd December 1792, Prussian and Hessian troops liberated Frankfurt from a six-week long occupation by the French Revolutionary Army. In the second text scroll, at the level where it is ripped, the careful viewer is able to read the description of Frankfurt’s recapture :
[...] The attack came at 9 in the morning. After a fierce cannonade, the gates opened in 1 ½ hours. A fiery engagement ensued. Lines and lines of troops finally threw down their weapons, and shouted to the King of Prussia “Vive le Roi: Pardon”... There were 400 deaths. Gen. Helden, along with 1,200 men and 65 officers were taken prisoner. The Hessians lost 150 men and 3 officers, and 8 men were wounded. [...]

However, the given number of 150 fallen Hessians does not correspond with the 82 Hessian soldiers immortalised by the “Hessen Memorial” of 1793. This Frankfurt memorial was sponsored by the Prussian king Friedrich Wilhelm II and designed by the architect Carl Gotthard Langhans. For the very first time, this memorial also recorded “ordinary soldiers” names. It was put up on the very place where they fell, and for this reason is one of the first examples of war memorials that were increasingly erected throughout the 19th Century.

For the Prussian king, who with this had also fashioned a memorial to himself, it was the first victory against the French Revolutionary Army achieved through a coalition with another German army.