Of Beautiful Women and Beguiled Heroes: Stories on Crossbows

The Deutsches Historisches Museum’s collection of crossbows is one of the most important in the world. These valuable pieces and their related accoutrements are currently on view in the exhibition “The Crossbow: Terror and Beauty”. For the DHM blog, curator Dr. Brigitte Reineke recounts the stories that serve as artful ornamentation on the displayed weapons of hunting and war.

‘And it came to pass in an eveningtide, that David arose from off his bed, and walked upon the roof of the king’s house: and from the roof he saw a woman washing herself; and the woman was very beautiful to look upon.  And David sent and enquired after the woman. And one said, Is not this Bathsheba, the daughter of Eliam, the wife of Uriah the Hittite? And David sent messengers, and took her; and she came in unto him, and he lay with her’
(2 Samuel 11)

The mighty king beholds a vision of female beauty and succumbs to her seductive power. He subsequently engages in adultery, thereby committing a sin. This story from the Old Testament is depicted on two particularly ornately decorated crossbows from the Deutsches Historisches Museum’s collection. 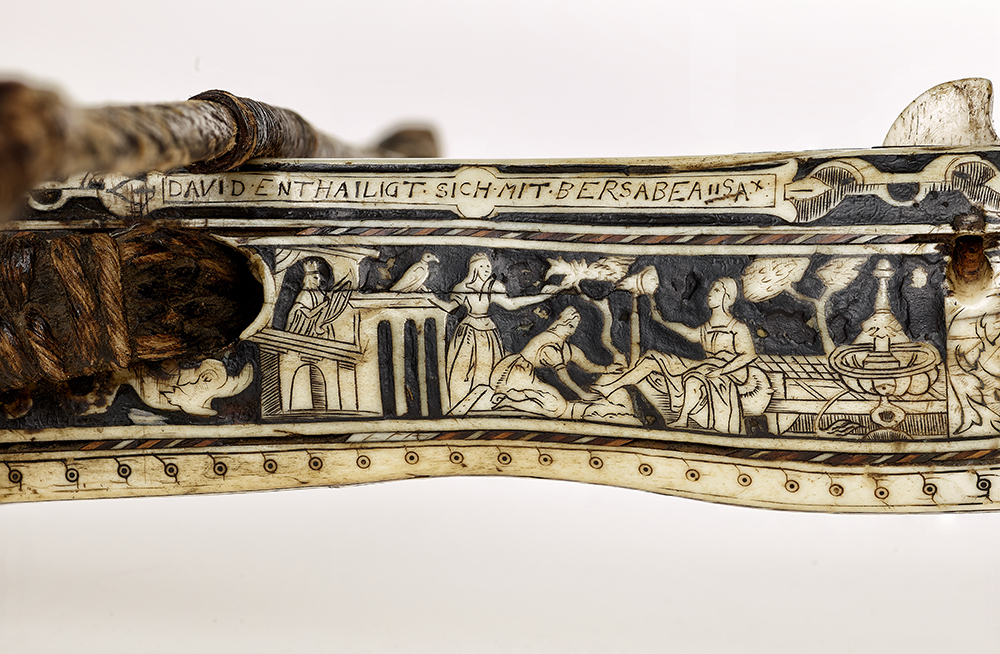 On the crossbow with relief decoration, dated 1576, an explanatory inscription complements the scene: ‘DAVID DEFILES HIMSELF WITH BERSABEA’. On the underside of the crossbow stock, it is flanked by another biblical protagonist, the Old Testament figure Judith presenting the severed head of the enemy commander Holofernes. Much like Bathsheba, she is also depicted as a nude beauty on the stock’s side. 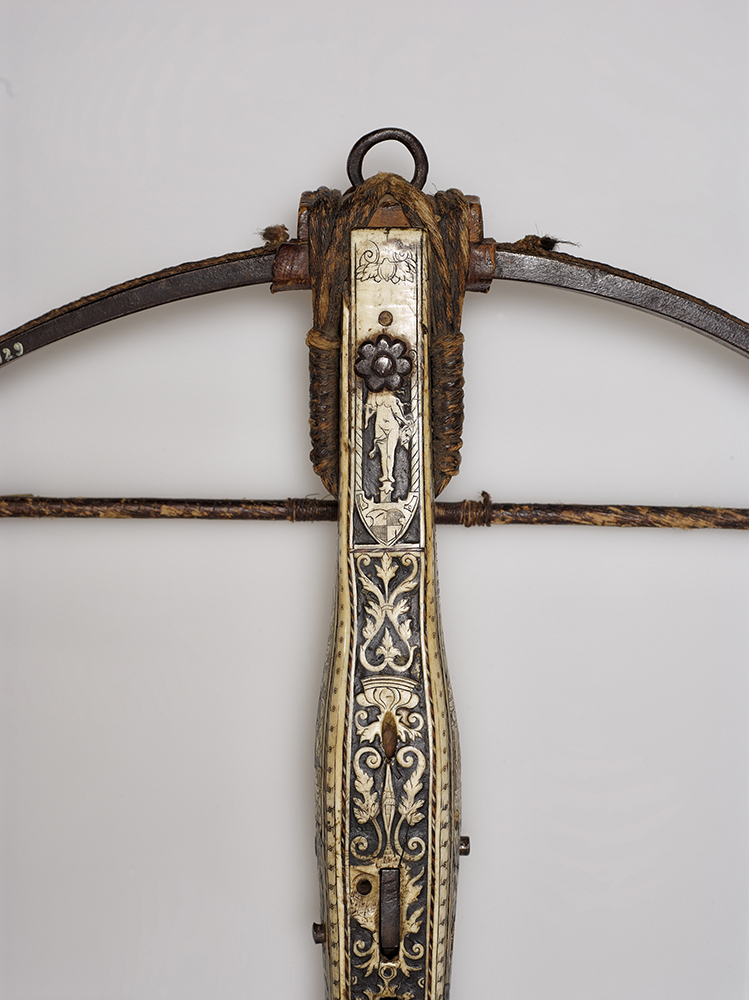 Depiction of Judith with the severed head of Holofernes, detail of crossbow (Halbe Rüstung) with relief decoration, southern Germany, 1564, inv. no. W 1129, © DHM

The second Bathsheba scene appears on a crossbow, striking for its unusual polychrome decoration in relief, dating from 1567. This particularly detailed scene depicts King David at the moment he first glimpses the bathing beauty that inflames his passion. The depiction of the nude woman bathing in the basin of water takes up the majority of the scene. 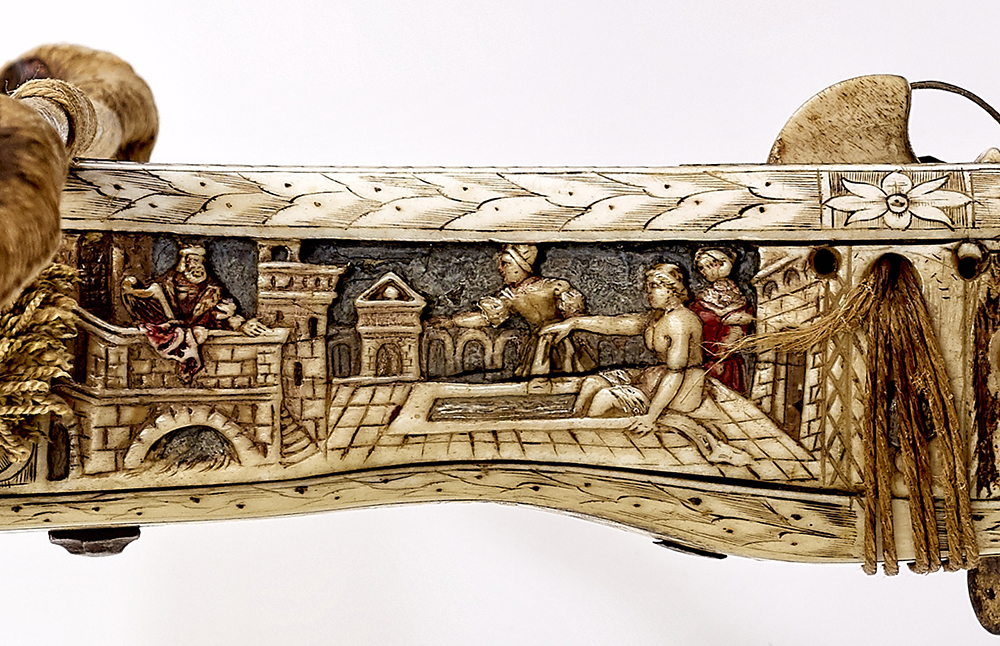 This is not the only erotic depiction on this crossbow, for it also features yet another man illicitly watching a naked woman. And he, too, will end in ruin as a result. The antique hero and famed hunter Actaeon observes the hunting goddess Diana with her companions while bathing, although he is strictly forbidden from doing so. Diana’s revenge is swift: she transforms him into a stag. Here, we can see Actaeon’s hunting dogs beginning to move towards him threateningly. They are about to tear their own master to pieces. This story, which adorns our hunting crossbow’s cheekpiece, comes from the ancient poet Ovid’s Metamorphoses. 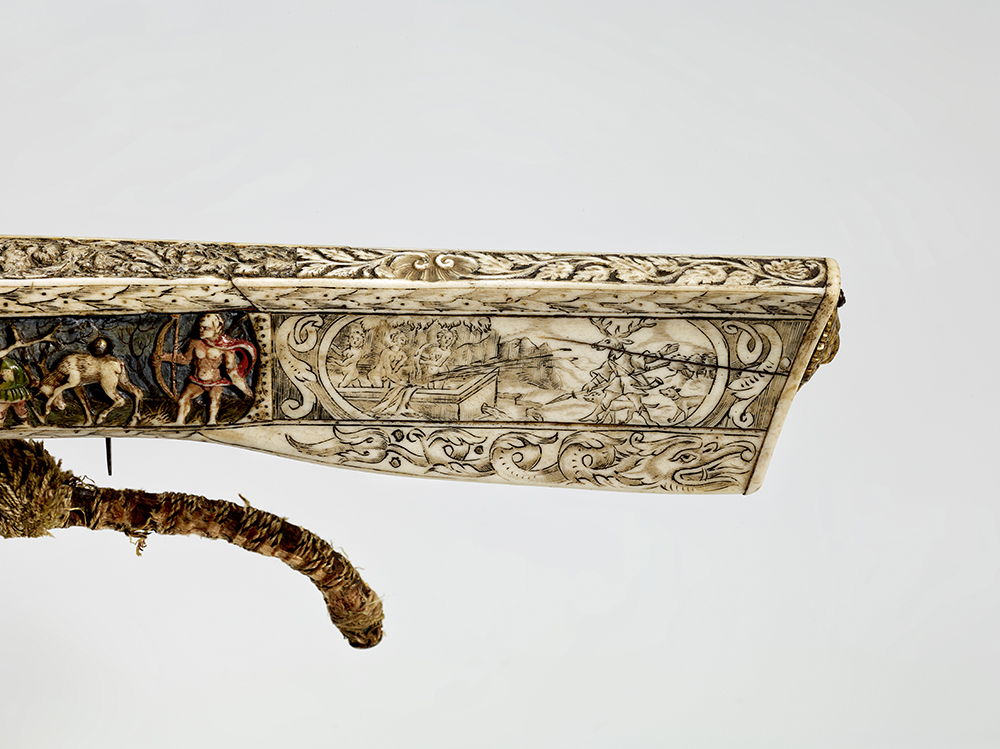 Like King David, Actaeon succumbs to the power of female seduction and is punished for his forbidden gaze at naked female beauty. Alongside the heroine Judith, already mentioned above, the ancient female figure Lucretia is often found on crossbow decorations. She, too, is usually depicted in the nude as she chooses to commit self-slaughter by stabbing herself with a knife, after feeling robbed of her honour after being raped.

All these stories centre around a female body which drives men to their ruin. The appearance of these stories and their heroines on these crossbows is by no means a rare occurrence. They also feature on comparable weapons from the same period. This phenomenon can also be seen in the exhibition: three early-modern edged weapons, selected for display, are decorated with depictions of the heroine Judith. When we recall the story’s details, this choice of subject becomes obvious. The Book of Judith recounts how the people of Bethulia are besieged and starved by Holofernes and his army. Judith goes to Holofernes’ camp under the pretext of defecting to the enemy, and he is enraptured by the beautiful woman’s visit. At a banquet, he becomes so drunk that he sinks into his bed unconscious. Judith seizes the opportunity, as well as Holofernes’ sword, and beheads him. She returns to the city of Bethulia with the commander’s head. The head is publicly displayed on the ramparts, horrifying the now-leaderless enemy soldiers to such an extent that they break off the siege. Bethulia is saved thanks to Judith’s courageous efforts. 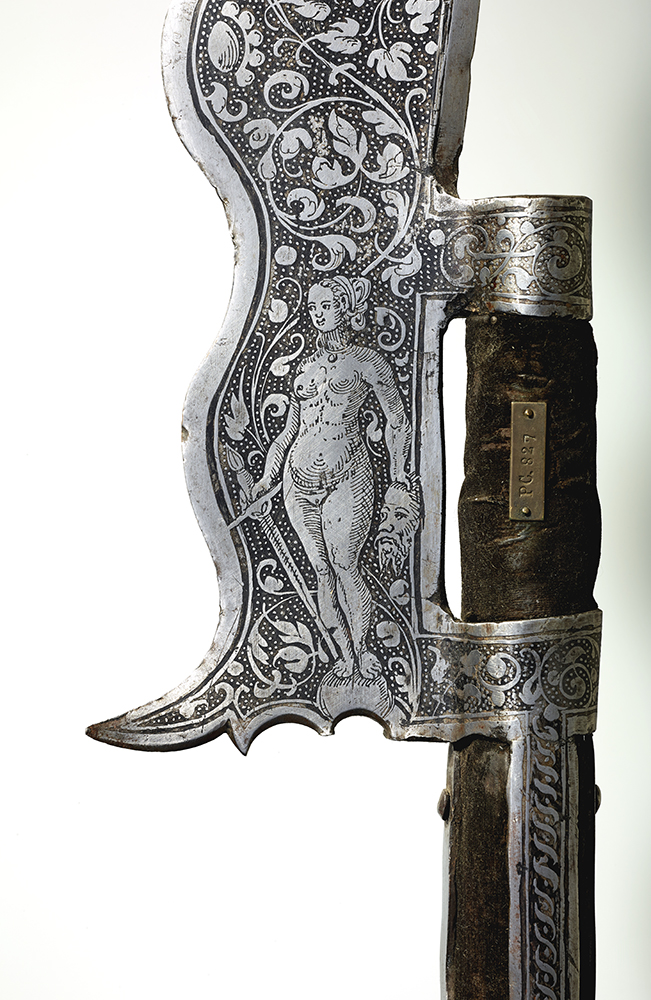 In early modern retellings of this story, however, praise for the heroine’s courage is mixed with a decidedly critical undertone. What these accounts share is the insinuation that Judith is cunning and treacherous, coupled with an underlying sympathy for the decapitated commander, who essentially loses his head twice – once metaphorically and once in an act of murder – by succumbing to the power of female seduction and trusting the wily heroine. The heroines Diana, Lucretia, and Bathsheba were likewise accused of cunning and deceit, to which men fell victim.

Particularly in the literature of the 15th and 16th century, this developed into the recurrent theme of Weiberlisten (women’s wile), which grew out of the topos of Weibermacht (power of women). It was something which obviously frightened men or, at least, a monstrous enough contemplation to send a pleasant shiver down their spine. No wonder that these stories of clever, murderous, or simply seductive women have found a fitting place on both hunting crossbows and weapons of war!