On Philistines and Eagle Bashers

Towards a History of Crossbow Shooting

In the Middle Ages cities had to defend themselves. The crossbow was a suitable weapon for this, but it required practice. Soon the practice hours turned into shooting contests, which led to shooting festivals and the institution of the shooting club or society, as Dr Sven Lüken, curator of the exhibition “The Crossbow. Terror and Beauty” and head of the militaria collection, explains.

The cities of the Middle Ages and the Early Modern Age enjoyed special freedoms and privileges. They were not democratic freedoms in the current sense, but regulations that gave them far more advantages compared with the people in the surrounding rural areas. Their existence was based on a closer communal life and greater independence in determining their crafts and trade work. Those who trade in goods need legal security. Those who live closer together need more rules than others and have to see that they are observed. In any case, they were freedoms that the peasants in the villages did not enjoy. This resulted in special municipal laws which usually applied to both women and men. The medieval citizen of a town is the predecessor of the modern citizen of the state.

The citizen as defender of his city

The people who enjoyed freedoms had to be ready to defend them. Since there was no governing order of the state that could be called upon for support, they had to rely on self-help. Compared with current conditions, a culture of violence prevailed in the Middle Ages. Like every culture, it was structured, but in our eyes it appears to have been chaotic. Even when the emperor or a prince was the official ruler of a city, they were usually far away and concerned with their own interests. Every citizen was therefore obliged to defend the town. Rich merchants in the municipal council could afford to keep horses in case of equestrian battles. The cannons were stored in the city’s building yard or arsenal. The ordinary citizens fought on foot with simple pole weapons, in German “Stangenwaffen” or “Spießwaffen”, which led them to be called “Spießbürger”, a term that came to mean “philistine” or “narrow-minded bourgeois”. And a small, not impecunious class of citizens started to utilise a new weapon that was first used in the 12th century to keep the enemy at bay: the crossbow. It was a weapon that had been forgotten since it was first developed by the Romans. It was more reliable than the bow and arrow and above all had greater penetration power. However, it required more skill, technical finesse and knowledge to produce it and involved in toto higher manufacturing costs. It was not more expensive than a sword forged of Damascus steel, but cost less than a simple wooden bow due to its mechanism and load-bearing parts. 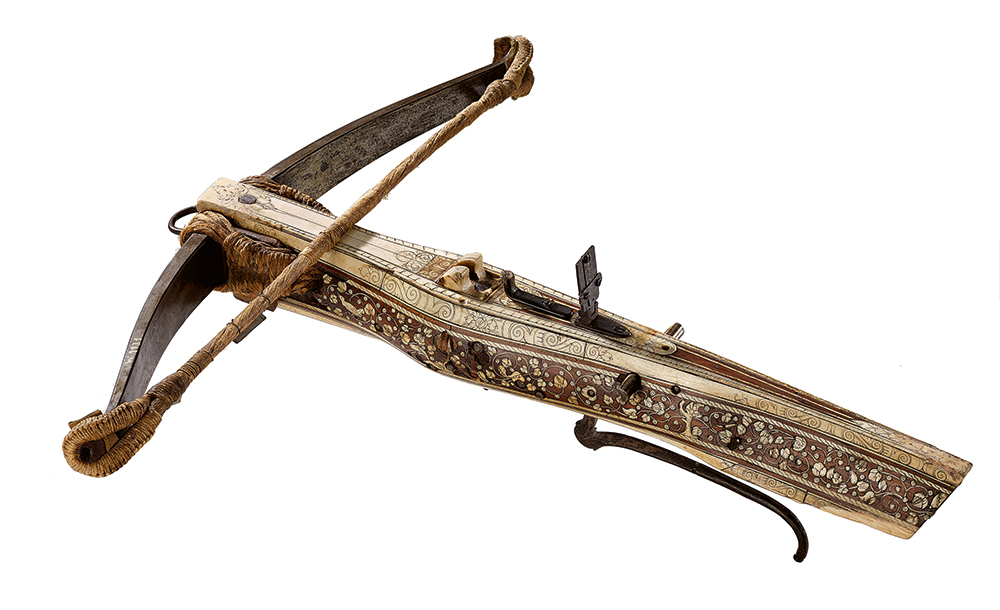 Almost anyone could shoot a crossbow made by a specialist. With a certain degree of practice a craftsman, a merchant, a citizen could become a good shot and could battle an enemy besieger from his own city wall or attack an enemy city wall with the crossbow’s bolts. From the 12th century on, crossbowmen therefore fought not only in the princely or imperial armies, but also in the municipal forces.

From training together to the shooting festival

Even a single crossbowman can be of military significance, but several of them, who can give each other cover, are more effective. With the support of the municipal councils, shooting societies were already being founded in the High Middle Ages, the early 12th century. They were almost always closely associated with the Church and they usually selected a patron saint, St. Sebastian, for example, who had suffered his martyrdom by being shot with arrows. The shooting societies at the time, unlike modern shooting clubs, were anchored in the municipal statutes and were a visible part of the striving for independence and self-determined order of the cities. The shooters represented the towns in which they lived and worked.

The period from the 15th century until the beginning of the Thirty Years’ War was the principal time of the shooting societies and their shooting festivals. Epochal historic events such as the Reformation did nothing to change that. Alone in the cities of southern and central Germany more than a thousand festivals are known to have taken place during that time; after the war had been concluded in the Westphalian Peace of 1648, a limited number of festivals began to reappear. 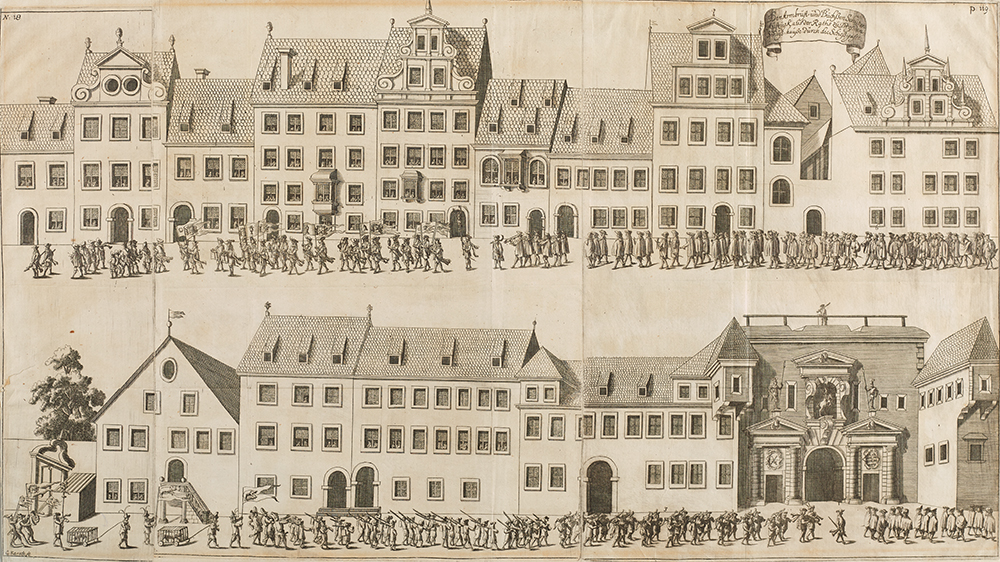 Shooting festivals did not take place annually, but rather were announced from time to time. Since at first they were purely municipal festivals, they utilised the municipal networks in the empire to extend the invitations and recruit the participants.

First a printed invitation, a so-called “Ladschreiben”, was officially sent out, which set out the conditions of the competition, the shooting range and the prizes that were to be awarded. The composition of the jury and the role of the shooting range personnel were also mentioned. One could almost imagine that such notions as fairness, athletic competition and equal opportunities existed at that time. Usually other forms of entertainment such as races and especially lotteries were put on in order to promote a visit to the shooting match – and to finance it. The event began with a march of the participants out to the festival grounds with its provisional buildings and tents on the outskirts of town. The extensive heats of the shooting itself required time, during which the people amused themselves and scuffled, but also talked shop about weapons, went about their business or arranged marriages, and “dabbled in politics”. After some ten days, it was all over. The events were precisely documented; records were sometimes broken; there were heroes and flops. A shooting festival was a highlight in the course of the municipal year which was also dotted with religious festivals. In this way the cities in the Holy Roman Empire could create a secular public presence – and utilise it.

In the time around 1500, the aspiring princes in the Empire recognised the potential offered by the shooting festivals. With a bit of restructuring they could also give the prince of an early modern territorial state a stage on which he could present himself. At the beginning the princes let the experienced municipal officials organise the festivals, but later they increasingly put their own personnel in charge of running the events. In this way the festivals became more illustrious, but lost part of their original character and basis in equality.

Numerous personnel tried to keep order at the shooting range. The so-called “Pritschenmeister”, a kind of master of ceremonies in a harlequin costume, punished infringements, disciplined troublemakers with his “Pritsche”, or paddle, and kept the audience in good spirits with ribald banter. In the end, all the results were recorded in the form of a rhymed poem. The so-called “Zieler”, who stood near the target, determined when, by whom and how often the target had been hit, while scribes fastidiously wrote down the results and other personnel collected the bolts that had been shot. If the results were contested, a distinguished arbitral body, vested with great authority, would be set in motion.

By the end of the 15th century the crossbow had largely been replaced by firearms in military conflicts, and from then on, firearms were also permitted at shooting ranges. But yet the crossbow continued to be used in shooting contests, even today. For a long time it was considered the more distinguished variant among the shooting weapons. At the shooting range the marksmen shot bolts or bullets at a small, round target, some 80 paces away. The idea was to “hit the bull’s-eye”, to “hit the nail on the head”, still a challenge in our time. Or they shot at a wooden eagle placed on a high pole in a meadow in an effort to bash it. The winner was the one who shot down the last remaining piece of the bird, to the general merriment of all present. The prize money was so high in some cities that there were professional shooters who lived off the awards. 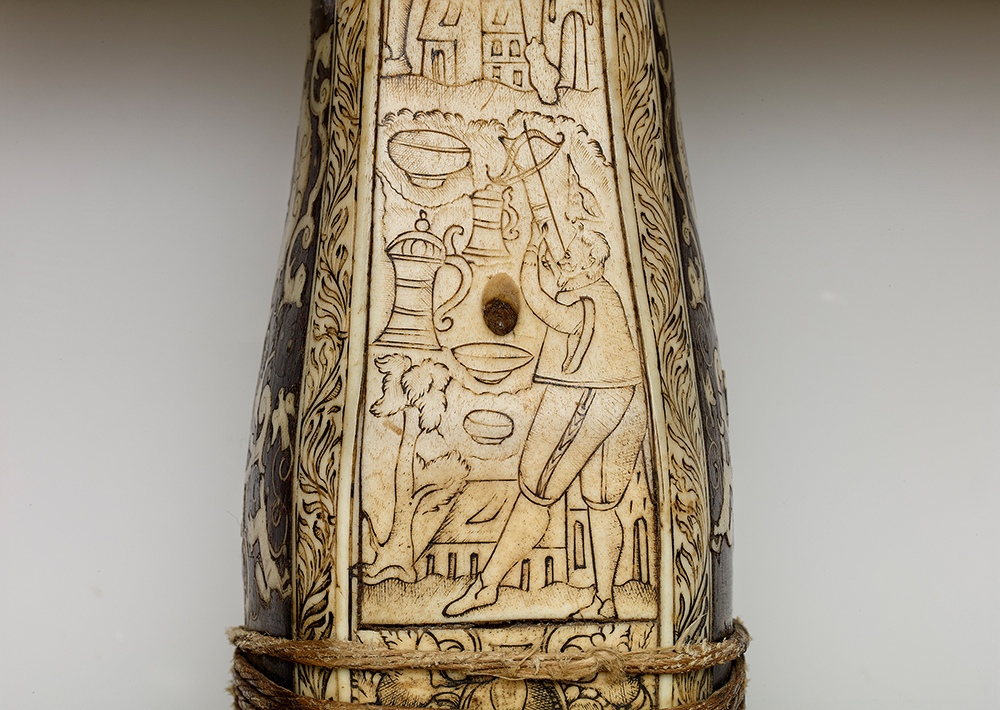 This reminds us of sports today, but the notion of recreation and leisure time now associated with sports had not yet been invented. It was a competition with weapons, far from war, but in the service of the representation of the city or the princes.

In the 18th century the enthusiasm for crossbow shooting died down. The shooting festivals never recovered from the demise of the Holy Roman Empire in 1806. Social conditions changed, the cities lost their freedoms, and in the wake of the French Revolution of 1789 relations between the citizens and the princes took a different turn. After the wars of independence in the 19th century, the shooting societies were revived, but now under the conditions of bourgeois clubs and associations. This was different from the self-representation of the cities and princes in the previous century: earnestness had turned into fun.