What is curiosity, actually? Does it still exist today, with the flood of images available at our fingertips? What did curiosity feel like in the past? On the occasion of the exhibition “Craving for New Pictures”, art historian Dr. Wolfgang Ullrich examines the nature and history of curiosity.

Throughout much of history curiosity was considered a vice. Like every other form of desire, it threatens to overwhelm people and lead them to excess. A curious person is not content with his or her surroundings, which appear too paltry, too harmless, too well-known, too finite. Curiosity therefore always pushes us beyond the here and now. It is the desire to have access to other times and places, and to bring them within reach. In so striving, however, the curious person is no longer focused, but distracted; he or she is not present in his or her own surroundings, but is everywhere and nowhere. For precisely this reason curiosity was viewed in the past as a sinister force, or even the work of the Devil. The church father Saint Augustine condemned it most emphatically, ranking it as more dangerous than lust, which, he thought, is at least only attracted to what is beautiful. He described curiosity as an illness of the mind because it is drawn to everything and anything, even that which is most ugly and terrible, as long as it is new. According to Augustine it was this aspect that was exploited: fraud and magic tricks were always in great demand thanks to curiosity. In his eyes, this also meant that people lost the right relationship to God. Instead of practising prayer and contemplation, people were continually distracted, and above all demanded miracles from God.[1]

Augustine saw the eyes as the locus of curiosity. As the sense with the largest range, sight has a stronger tendency than the other senses to “roam” far afield, even as far as the horizon. Sight extends beyond a person’s body and immediate surroundings, and can also equally encompass foresight and hindsight, thus transcending the present. The new, however, also sometimes itself approaches the roving eye in the form of images. Images bring events that occur elsewhere directly to the curious, bridging spatial and temporal distances that the eye cannot otherwise traverse. Images are also not limited to showing something that actually exists, but they can be used to live out any fantasy and make it visible for others. This especially makes images “the” medium of curiosity, but also immediately places them under suspicion of sinfulness themselves.

The fact that curiosity usually remained unsatisfied only added to the perception of it as evil and sinful. The unsatisfied, curious gaze roved everywhere in the hope of finally discovering something new, indeed this led the curious to wander in their thoughts, fritter away their time, lose themselves, their minds always lurking where something “might” happen.

If something suddenly did happen, “curiosity [made] … every spectator five inches taller, and his eyes … half an inch wider”, as a letter on tolerance to the clergy of Upper Hesse written in 1774 so vividly describes.[2]

Unsatisfied curiosity not only meant excruciating boredom, it could also lead to impatience or depression, thus negatively affecting the affected individuals’ relationship to their surroundings. Images promised salvation from this plight, or at least a brief alleviation of the suffering caused by curiosity. Even after the invention of printmaking technology, however, images remained rare, making them a commodity for which people were happy to pay to satisfy their curiosity. Picture-sellers made their way from village to village, officially selling images of saints, and unofficially selling pornography. In the same way itinerant balladeers called “Bänkelsänger” (known in English as cantastoria or minstrel – “singers of stories”) also travelled throughout the countryside, captivating their audiences with spectacular images of catastrophes, misfortunes, and crimes, vividly described and accompanied by music. 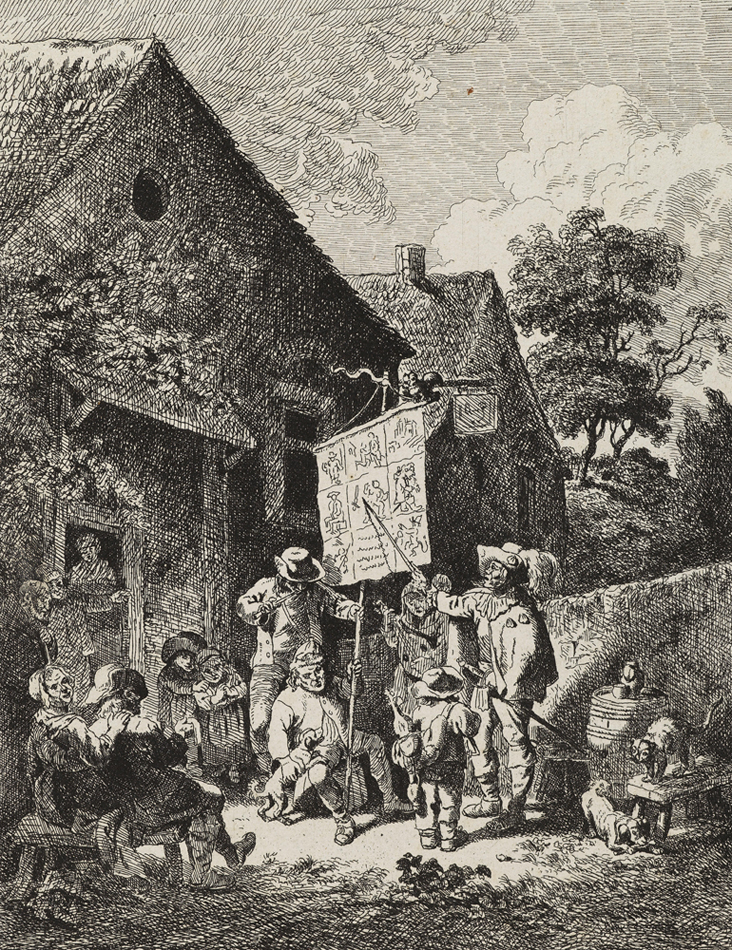 The exhibition “Craving for New Pictures” presents numerous depictions of such picture-sellers and singers. On the one hand these images consistently reveal the extent to which pictures were associated with the joy of being able to transcend the boundaries of one’s own narrow world. On the other hand they also show how closely the enjoyment of pictures was associated with a guilty conscience and a sense of erring from the right path. An etching by Friedrich Müller from around 1775 depicts a Bänkelsänger with two musicians in a small, poor village. The picture tableau in banner form, unrolled and supported by a stick, takes centre stage in the middle of the image. The light colour of the banner stands out against the dark background of dreary, unattractive houses, further emphasizing its role as the centre of attention, a beacon from a better world. Quite a few people have gathered in small groups around the banner, but they appear somewhat lost and rather passive. The audience includes children, an old hunchback, and a couple who appear to be drunk. These characters can hardly be said to represent fine society or paragons of virtue. Instead, the entire scene characterizes presenting and viewing pictures as a rather crude activity, targeting the basest of instincts. Cats and dogs also take part in the performance, a further indication that the show appeals only to base desires, not to the intellect.

A sermon from the same period by the French bishop Antoine Godeau reveals the equal emphasis with which preachers warned their listeners against both curiosity and images. A German translation was published in 1770 in Augsburg, where Müller’s print was also published. Godeau criticizes the lust of the eyes in general, identifying the eyes as “the windows through which the Devil invades your heart”, and particularly condemns the viewing of “indecent pictures”.

In the 18th century a direct path thus led from curiosity and pictures to eternal damnation. But times have changed since then. Today curiosity is usually seen as a positive trait, associated with alertness and a thirst for knowledge. This shift in perspective can not only be traced to the waning influence of religion and the Church, but also relates to the fact that today curiosity can be satisfied much more often than in the past. It is thus no longer experienced as a torment, and no longer has a destabilizing effect. This in turn results from a dramatic increase in the number of images available that would have been inconceivable in past eras. It is not, however, only the sheer number of images that has exploded thanks to various technical innovations, from photography to digitalization. What is perhaps more important is that nowadays images can be transmitted to any location at any time. Where small numbers of pictures were once carried by hand from one place to another, and probably awoke more yearnings than they could satisfy with the little that they depicted, today we can call up live images from anywhere in the world in seconds on our computer screens, as well as pictures from any genre or epoch we choose. Pictures by consequence only rarely enjoy commodity status. Instead of existing only in limited quantities, they can be reproduced as often as desired, and have become so prevalent that they will never again be a scarce commodity for which one would demand or pay a price. The feeling of unsatisfied curiosity has thus almost entirely disappeared, a state of affairs for which almost no parallels exist in the history of civilization. When else has a feeling perceived as a constant presence since time immemorial lost all the conditions of its existence so quickly and so completely?

The fact that abundance has replaced rarity, however, prompts a new generation of diagnosticians to raise a finger in warning. They speak with great concern of the “flood” of images, stimuli, or information. As readily as curiosity was once interpreted as an overreaction resulting from a scarcity, now critics just as readily impute feelings of powerlessness and overload as the result of an excess of the constantly new. Manfred Spitzer, for example, who as a psychologist and neuroscientist enjoys a level of authority comparable to that once granted a bishop or priest, asserts that people are suffering from “cyber-sickness”. Along with many others he laments that many people today, faced with the digital world and the abundance of screens and displays, “have the feeling that they can no longer keep up, and become resigned”. Just like the curious, overwhelmed individuals are described as people who have lost themselves, who have lost their centre, and feel uprooted.

“We lag behind, panting, and know at the same time that we have no chance.”[4]

Where before the fires of eternal damnation threatened, now the fear of “digital dementia” looms.[5]

The religious-moral discourse thus finds its successors in the culture-critical para-medical diagnoses of our time, and pictures are once again viewed with particular suspicion. This time critics most often warn against the photo-sharing platforms on social media, above all “Instagram”, with their ubiquitous selfies, food porn, and cat content, which supposedly once again only appeal to our basest instincts. The flood that threatens us is not just any flood, but a flood of trash and rubbish. If one of this picture-pessimists were to closely examine Friedrich Müller’s etching, he or she could even grant it a prophetic quality. Doesn’t the arrangement of the images on the banner in the etching, with its rectangular framed pictures aligned in rows of three, already look exactly like the presentation of images on an “Instagram” page?