Leaflets against Dictatorship – The ‘White Rose’ and 18 February 1943

He was only doing his duty, said Jakob Schmid, the former custodian of the Ludwig Maximilians University of Munich, when asked about his actions on 18 February 1943 before the military tribunal in Nuremberg. While walking through the university building on that Thursday morning he saw the two students Sophie Scholl and her brother Hans sending a shower of leaflets down into the atrium. It was the last leaflet of the resistance group known as the ‘White Rose’ (Weisse Rose). Thomas Jander, curator of the documents collection, describes how the Scholl siblings and their supporters used leaflets to rebel against dictatorship 75 years ago.

The ‘White Rose’ had numerous confidants and supporters. The inner circle initially and primarily consisted of the medical students Hans Scholl and Alexander Schmorell, who were united by their rejection of the National Socialist state and its policies. In a very short time, from 27 June to 12 July 1942, they authored four of the six leaflets written by the group. Hans Scholl took on the lion’s share of the work. He wrote the first and fourth leaflets alone, and wrote half of each of the second and third leaflets. He had purchased a mimeograph machine, which the group used to duplicate around 100 copies of each of the leaflets, after Schmorell had typed them onto stencils. These copies were mailed to members of the intellectual bourgeois upper class chosen from the Munich telephone book. The content of the rather elitist texts was chosen to appeal to a highly educated audience who would easily recognize the quotes from Schiller, Goethe and Aristotle, and would not be intimidated by the intellectual language. Public houses also received mailings from the ‘White Rose’ because the students hoped that publicans would disseminate their message. In essence Scholl and Schmorell called for passive resistance and sabotage, hoping to rouse an intellectual opposition to the ‘dictatorship of evil’. When the military company to which Scholl, Schmorell, and other members of the inner circle like Willi Graf belonged was sent to the Eastern Front in Russia on 23 July 1942, the group’s resistance activities temporarily came to an abrupt halt.

Radicalisation of the Resistance

The company was deployed for medical service, and the mission simultaneously served as a clinical traineeship. Their march took them through Warsaw, where they became eye witnesses to the criminal despotism to which the Jews in the ghetto were subjected. They experienced the atrocities of war, but also became acquainted with local Russians under occupation. These formative experiences led to a radicalisation of the resistance.
When the student company returned to Munich on 6 November 1942, the inner circle expanded to include Schmorell’s close friend Christoph Probst, Kurt Huber, a professor of philosophy at the Munich university, and finally also Sophie Scholl, who had previously been included in the group’s confidence, but had not taken active part in the resistance. The group’s fifth leaflet was written in late January 1943 with Huber’s collaboration. Unlike their previous leaflets, in this text the ‘White Rose’ no longer exhorted the intellectuals of Munich to passive resistance, but instead sent out ‘A Call to All Germans!’, urging them in clear, direct terms to break with National Socialism and overthrow the regime. Historians believe that over 5000 copies were produced this time. The distribution also took on new dimensions: along with the mailings, which now extended beyond the immediate region, leaflets were also hand-distributed throughout Munich by night.
This method was more wide-ranging and effective, but also much more dangerous. The following campaigns, in which Scholl, Schmorell, and Graf spent almost ten nights writing ‘Freedom’ and ‘Down with Hitler!’ on numerous building facades in Munich, were even more dangerous.

The sixth and last leaflet was written on 12 February 1943. This time the letter was addressed directly to the students at German universities: it begins ‘Fellow Students!’ The text that follows, referencing the crushing defeat at Stalingrad and the threatened annihilation of thousands upon thousands more young lives, calls for an open revolt in the lecture halls of German universities. Half of the 2000 to 3000 leaflets were again distributed by mail. The Scholl siblings carried the others to the university building on that fateful Thursday. Kurt Huber was holding a lecture, the hallways were empty, so they set out stacks of leaflets, and stuck them in the pockets of coats hanging along the walls. As if that were not already risky enough, they flung stacks of the compromising papers into the atrium from the gallery, where the siblings were finally seen by the custodian Schmid, who confronted and detained them. He alerted the Gestapo, and officers quickly appeared, arrested the Scholls, and brought them to the Munich headquarters. After numerous interrogations they soon confessed, and each assumed full responsibility. Shortly thereafter the other members of the group and their supporters were uncovered.
The investigation was completed on 22 February 1943, only a few days later. Hans and Sophie Scholl, along with Christoph Probst, were accused of high treason before the Volksgerichtshof, the Nazi ‘People’s Court’, and sentenced to death. The sentence was carried out that same day, at five in the evening at Stadelheim prison. Alexander Schmorell, arrested after a failed attempt to flee the country, was also executed on 13 July 1943, along with Kurt Huber. Willi Graf was murdered on 12 October 1943.

The question of how and why these two young and physically fit individuals would first undertake such a highly risky action, and then allow themselves to be arrested without resistance by an older man remains a matter of speculation to this day. We will never know whether it was conscious self-sacrifice, fatigue from working day and night for weeks and lack of sleep from the possible use of stimulants, or resignation to their fate in an overwhelming moment. In the end the reason is only of secondary importance. The historical significance of the White Rose’s resistance to the Nazi regime is undisputed today. They displayed courage when most other Germans had none, and spoke out about issues on which the majority of the population remained silent. 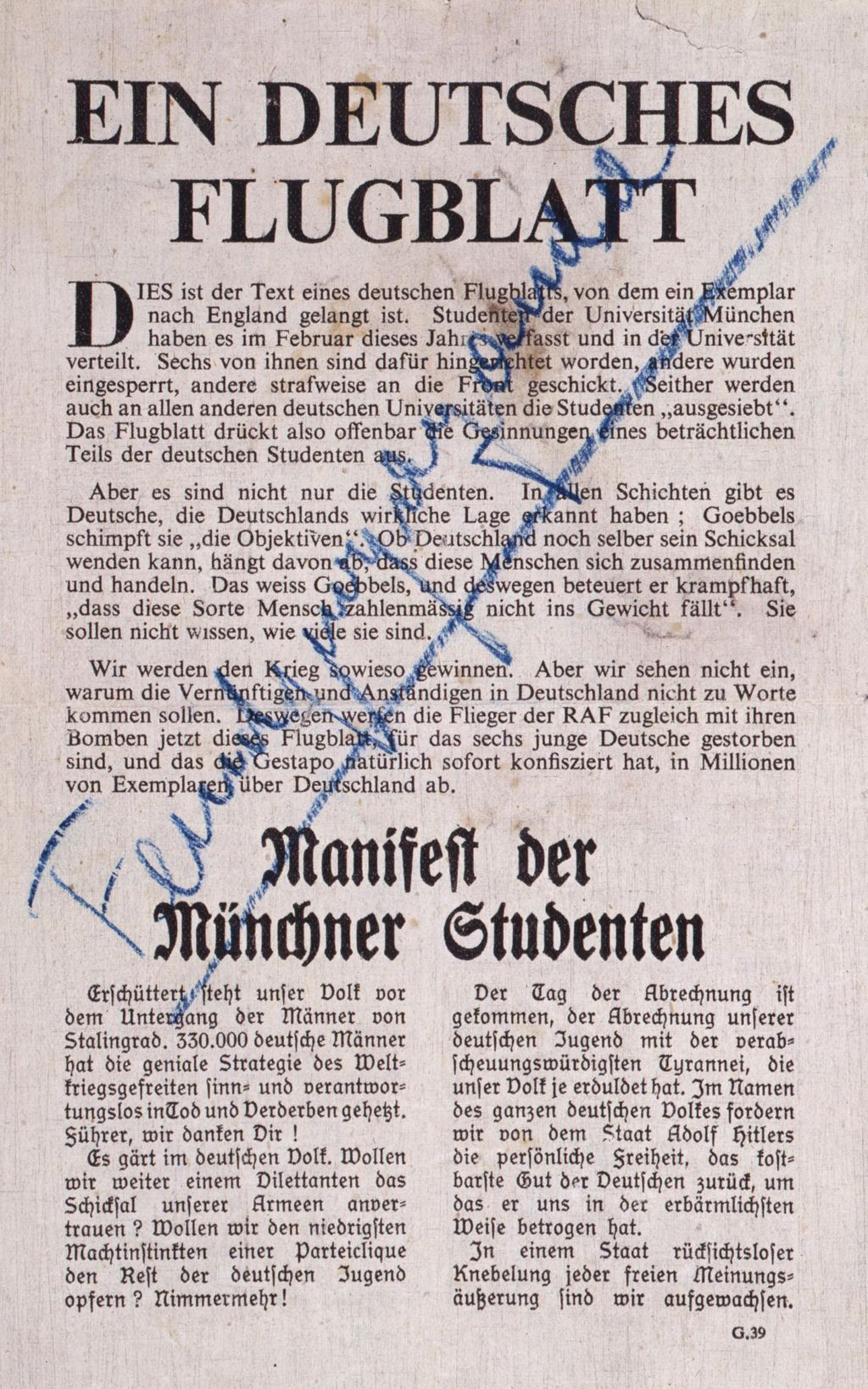 British Airborne Leaflet, including the excerpts from the sixth leaflet of the ‘White Rose’, Great Britain, 1943 © Deutsches Historisches Museum, Berlin

A last leaflet campaign publicizing the work of the Scholl siblings and their circle reached a massive audience: in July 1943 Royal Air Force bombers dropped a total of over 5 million leaflets over German cities including Cologne, Frankfurt, Hamburg and the cities of the Ruhr region. These bore the title: ‘A German Leaflet […] The Manifesto of the Students of Munich’.