The Dutch and Their ‘Oranje Feeling’

The Peace of Westphalia of 1648 marked the end not only of the Thirty Years’ War, but also of the Eighty Years’ War between the Netherlands and Spain. The latter began 450 years ago when William of Nassau (William of Orange) and others rose up in rebellion against the Spanish occupation. Throughout 2018 Holland’s National Military Museum (NMM) will commemorate this war, the historical figure of William of Nassau, and the foundation of the Netherlands. Art historian Hedwig Saam, until recently director of the NMM, recounts how ever-present Willem von Oranje is today in our neighbouring country, and simultaneously how nearly forgotten, both there and in the rest of Europe.

Anyone who visits the Netherlands on 27 April finds the entire country decked out in orange. On this day the birthday of the current king Willem-Alexander is celebrated. Whoever expects this celebration to involve official ceremonies and parades, however, will be disappointed. The Dutch certainly use the day to express their love of their monarchy, but they do so in their own particular way. Large street parties take over the city centres, music fills the air everywhere, people hold small jumble sales, and most importantly, everyone is dressed in orange from head to toe, or at least wears one piece of clothing in that colour. The colour orange, however, is not reserved solely for King’s Day. International athletic competitions also offer the Dutch an opportunity to indulge in this ecstasy of colour. Even on New Year’s Day, when thousands of brave souls clad in bathing suits take a traditional swim in the ice cold North Sea, they wear orange caps.

The Dutch and their ‘Oranje feeling’ – where did this come from?

2018 is the 450th anniversary of the year in which the Netherlands rose up in revolt against the Spanish occupation. The insurrection was led by a young prince from Dillenburg, William of Nassau. His rebellion against Spanish rule culminated in the Eighty Years’ War and ultimately led to independence for the Dutch state. Who was this man who even in his youth was so talented that he was considered Europe’s most charming knight? Every Dutch man and woman knows the first verse of the national anthem, which honours William of Orange and references the complicated conflict of the Eighty Years’ War, but hardly anyone understands the content of the text. Everyone also knows that the prince’s life ended in Delft when he was shot with a pistol, but what sort of man he was, or where his convictions came from, is not well known.

These questions and the upcoming anniversary of the Eighty Years’ War have prompted the National Military Museum of the Netherlands to dedicate the year 2018 to William of Orange. Preparations for the exhibition began in 2015, and the curators’ research led them far beyond their country’s borders. 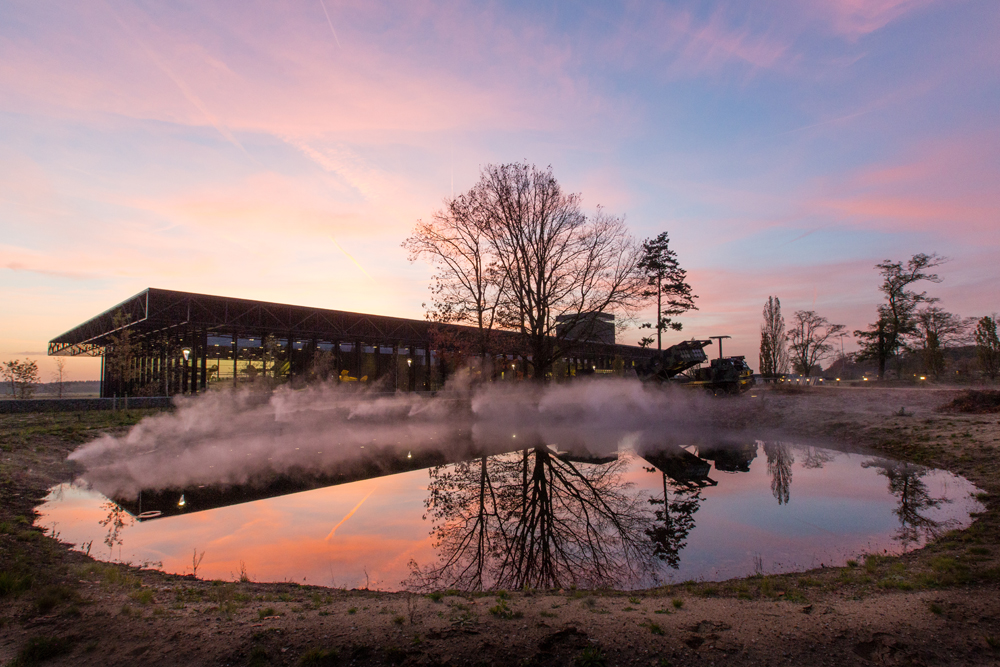 The National Military Museum of the Netherlands is a relatively new museum. It was opened by King Willem-Alexander in late 2014 and immediately became a major tourist attraction. This popularity was by no means predictable, as the Netherlands have a long tradition of pacifism. The Dutch army has played a purely defensive role for at least one hundred years, and many Dutch people, if asked, would also assert that they have ‘nothing to do’ with the army. At the same time, however, they also place great value on their freedom, an open and tolerant society, and their independence.

The Foundation of the Netherlands

Staging a historical exhibit addressing the outbreak and consequences of the Eighty Years’ War came naturally to a museum like the NMM. The collections house numerous objects from the 16th century, and the permanent exhibition also addresses this important period in the history of the Netherlands. William of Orange played a decisive role here. He led the uprising against Spanish rule, thus laying the cornerstone for the Dutch state in which our current norms, values, and concepts of freedom are founded.

The NMM’s fundamental principles – to edify, to act with integrity, and to be courageous, energetic and relevant – formed important guiding principles in developing the exhibition concept. Very early on the planning shifted from an initial idea of presenting the Eighty Years’ War and William of Orange’s involvement in a classic chronological manner to a closer focus on the captivating personal development of this iconic and yet in many ways unknown prince. In the end the historical events became merely the ‘ornaments’ of the story, rather than the central topic. 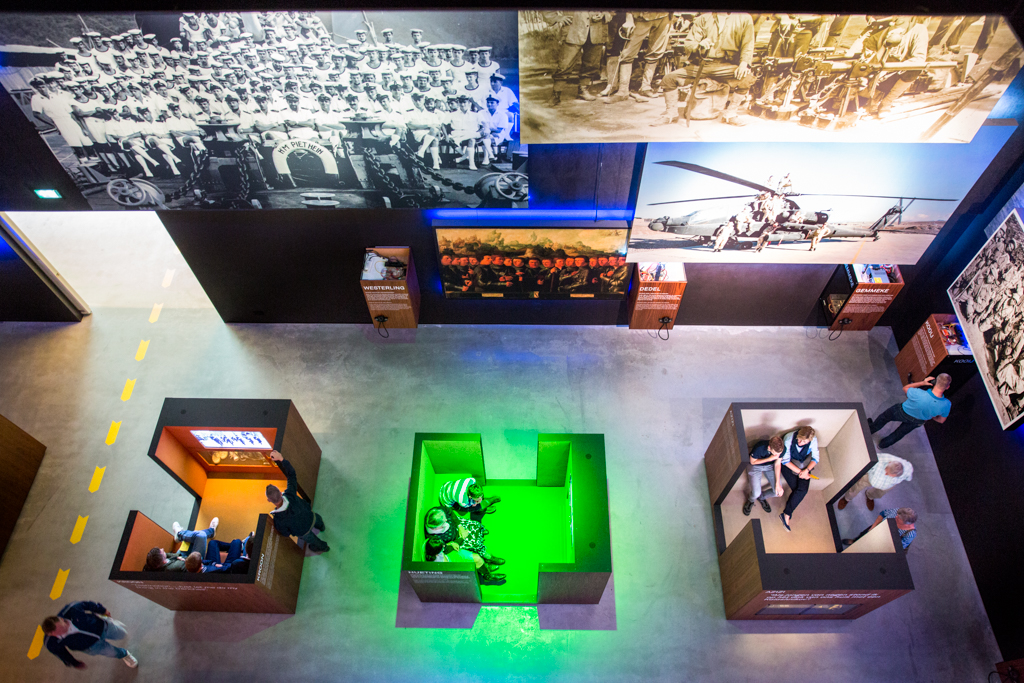 Inside the National Military Museum © NMM

The exhibition illuminates the life of the young, strong, and elegant prince William, who received an extensive military education at the Spanish court and had taken part in many military actions long before his rebellion against his former allies.

The design of the exhibition evokes the atmosphere of William of Orange’s time. Digital features offer visitors the opportunity to fully identify with the hero. Aside from the technical and creative challenges, however, the focus on William as a historical figure above all offers the opportunity to use fantastic historical objects and works of art to tell an authentic and personal story. The pieces in the exhibition become icons. The objects and the history are placed in recognizable relationship to the attitudes of our time. They are exceptional, intimately linked to William as an individual, and tell a very personal story.

The most spectacular example of this is probably the baton presented by William of Orange that one of our conservators discovered during the preparatory research for the exhibition. Despite its plainness – the baton is a simple staff of wood, 80 cm long – this is in many ways a unique relic. It is the only surviving Dutch commander’s baton from the era of the Eighty Years’ War, and it bears the coat of arms of William of Orange, who led the rebellion.

Furthermore, it has been verified that the baton was carried in the legendary and dramatic Battle of Mookerheyde in 1574 in which two of William’s brothers, Louis and Henry of Nassau-Dillenburg, met their deaths. Both brothers were commanders in the rebel army, and each bore a baton presented to him by William of Orange. Following the battle these batons fell into the hands of Luis de Requesens, who at that time was the Spanish governor of the Netherlands (as successor to the Duke of Alva), and finally made their way into the Jesuit archives.

A wonderful coincidence occurred in the course of the NMM’s research. At the beginning of the year it became apparent that the Dutch ambassador to the Holy See, Prince Jaime Bourbon De Parme, a cousin of King Willem-Alexander, was also searching for the baton. Our researchers immediately joined forces with his. When King Willem-Alexander visited the Vatican on 22 June, the baton was presented to him by the Superiors General of the Jesuit Order in the Vatican library. The baton thus took on a new symbolic function as a testament to the reconciliation between Spain and the Netherlands and the Protestant and Catholic confessions. This incident brought the NMM a great deal of attention in the media, a nice prelude to the opening of the exhibition. 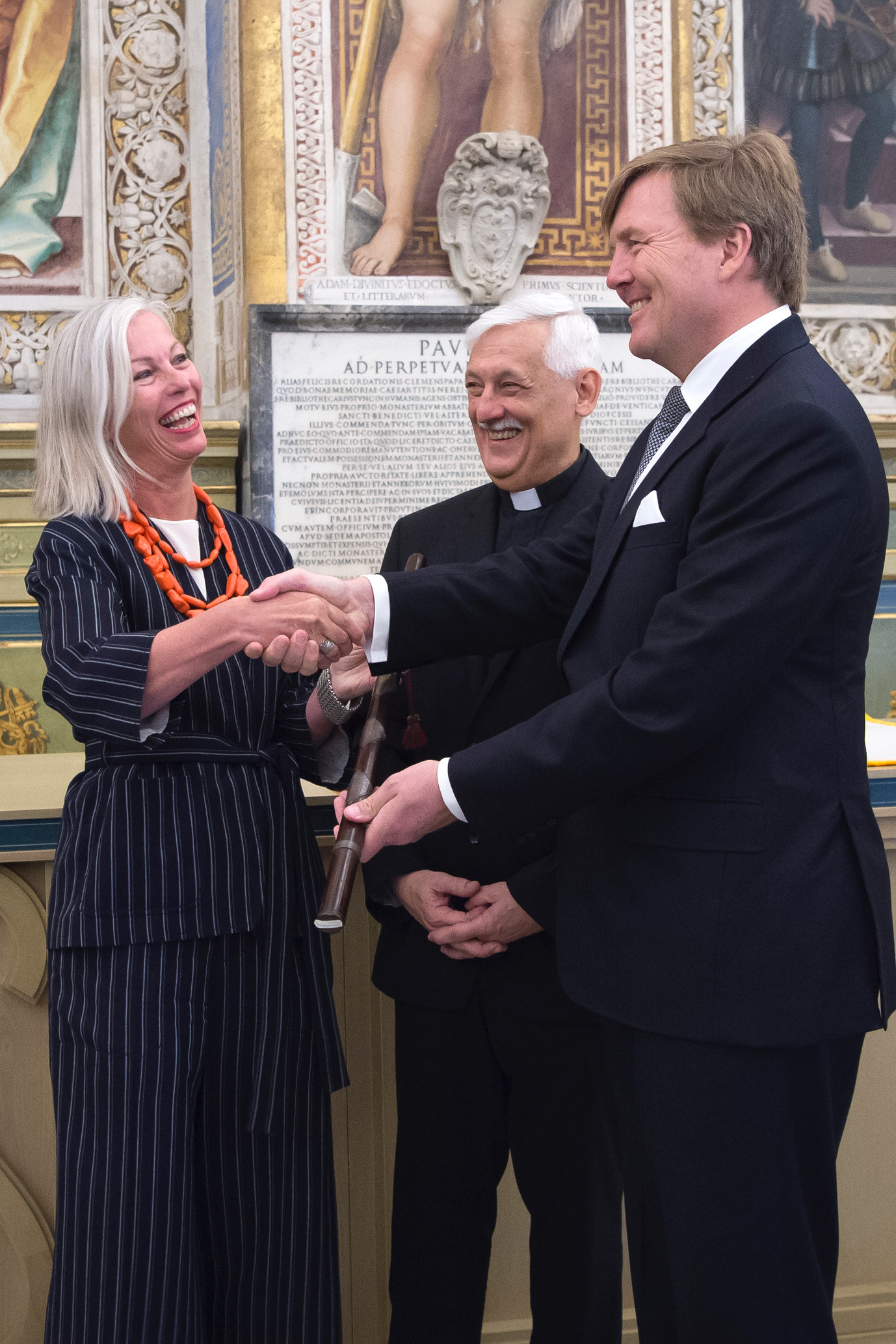