Every year, 3 June celebrates the greenest and healthiest form of transport: the bicycle. Sabine Witt, head of the DHM’s “Everyday Life” division, thinks the day marks the perfect opportunity to present a special bike from her collection on our “What’s That For?” blog section.

Two years ago, a bicycle joined the Deutsches Historisches Museum’s collection. Not a sleek racing bike, nor one of those Pedelecs equipped with auxiliary motors that are so popular right now. No, a perfectly normal, classic man’s bicycle. It has back-pedal brakes (but no gears), front and rear lights, a good-quality leather seat with suspension, a cargo rack with basket – and visible signs of wear, rust, and repairs. The pushbike of some run-of-the-mill cyclist, then? Hardly: this bike belonged to the political activist Fritz Teufel (1943–2010). He moved from his home in Swabia to study in Berlin in the 1960s. However, academic life quickly became secondary to his activities in the student movement and, alongside Rudi Dutschke (one of the most prominent figures in the 1968 student uprising), the Socialist German Student League. A gentle and affectionate character, Teufel co-founded “Kommune 1” in early 1967 with other well-known figures from the era, including Dieter Kunzelmann (who died in May this year) and Rainer Langhans. Their provocative campaigns gained public notoriety, although the long-haired “bogey of the bourgeoisie” was more a self-styled “fun guerrilla” – as, perhaps, befits the mischievous associations of his name (Teufel is the German word for devil) . He planned to use pudding and flour bombs in an “assassination” of US Vice President Humphrey, and in 1982 sprayed German Federal Finance Minister Matthöfe with magic ink.

The major demonstration held on 2 June 1967 to protest against the Iranian Shah’s state visit to West Berlin signalled a turning point in Teufel’s activism. While the policeman – and, as it later transpired, Stasi agent – Karl-Heinz Kurras, who shot dead the student Benno Ohnesorg on the periphery of the demonstration, was subsequently acquitted, the “communard” Teufel spent nearly six months in prison for allegedly throwing a rock. The reply he gave to the judge on being instructed to stand up before the court – “If it helps establish the truth” – has been popularly quoted ever since. Fritz Teufel became more radical in the following years as a member of a terrorist group known as the “2 June Movement”. He was also close to the militant far-left Red Army Faction, and by 1980 had served several years in prison.

After his release, the veteran anarchist discovered his new passion: cycling. Teufel not only considered cycling to be an enjoyable and profoundly humane form of transport – for a time, it was also his means to earning a living. For in 1992, Teufel founded the bike courier service Moskito and took on many of the jobs for himself. Even then, working as a cycle courier could be pretty dangerous in a city like Berlin, and far from financially lucrative. However, what mattered for Teufel was the fun involved. In an interview shortly before his death in July 2010, Teufel talked about the twists and turns of his life – including those on two wheels. He spoke passionately of the effortlessness of travelling from A to B courtesy of an ingenious idea by Leonardo da Vinci. 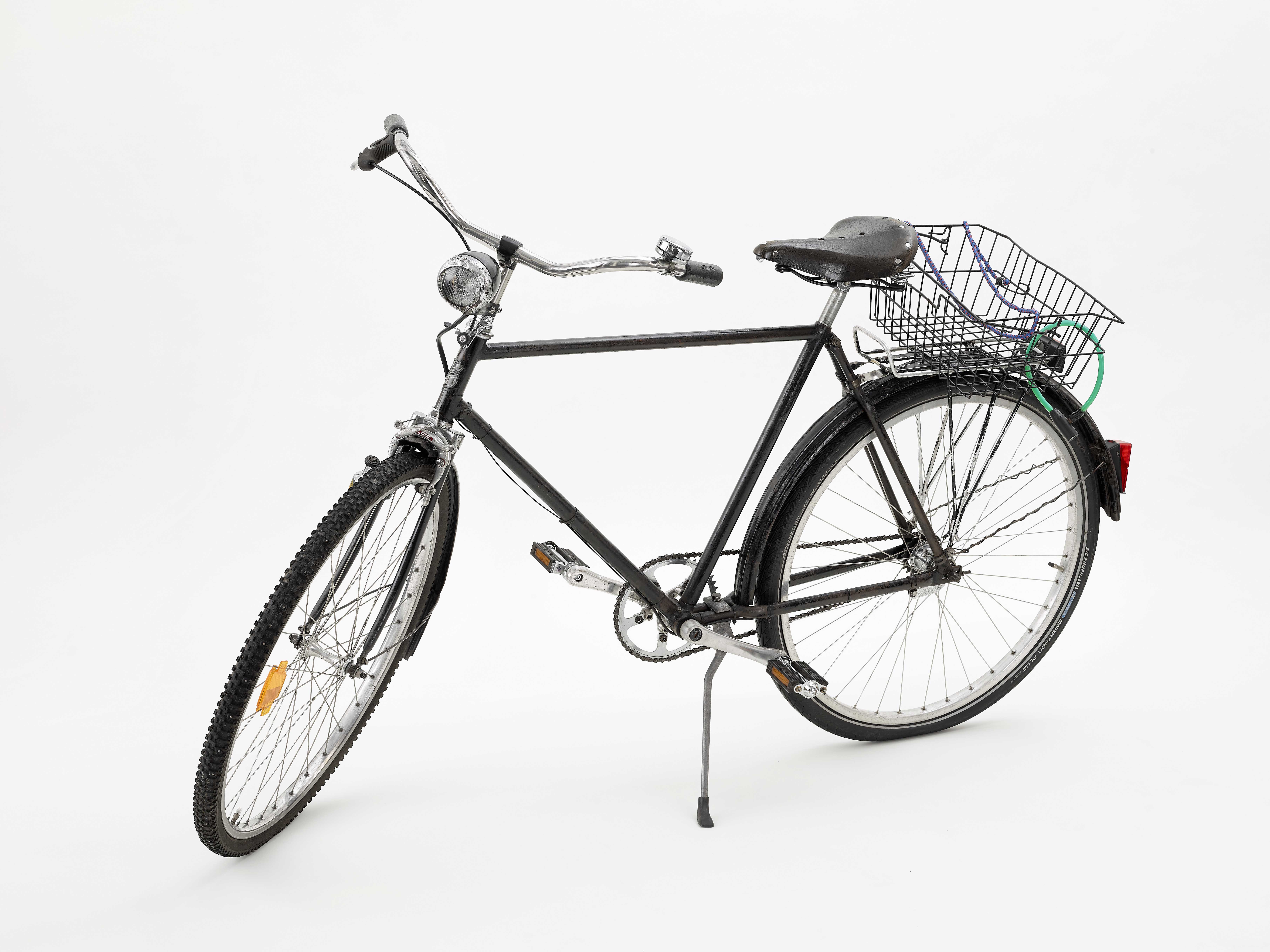 Admittedly, the bicycle held at the museum today is not the one Fritz used as a courier. However, it does seem to be the one he rode on a cycling tour of Sweden and Finland in the early-1980s, as attested by a rather blurred photo from the period. It was likely manufactured some years (even decades) earlier by Baronia, a traditional company that from 1921 to 1973 produced bikes in the (West) German towns of Bielefeld, Einbeck, and Rahden. The rather faded sticker adorning the frame with the slogan “Atomkraft – nein danke” (“Nuclear energy – no thanks”) is another reminder of turbulent times.

Since 1998, 3 June has been designated European Day of the Bicycle, which celebrates the greenest and healthiest form of transport. According to estimates by the Federal Ministry of Transport, some 7.5 million tons of CO2 could be saved every year in Germany if 30 percent of all short journeys less than 6 kilometres were made by bike rather than car. About half of all urban car journeys fall into this category. Fritz Teufel’s bike won’t be coming out of retirement to mark the occasion, so we’ll instead take the opportunity to wish “happy cycling” to everyone – and not just for 3 June!