The situation for German-speaking Jews worsened 1938. After Germany’s annexation of Austria in March 1938 violence and public discrimination increased. In June 1938the Nazis started the so called “Juni Aktion” and “Aktion Arbeitsscheu”. Dr. Frank Mecklenburg, Director of Research and Chief Archivist, Leo Baeck Institute New York|Berlin, describes how Vienna after the “Anschluss” functioned as a laboratory for the implementation of new levels of brutality and violence later applied throughout all of Nazi territory.

The Nazis implemented a new wave of violence in June of 1938 that affected Jews as well as non-Jews. As the New York based Jewish Telegraphic Agency (JTA) reported:

“BERLIN (Jun. 17), A terror-stricken Berlin Jewry today awaited new developments after street riots and mass arrests by police, while restrictive measures mounted to harass Jews in business. Dozens of Jewish shops remained closed today and Jewish cafes were empty as the capital’s ‘non-Aryans’ attempted to safeguard themselves against expected repetition of last night’s raids, arrests and street disorders which climaxed what was termed the worst 24 hours experienced by Berlin Jewry since the early days of the Nazi regime.”

Vienna as a testing ground of an anti-Jewish policy

Beginning immediately with the “Anchluss” on March 12, Viennese Jews had already been confronted with this new level of extreme measures, with Vienna functioning as a testing ground for Nazi policies against Jews. Only a few days later in March, Adolf Eichmann arrived in Vienna. However, with the “Juni Aktion” attention shifted back to Jews in Germany. The “Aktion Arbeitsscheu”, planned in early 1938 and initially set into motion in April to arrest people who were labeled as “work-shy” by the Nazi Regime (and could include nearly everyone who was deemed socially undesirable), received a distinctive anti-Semitic turn in June, resulting in the arrest of 2,300 Jews in beginning of June in Berlin and other cities. Erich Seligmann, head of the Jewish Hospital Berlin after having been dismissed from his previous position as the director of the scientific institutes of the Central Health Office (Hauptgesundheitsamt) was one of many witnesses of these events. On June 15 he wrote about the current situation in his diary and his concise account provides a glimpse of how Jews encountered this new and terrifying development:

“Deepest depression hovering over Berlin’s Jewry. Raids in restaurants and on the streets. Hundreds of arrests, forced emigrations, methods that were field-tested in Vienna being transplanted to Berlin; many dreadful things that cannot be verified.”¹ 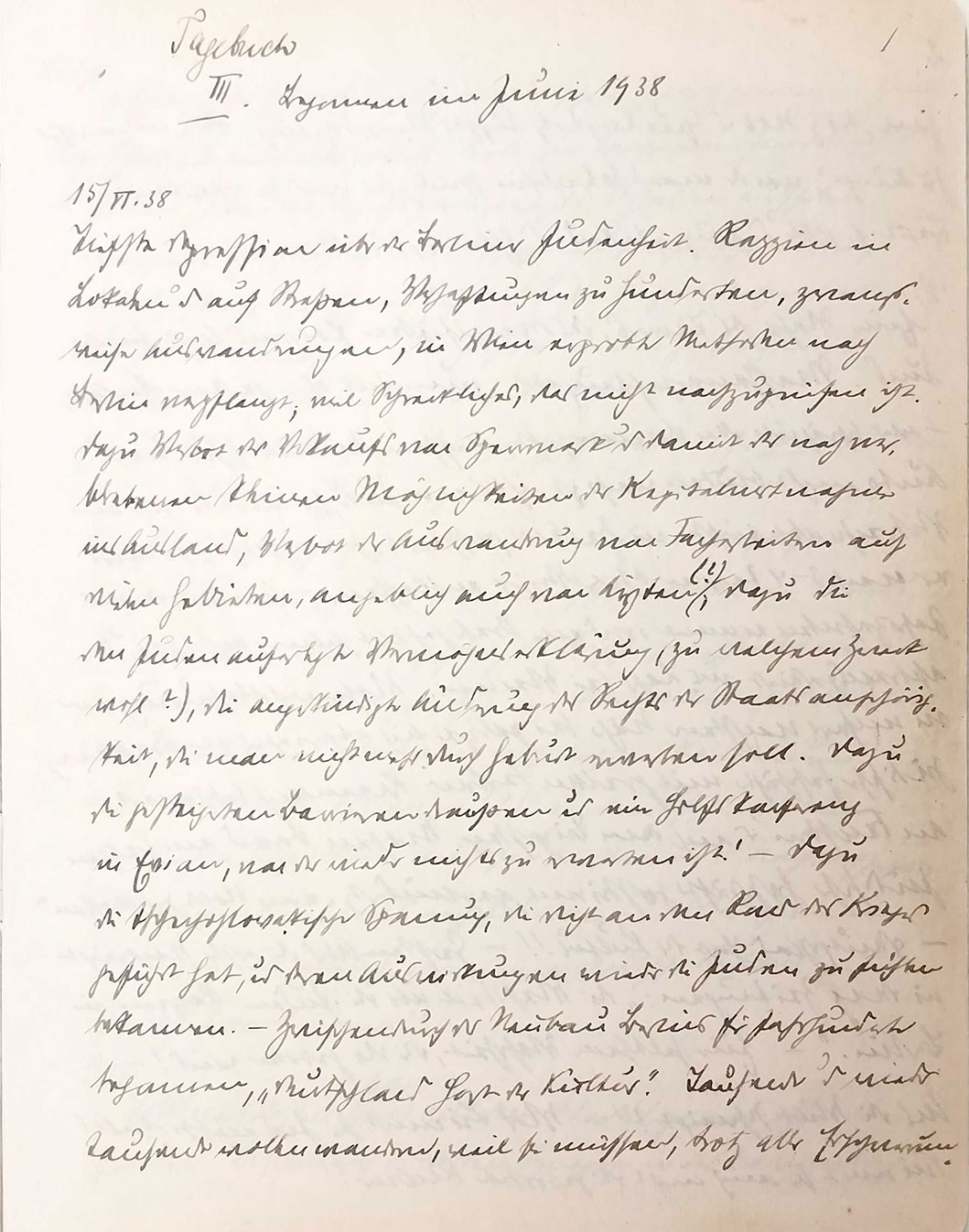 With each passing month more Jews tried to flee from Germany and Austria in the hopes of finding a safe haven. For those who remained the means of gathering reliable information were getting scarcer, all the more independent/international news agencies like the JTA became vital sources of information. In the beginning of June, JTA reported:

“VIENNA (Jun. 3), Scores of Jewish women inquiring at the Rossau-Erlaende prison and the central police station about the fate of arrested relatives were informed today that those who had been sent to the Dachau concentration camp in Germany during the past week would be put to work enlarging the camp.”

Forced Labor, “Zwangsarbeit”, was yet another measure of repression, however, the main goal was to get Jews out of German territory/territories, and the intimidation and violation of individuals and the community at large were implemented toward that objective. To add to the humiliation, it is also significant that Nazi measures against Jews happened on particular dates which coincide with Jewish holidays: June 6 was the Jewish holiday of Shavuot, celebrating the giving of the Torah to the Jews on Mt. Sinai; “Anschluss” took place on March 12, on a Saturday, the Jewish holy day of Shabbat.

It is hard to separate the specific arrests of the first few days of June from the chaos that began with the Anschluss in March when it became clear to the Nazis that much more radical and violent measures could be successfully implemented. The mass arrests and subsequent mass suicides following March 12 in Vienna did not subside when one looks at the daily reporting of the Jewish news media, JTA. While the desire for a chronology in writing history attempts to pinpoint important dates such as this one, the broader context shows a much more complex and dynamic picture. Instead of an event oriented narrative, the situation of Jews in Germany, and subsequently Austria, points to a more interwoven scenario of “Altreich” and “Ostmark”, and how Vienna after the “Anschluss” functioned as a laboratory for the implementation of new levels of brutality and violence later applied throughout all of Nazi territory.