Why Are School Lessons in Germany 45 Minutes Long?

On Monday, school resumes in Berlin and Brandenburg. German, Maths, English, Science – all these subjects are usually divided up into lessons of 45 minutes. Our author, Robert Kluth, explains where this timing originated and reveals that it has always been contentious.

Still 37 minutes to go! … Aww man! … How boring! … Now what time is it? … What!? The clock must be broken! Or the minute hand is stuck: it hasn’t moved since when I last looked! … There’s the teacher standing at the front explaining something no one can follow …. Now he’s writing something on the board … Still 36 minutes! When will the bell for break ring at last?
Anyone who has ever experienced a boring school lesson will be familiar with such thoughts. Time is relative; sometimes it passes quickly – and sometimes, as at times like these, it drags by painfully slowly. Two minutes can go by in the blink of an eye or stretch out like a wad of chewing gum. That is why everyone knows only too well that a school lesson lasts 45 minutes. But why should that be? After all, an hour has 60 minutes. 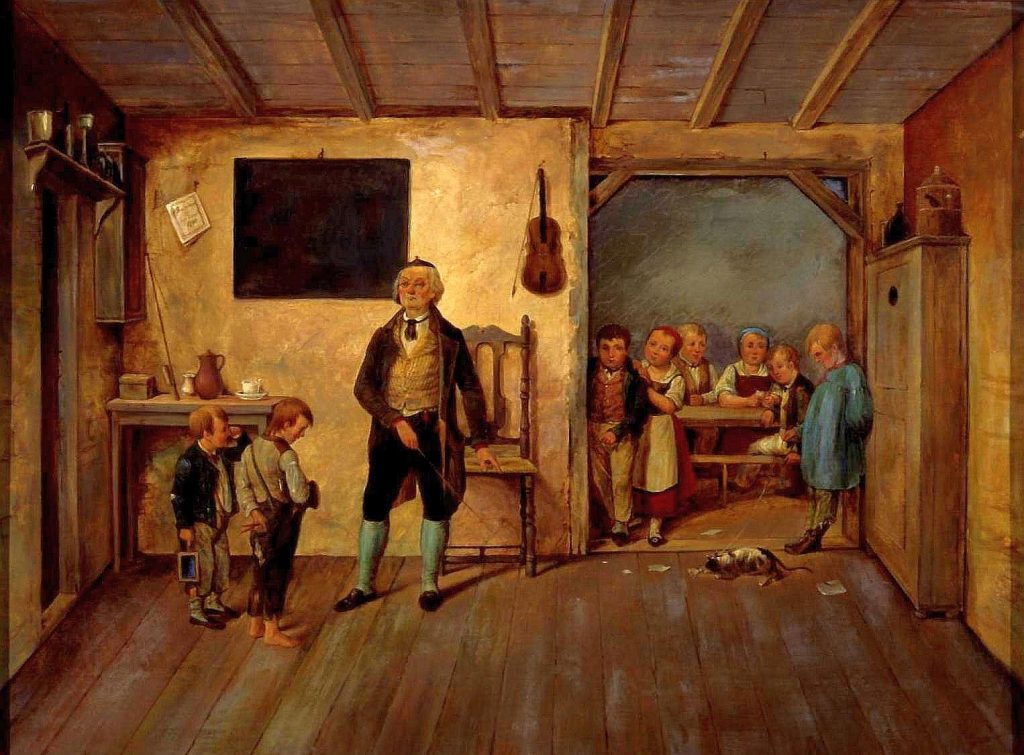 Scene in a village school. The schoolmaster, 1840 © DHM

In the beginning there was Prussia

In the 19th and early 20th century, a school lesson was indeed 60 minutes long. Moreover, it was usual for lessons to take place in both mornings and afternoons. In between there was a long, three-hour break, during which pupils went home, often took lunch to their fathers at work, and then returned in the afternoon.
Afternoon lessons were unpopular. In the early 20th century, critics argued that ‘digestive activities’ took place after lunch, ‘which have an inhibiting effect on the mental faculties. This is particularly true in high summer, when an iron weight often bears down on the entire class.’1 Experts in the new science of experimental psychology conducted experiments to ‘measure tiredness in school children’2 and came to the conclusion that the 60 minute lesson period was damaging to children’s health and not conducive to learning. Specialists therefore recommended that younger children be taught in 30-minute lesson slots and older children in lessons of 45–50 minutes. 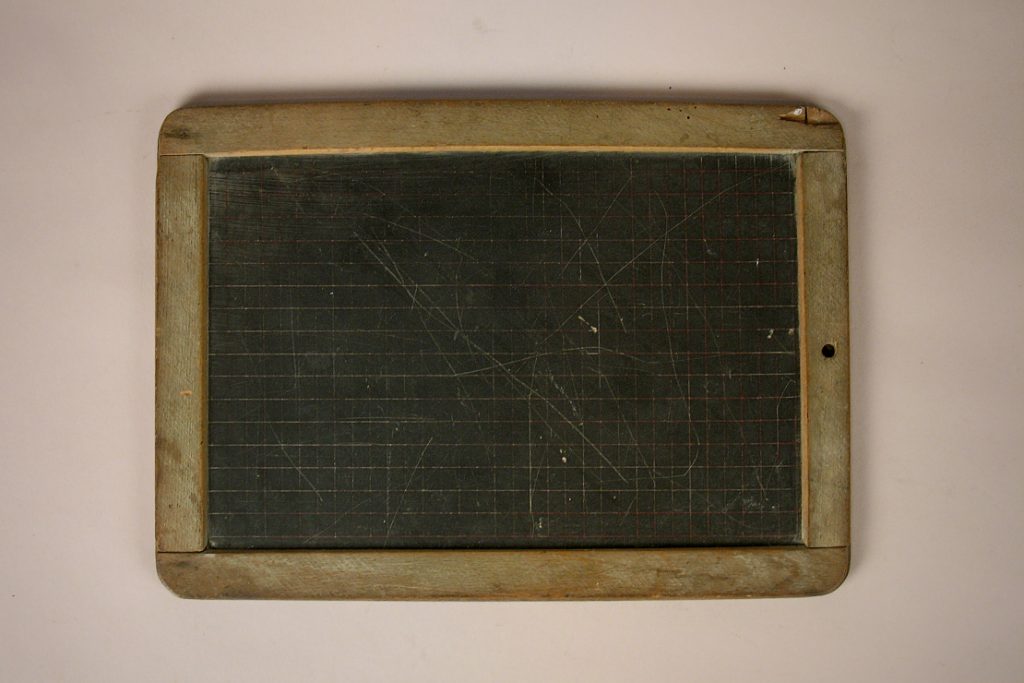 On 22 August 1911, the Prussian Minister of Culture, August von Trott zu Solz (1855–1938), laid down ‘that in all institutions of higher education, all lesson periods are to be 45 minutes long’3. The Prussian decree of 1911 was based on the latest scientific discoveries. The introduction of so-called ‘short lessons’ of 45 minutes meant that all the 30 to 32 weekly lessons could now be fitted into the morning. The unpopular afternoon lessons were abolished, and pupils now had the afternoons off.

This decision, made in the name of ‘educational hygiene’, did not go unchallenged, however. To ensure that lessons could all be fitted into the morning, breaks between lessons had to be shortened – completely contrary to the findings of the experimental psychologists, who had called for longer breaks as the school day progressed. Nor were teachers convinced that shorter periods would result in better learning. In 1906, one teacher had already raised objections to the model of shorter lesson times, declaring, ‘I have never found the 55-minute lesson too long – and no lesson is ever actually longer than that,’4 and stating that 45 minutes was simply not enough time to conduct a sensible lesson. Another teacher summed it up as follows:

‘Galloping consumption! Of course, it can be done […]. The quotas will be filled, no doubt, but it seems to me we are in danger of becoming piece-workers and that the harmony of the lesson will be disrupted by going too fast. Question and answer games, already much too enthusiastically adopted in my view, will make pupils even more mentally agitated than before, and young people will be even less able to express themselves and engage in coherent discourse than they are now. Is it not exasperating? […] “Let’s get it over quickly” – I’m afraid that’s the sentiment which will be uppermost in the mind of the boy on his way to school, and perhaps in the mind of his teacher too.’5

Moreover, according to the Lexikon der Pädagogik of 1917, the shorter period would make lessons easier, since teaching time and subject matter now had to be pared down to the bare minimum. In the opinion of the Lexikon, the edict had no doubt been issued in the interests of rationalisation. The decision of the Prussian Minister of Culture was a matter of economy: with lessons for only half the day, more could be learned in less time. Therefore, ‘half-day schooling should be recognised for what it really is, namely an ill-conceived stopgap’.

The 45-minute model – a success story which is now obsolete?

Following the Prussian example, the 45-minute lesson timetable was adopted throughout Germany. When a decision was made at the end of the Weimar Republic to reintroduce the 50-minute model, there were protests from the teaching profession. The measure would damage the health of pupils and teachers alike and should be stopped: ‘After five 50-minute lessons, it is simply out of the question to expect any sort of mental effort from young people who are still at the development stage or have only just completed it.’ The Prussian administration under Bernhard Rust (1883–1945) reintroduced the 45-minute timetable a few days after Hitler assumed power.7 It remained largely unchanged until the present century. 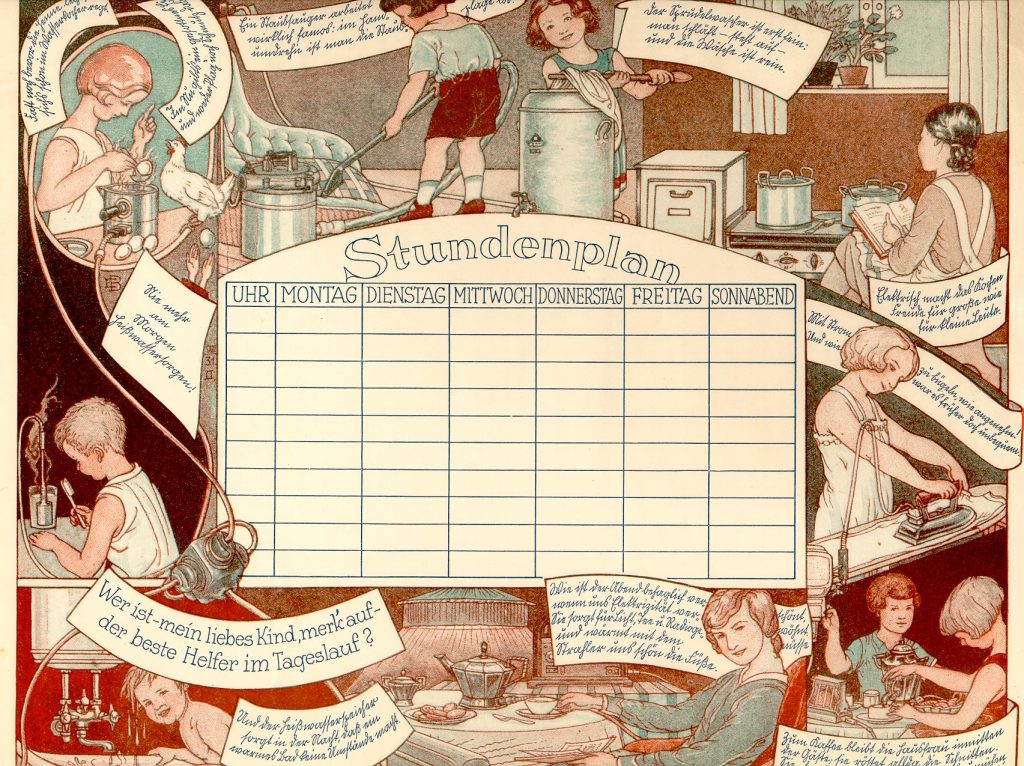 Timetable with illustrations for the application of electric current, ca. 1933 © DHM

While France and the Netherlands have 50 or 60-minute timetables, Finland, Great Britain and Poland have the same 45-minute model as we do in Germany. Here, however, the 45-minute timetable is once again coming in for increasing criticism, based on arguments which are strongly reminiscent of those at the end of the 19th century: it is too inflexible, compresses the learning material into too short a time, leads to agitation and anxiety. For these reasons, increasing numbers of schools are now deciding to adopt a 60 or 90-minute timetable.
Regardless of these new teaching models, however, school administrators still use the 45-minute unit. According to education law, the 45-minute unit is the basis on which every teaching post is managed. So far as the school administrator is concerned, a 60-minute lesson amounts to 1 1/3 lessons. Thus, the 45-minute lesson lives on, even if hidden away in the realms of school administration.8
At the end of the lesson – the bell rings, ushering in momentary freedom! Just like the factory siren announcing the end of work. All the children drop their pens at the same moment: break at last! 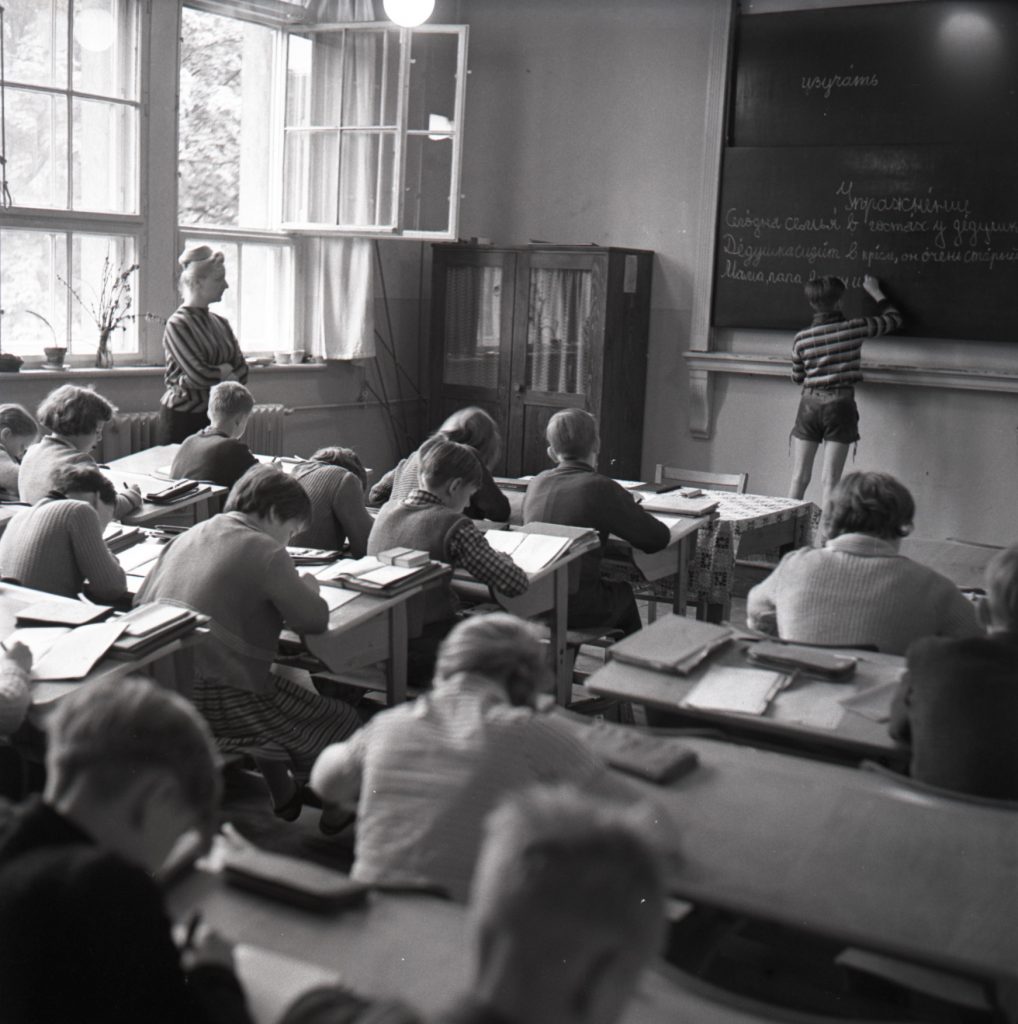