In 2007, Germany officially designated August 22 the “Tag der Fische”, or “Day of Fish”. Every year since then, people all over the country are encouraged to direct their attention toward endangered fish species as well as fish conservation efforts. In line with this mission, our exhibition “Europe and the Sea” addresses the role fish play as both a food resource for Europeans and an object of marine research. Here on the DMH blog, and in honour of Day of Fish, exhibition curator Thomas Eisentraut dives into the historical importance of fishing, as well as the ecological problems associated with both overfishing and marine litter.

Fish has played a critical role in the lives of Europeans throughout the centuries, if not millennia. As far back as 100,000 years ago, inhabitants of the continent were catching fish in the rivers, lakes, and seas. Because it was easy to obtain, abundant, and inexpensive, fish eventually came to be regarded as a “poor man’s food”. Since the Middle Ages, fish has also been of great importance as a food for religious fasting: during fasting periods – that is, for 180 to 200 days per year – eating meat was banned in Europe’s Catholic regions, which led to a massive increase in fish consumption. Fish became a valuable resource, and fishing developed into a lucrative industry. 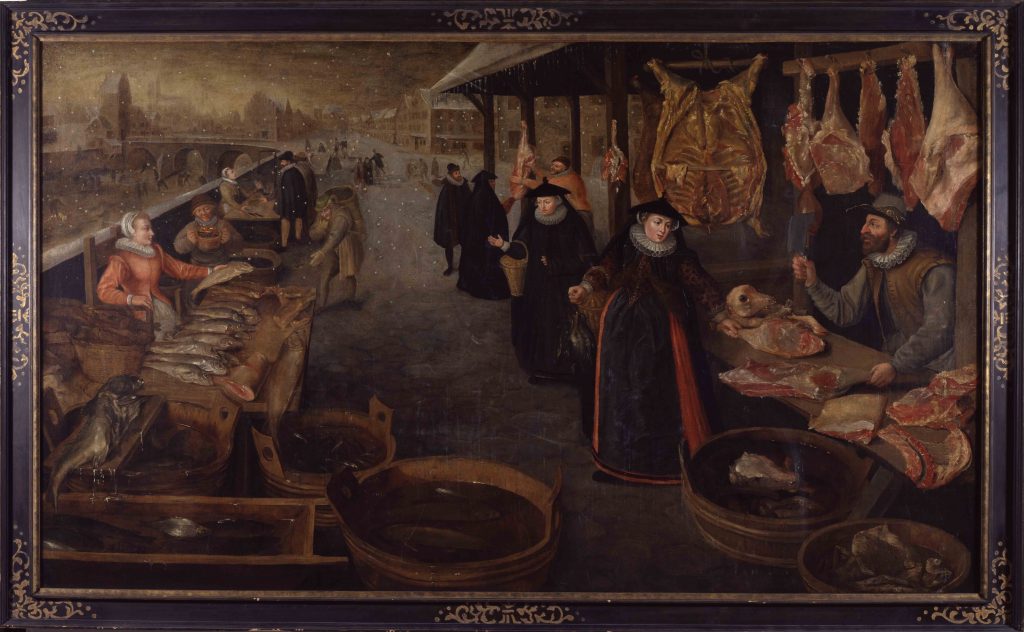 Due to their particularly favourable conditions, the seas of Northern Europe are teeming with fish, even today, an asset for which the region is famous. Many Europeans spend their summer holidays in Norway feasting blissfully on giant, plentiful, ridiculously easy-to-catch salmon. Scandinavian herring – the shoals of which were so massive that they became the stuff of legend – was referred to as the “Silver of the Sea” in written sources dating from the early modern era. Around that time, Swedish bishop Olaus Magnus (1490–1557) was documenting the almost unimaginably vast fishing grounds surrounding Scandinavia; later, in “A Description of the Northern Peoples”, he reported on the various fishing methods and characteristics of several species of fish, his descriptions accompanied by numerous woodcuts. Most of our knowledge about Northern European fishing from this period comes from his accounts.

From Stockfish to Cod Wars

Freshly caught fish must be preserved before it can be transported inland to be sold. Preservation methods in Europe vary widely from region to region depending on geographical conditions, and over time, three practices emerged as some of the most effective: salting, air-drying, and smoking.

The methods used to produce “stockfish” in particular – that is, air-dried cod, but also haddock, pollock, and ling – have remained unchanged on Norway’s Lofoten Islands since the eighth century. To make stockfish, pairs of fish were bound together by their tail fins and hung from a wooden frame (known as a stokk in Norwegian). The climate of the Lofoten Islands, which offered stable atmospheric conditions with constant temperatures and sufficient sunshine and wind, was ideally suited for this preservation technique.

The stockfish production process lasted several weeks, after which the air-dried fish had a shelf life of up to five years. Stockfish could be stacked, making transport economical. As it was seen as a nutritious food for long voyages, stockfish was especially beloved by the Vikings, who devoured great quantities of it. And then there were the members of the Hanseatic League, who – upon recognizing the commercial value of stockfish – obtained the royal monopoly on the trade and shipped dried fish from the Norwegian port city of Bergen to cities and towns all over Europe.

The importance of fishing, both as a means of obtaining food and as an economic resource, is evidenced by the conflicts that have broken out over fishing grounds from time to time. A notable recent example is the “Cod Wars” of the second half of the 20th century. Between 1958 and 1975, a series of disputes arose between Iceland and the United Kingdom over Iceland having gradually extended its Exclusive Economic Zone (EEZ) – a national fishing boundary that excludes foreign fishermen – from 4 to 200 nautical miles. Since December 1982, when the United Nations Convention on the Law of the Sea took place, a 200-nautical-mile EEZ has been internationally recognised for all nations, not just for Iceland. As a result, fishing grounds around the world have steadily expanded.

Increasingly, fish are suffering from habitat loss; what’s more, humans now have the ability to completely deplete all of the oceans’ stocks of fish, with shoals targeted and tracked down using sonar technology, then pursued. Although the invention of modern fishing technology has played a role in these developments, older methods, such as the use of giant trawls, have also caused long-term destruction to aquatic flora and fauna. In 2013, researchers found that 31 percent of the world’s saltwater fish stocks had been overfished, 58 percent had been completely depleted, and only 10 percent had been fished within the recommended limits.

Then there’s marine littering: every day, more and more plastic waste is ending up in the oceans. Scientific studies indicate that by 2050, we’ll have more plastic swimming in our seas than fish. Apart from organic aquaculture, the use of sustainable fishing methods is the only way to ensure that biodiversity and this precious marine resource are preserved for the future.