Europe, Venice and the Sea

An article for the #SalonEuropa blog parade

Did you know that Europe is the planet’s most maritime continent – that is, in terms of the length of its coastline relative to total landmass? Have you ever wondered how Europe’s history might have looked if its inhabitants hadn’t ventured out to sea, crossed oceans, and thus established close contacts with different parts of the world? Have you thought about the role the sea continues to play in Europeans’ lives today? We explore these questions in our “Europe and the Sea” exhibition, and attempt to illuminate just how fundamentally the sea has shaped European history and culture. The exhibition’s curator, Christiana Brennecke, uses some of the most exciting objects displayed at the show to tell the story of how Venice, a small European city state, used its relationship to the sea to become a great power – and how it is still seen today as the very epitome of European culture.

Venice: the prototype of the modern maritime power

Almost everyone who has been to Venice retains a lifelong fascination for the ‘city in the sea’, which continues to enchant new generations of visitors each year. While cityscapes elsewhere are defined by streets and motor vehicles, Venice’s unique charm derives from its canals, vaporetti, and gondolas. Furthermore, Venice boasts city palaces and churches of unparalleled architectural splendour. The wealth of previous centuries, which has lost none of its power to dazzle, was bequeathed to Venetians by the sea. Situated on various islands close to the mainland, the lagoon city’s geographic setting – and the seafaring character and sense of place this instilled – provided the essential ingredients for Venice’s rise as a leading maritime power in the Middle Ages. Within just a few centuries, Venetians had established extremely lucrative maritime trade routes. The city (which was probably first established in the 6th century) was transformed into a trading hub between the Holy Roman Empire and the East, and so became the richest city in Europe. This economic success was in turn secured through the use of naval might and military strategies, which became a prototype for modern European maritime powers. In order to achieve ‘mastery’ of the seas and expand its maritime empire, Venice created a permanently battle-ready navy that was without peer in Europe. The city also established a system of bases in order to secure control of its sea routes – an approach that was subsequently imitated by all major maritime powers. 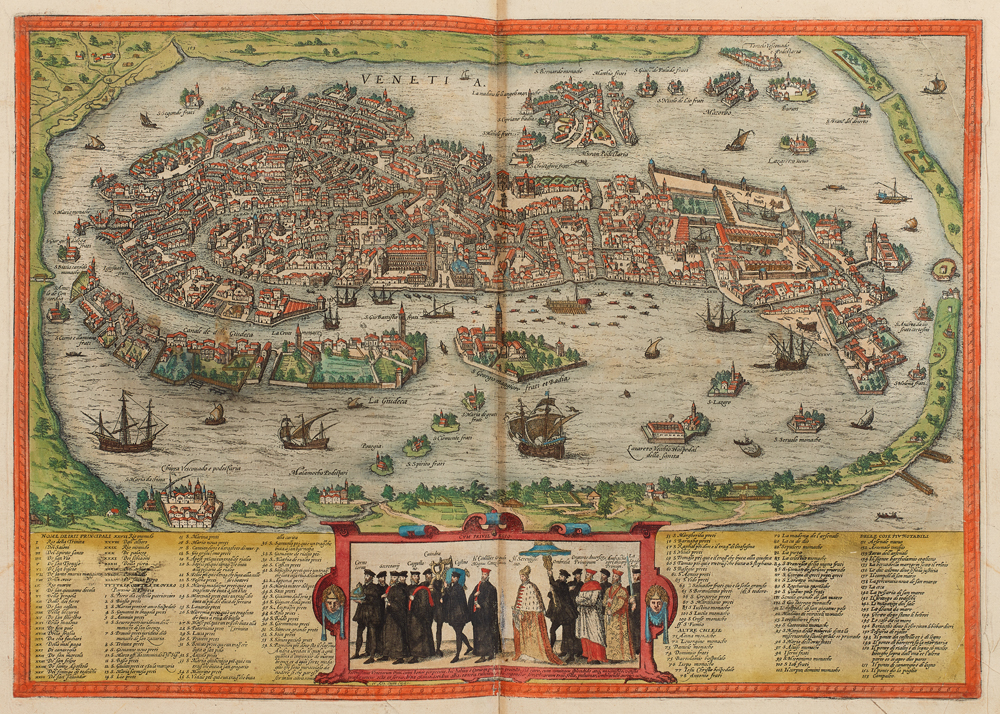 Theatre of power: the model of the last Bucintoro of 1728

More than any other European power, Venice also knew how to articulate the city’s success and claim to power . Grand palaces were built, magnificent festivals celebrated, and every great maritime victory captured for posterity in splendid paintings and other works of art. The city presented itself as the ‘ruler of the sea’, which climaxed in the ‘Marriage of the Sea’ ceremony. This was held every year on Ascension Day to mark Venice’s symbolic marriage to the sea. Shown at the exhibition for the first time in Germany, the prize-winning model of the last ever Bucintoro is a reminder of this annual ‘wedding’.

The Bucintoro, as the Venetian doge’s magnificent state barge was known, was taken out to sea for ceremonial purposes in a tradition dating back to the 14th century. The barge achieved Europe-wide fame for the role it played in the Ascension Day festivities, when the doge was rowed out to sea as part of a large procession of ships. With the words, ‘We wed thee, sea, as a sign of true and everlasting domination’, the doge then threw a golden ring into the waves and so symbolically strengthened Venice’s primacy over the Adriatic. The procession included every member of the state leadership, although foreign diplomats were also welcome to attend, as the event marked a perfect opportunity to demonstrate Venetian power. Measuring nearly 35 metres in length, 7.5 metres across, and 8.5 metres in height, the last Bucintoro (built in 1728) could accommodate the doge’s throne and about 90 dignitaries. It was rowed by 168 men, who were typically recruited from the ranks of workers employed at the Arsenal (the Venetian shipyard).

Built to a 1:25 scale, the model was based on the (still surviving) original designs of the last Bucintoro, which was built in 1728 and destroyed by Napoleonic troops in 1798. Referring closely to the original designs, Aldo Baradel (1907–1985) created this faithful rendering of the magnificent state barge over five years of painstakingly detailed work. Baradel’s efforts garnered a number of prizes, and his model is still regarded as the best reconstruction of the Bucintoro. Accorded pride of place at the heart of the exhibition’s section on maritime power, the model is a uniquely potent reflection of the Venetian maritime republic’s wealth and dominance. It was thanks to the sea that Venice became a great European power, developing innovative strategic approaches that served as a blueprint for the subsequent rise of Portugal, the Netherlands, and Great Britain as maritime powers. Without the sea, the history of Europe would have taken a very different course – reason enough to take another closer look at Europeans’ multi-layered and shifting relationship to the sea.