Christmas is long since over and we are still inviting you to the upper floor of the Zeughaus to visit the exhibition “Angel, Swastika, Dome of the Rock”. At closer examination it becomes clear that the display is neither Christmassy sweet nor cute. It shows the degree to which these ornaments reflect political, economic, technical and educational history, and not least the zeitgeist. In this blog Regine Falkenberg, curator of the exhibition and head of the DHM everyday culture collection, introduces selected objects to us that show why a visit to the exhibition in January and February is still worthwhile, to say the very least. 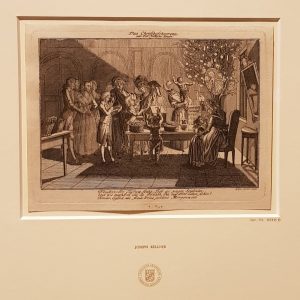 The small framed etching from 1770/1780 at the beginning of the exhibition shows a family distributing presents on the morning of 25 December, Christmas Day. It is an upper-class, urban household. In a corner of the room stands a tree, which upon closer inspection turns out to be a bouquet of oak branches. They are decorated with “Springerlen”, a kind of southern German biscuit with anise, and with apples and a picture of an angel illuminated by candles. The reason why our intervention is able to show this original etching on loan from the Munich State Graphic Collection is as follows:

Representations of decorated Christmas trees before the 19th century are rare and are not found in the collections of the Deutsches Historisches Museum. On financial grounds I considered showing the copy of a print that has often been reproduced in the relevant literature, usually without naming the original source, and that shows pretty much what a bourgeois Christmas celebration in the 19th century looked like. I found a copy of the engraving in two leading photo agencies and ordered a photo “in the size of the original”. But surprisingly, neither of the agencies had any idea how big the original was or where it came from. This is a case for the DHM which works on the premise that if it has to be a reproduction, it should be as close to the original as possible and correspond to the historical viewing habits. So I began searching around for an original etching with this motif.

The popular name of the etcher, Joseph Kellner, was not very helpful in finding the original. But detective instinct finally led to a historical forum in the Internet and from there to a museum director who had written a note in a remote magazine in 1895. He criticised that an author had published a print without naming the source! He rectified the omission, which led me to the print gallery in Munich, now the Staatliche Graphische Sammlung. After negotiations with colleagues in Munich it was possible to get the original etching on loan, which you can now admire in the Berlin Zeughaus. 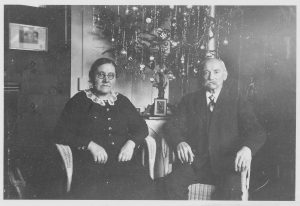 Press reports led to an important addition to the exhibition, for me impressive proof that communication about exhibitions functions. Despite extensive research we still did not have any material to illustrate the fact that Nazi emblems were used to decorate Christmas trees. Although over the years we had scrutinised many hundreds of photos and family albums under the magnifying glass for evidence of swastikas, we had found nothing. In the section on “Swastika and Yule decorations” we had therefore written:

“In contemporary photos of Christmas trees one does not find Nazi emblems.”

Many journalists spread this statement in radio and press reports. And soon thereafter a lady and a gentleman wrote that their photo albums had not been “cleansed” of Swastika emblems. They sent us their “evidence”, which we are now showing our visitors as reproductions. Many thanks for the personal initiative that made this important correction possible. 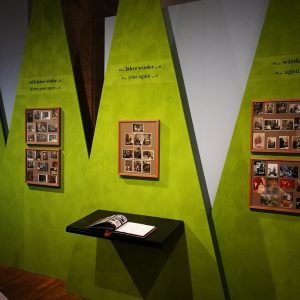 A lucky discovery for me was the photo album with pictures of the Christmas celebrations of three generations of a merchant family from Mainz. A friend of mine who was sick and tired of hearing me use the term “Christmas tree decorations” brought me in contact with the owner of this impressive album. The gentleman gave me permission to make reproductions of the album so that exhibition visitors can now take it in hand and leaf through the pages. The album strikingly documents how the family adapted themselves under the Christmas tree to the political circumstances during the Nazi period. In 1938 the son wears the uniform of the Reich Labour Service (RAD), in 1939 he is in the SS, in 1942 he has become an SS-Sturmmann, while his father presents himself as captain in his officer’s uniform. A gap of eight years arouses our curiosity: between 1943 and 1950 there are no photos of the Christmas celebration. We find the reasons in the father’s diary entries: service in the Second World War, prisoner of war, flat destroyed by bombs, finally taken in by relatives, end of the war, the founding of the Federal Republic and a move into a new flat. A very typical family history illustrated in this photo album. 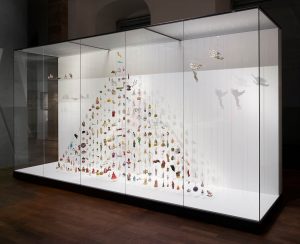 And finally I would like to introduce a special highlight of the exhibition: the five-metre-long showcase with the installation “Christmas tensions” by the artist Ulrich Vogl and the set designer Evi Wiedemann. The fascinating construction made of delicate steel cable and thin steel wire reflects the fragile character of the 243 Christmas tree objects and brings out the lightness of the figures, animals, fruit, baubles and everyday objects from the DHM collection. The decorations are clearly displayed, hanging above each other on a level near the glass casing of the cabinet. The intention was to attract the attention of the visitors to the craftsmanship, but also the volatile nature of mass production, which often gives the ornaments their special character and differentiation despite the great quantities in which they are available. Traces of damage are evidence of their use: the wooden canary has been scorched by a candle, the cotton pig, more than a hundred years old, has lost an ear. The motifs show that everything can be used to decorate the tree: a nit (imp) from Denmark, an Indonesian snowman with a gift, Graf Zeppelin with his airship, Karl Marx, an angel in a kimono from Japan, a dinosaur, delicately painted baubles from Kashmir, a mobile telephone and a computer monitor. My personal favourite in the showcase is a little Martian with green skin and cute antennas who was most likely not created on Mars, but in Italy. 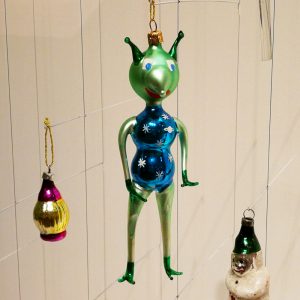