“He was still so young”

On 1 and 2 February 1989 a delegation of the German Bundestag visits Hungary. The delegates want to inform themselves about the situation of the refugees. More than 13,000 Romanian citizens (most of them Hungarian native speakers) … came to Hungary in the year 1988, … claiming to be victims of human rights violations and refusing to return to their country.1 The delegation travels to Debrecen in order to visit a refugee camp.

After the trip the head of the delegation, Otto Schily, says about the Romanian refugees:

It is shocking that these people are not allowed to speak their mother tongue and practise their culture; their children cannot learn the native language of their parents at school. In our opinion this is not consistent with the principles of European civilisation and not with the principles laid down in the recently signed Final Act of Vienna …2

The subject of human rights occupies not only Otto Schily in these first days of February – the word also escapes the lips of Erich Mielke, head of the Stasi, when he outlines the Helsinki Accords agreed upon at the CSCE conference to his Stasi colleagues:

Irrespective of the fact that the Western countries … have succeeded in largely asserting their ideas on the question of human rights in the [CSCE] Final Accords, it is nevertheless the case that … the legalisation of activities of so-called Helsinki monitoring groups would have considerable domestic and foreign political effects under the concrete conditions of the GDR. Behind this smoke screen, subversive groups and powers in the GDR could legally organise themselves and, openly supported by the enemy and its institutions and allegedly safeguarding human rights, … act against the socialist state and social order of the GDR. … In accordance with a central decision we will therefore not allow a legalisation of the so-called Helsinki monitoring groups in the GDR and will design and apply our relevant legal provisions in a way that will prevent any activity from being undertaken by these groups …3

The agreement of the Vienna CSCE conference recently signed by 35 states of the Eastern and Western blocs is praised by Foreign Minister Hans-Dietrich Genscher, who states: A new quality of dialogue is developing between West and East, but he also expresses his … frank concern, for human rights continue to be violated or disregarded. …4

Björn Engholm, Minister-President of the Land Schleswig Holstein, carries on talks in the GDR in these days. The Stasi is satisfied with his visit and notes:

B. Engholm acknowledged … the great attention paid in the GDR media to his meeting yesterday with E. Honecker, particularly in “Neues Deutschland”, and remarked that he would be happy if he had such press coverage in his own federal state Schleswig Holstein.5

For Csilla von Boeselager 4 February is a very special day because her many years of activity are finally bearing fruit: she has succeeded in founding the first non-state aid organisation in the Eastern bloc, the Hungarian Maltese Charity Service (MMSZ). Born in Hungary, she fled before the advancing Red Army as a child and now tells a friend about the founding:

Many more people than we expected – altogether 31 adults – came to the founding assembly of the Magyar Máltai Szeretetszolgálat (MMSZ) … in the Zugliget parish. The founding … became a national event. All the newspapers reported on it. … The interview with Pastor Kozma and me took place in the church!! And that in a country where the priests are not even allowed to appear dressed as priests outside of the parish premises.6

The first February issue of Spiegel magazine shows a friendly smiling Adolf Hitler, surrounded by friendly smiling men, women and children, decorated officers stand on the left, on the right a group of women with children in traditional costume, a boy presents a bouquet of flowers to the Führer. The photo is almost a half a century old. Der Spiegel writes that the intelligence service is afraid there will be radical right-wing riots on the hundredth anniversary of the Führer’s birth:

Neo-Nazis want to mark Hitler’s hundredth birthday on 20 April with actions at home and abroad. Intelligence service agents reckon with violent clashes. … Unlike in previous years when right-wing extremist groups met in the backrooms of German pubs and drank a toast to the Führer, this time on 20 April an extensive propaganda campaign with flyers and a major rally have attracted attention throughout Europe. … Targets of attacks could be housing units of foreigners, public buildings and facilities of the Allies.7

The roots of fascism have not been eradicated in the Federal Republic, is the headline of Neues Deutschland on this 4th of February.

A principal cause of the increasing neo-Nazi machinations in the Federal Republic, according to the president of VVN – Union of Persecutees of the Nazi Regime, Chaplain Dr. Joseph C. Rossaint, lies in their meanwhile 40 year history itself. After 1945 their country had never eradicated the real roots of fascism.8

In that same year Neues Deutschland prints a positive inversion of the sentence in reference to the SED state: In the GDR the roots of fascism have been eradicated forever.9

In the GDR, where there were officially no neo-Nazi machinations, in 1988 some 6,000 neo-Nazis were recorded, … of which … around 1,000 … are recidivist and ready to use violence … . Every month in 1988 up to 500 crimes were registered from this milieu. They included violent criminal acts out of explicitly xenophobic motives.10

The Federal Intelligence Agency reports on more than 103 violent crimes connected with right-wing extremism in the Federal Republic in the year 1989, to which are added one homicide, 12 arson attacks, 52 bodily injuries and 38 property damages, as well as 1483 acts of propaganda without the use of force. 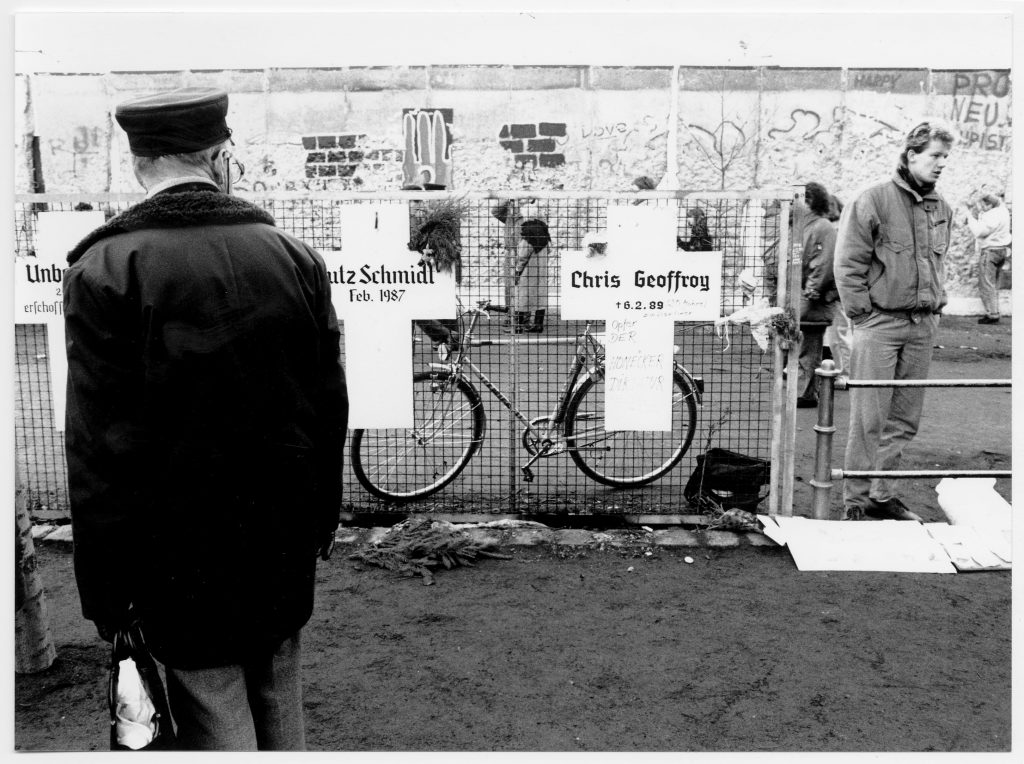 Gemütlichkeit III is the name of the Berlin allotment colony through the flowerbeds of which Chris Gueffroy and Christian Gaudian creep on this Sunday evening, 5 February, they are both still so young, just turned 20, and they want to get to the Britz connection canal. Shortly before midnight they are standing before the secondary border wall. The barriers between East and West are secured in multiple ways, with sirens, signal lights, bouncing mines, tripwires, observation bunkers and towers, vehicle-blocking trenches and evidence-securing devices and so-called mobile blocking elements, in other words, vicious dogs. Common parlance for this prohibited area is the death strip, but Gaudian and Gueffroy are not looking for death, they are seeking a free life.

They have overcome the first obstacles, have passed the border signal fence and are running through the control strip, the alarm sounds, the two men on duty, Andreas K. and Peter S., both 25, call out from a distance of 100 metres Halt! Don’t move!, but they continue to run, the last fence is hardly 5 metres away when Peter S., father of two small children, loads his submachine gun, kneels down, aims and fires six shots, he was aiming at the legs, he later says, Andreas K., he, too, a father, will later say he inadvertently placed the lever of his Kalashnikov on automatic fire, a second pair of border guards appear, Gaudian and Gueffroy try to climb over the metal mesh fence with the grappling hook they have brought along, under sustained gunfire, the head guard Mike Sch. aims, but doesn’t fire, calls to his partner Ingo H., Shoot!

Ingo H. aims through notch and bead sights, his first shots penetrate the right foot of Chris Gueffroy, Ingo H. fires again, his shot crashes into Chris Gueffroy’s body, entering at the left nipple and exiting on the back edge of his armpit, Gaudian throws his ID card over the border wall, Gueffroy grips his stomach and slumps to the ground, the head guard shouts Swine! at him and arrests him, Sow! he says and points his pistol at Gueffroy, who lies motionless on the ground, if he moves, Mike Sch. shouts at him, he will immediately be shot dead, but Chris Gueffroy does not move, he dies only a few minutes after being shot, his heart is smashed.

This particular incident, it says in the Stasi protocol, is a border-tactical action: the attempted breach of the border was prevented on the part of the border troops of the GDR under utilisation of firearms. …

Around the beginning of February 1989 they (Gueffroy and Gaudian) came to the conclusion, due to their negative attitude towards the social conditions in the GDR, that they would find better living conditions in Berlin (West). They thereupon decided to cross the state border of the GDR in the aforementioned section by means of technical aids.11

All of the four border guards, having fired a total of 22 shots, receive a bonus of 150 marks each for the purpose of calming them down, for they are said to be downcast and despondent, and right after the shooting of Chris Gueffroy they are given alcohol in the presence of officers in the company café bar.

On 7 February the Hungarian intelligence service also reports a strictly secret incident to the party leadership: … Early in the morning an unknown person at a bus stop in Györ grossly insulted deputy lieutenant-colonel József K., dressed in uniform: “Here comes a dirty communist!”, “The communists bear the responsibility for our disastrous economic situation, all of them should be hanged.” The unidentified person thereupon spat in the direction of the lieutenant-colonel. Colonel K. reacted so resolutely that the unidentified person finally ran away. The 15 to 20 citizens who were at the bus stop during the incident remained unconcerned.12