Coup by Teleprinter: the ‘Valkyrie’ Plans to Overthrow Hitler on 20 July 1944

20 July 1944 is a date of great significance in the history of resistance to the Nazi regime. Under the code name ‘Operation Valkyrie’, a number of high-ranking German military officers organized an attempt on Hitler’s life, aiming to overthrow the Nazi regime. The task of setting off a bomb close to Hitler fell to Colonel Claus Schenk Graf von Stauffenberg. This assassination attempt failed, but it nonetheless served a signal to launch active resistance, writes Thomas Jander, head of the DHM Documents Collection, in the DHM Blog.

In the aftermath of Germany’s victory over France in 1940, there may have been a plan to assassinate Adolf Hitler while he inspected troops at a military parade in Paris. A lieutenant of the 9th Potsdam Infantry Regiment, Fritz-Dietlof Graf von der Schulenburg (1902–1944), later one of the officers involved in the July plot of 1944, wanted to shoot Hitler during the march past of troops. Today, we cannot know if this earlier plan even existed. However, in June 1940, Hitler was at the very height of his popularity: had the attempt been successful then, it would probably have strengthened the Nazi regime, rather than undermining it.

Four years later, support for the National Socialist government and for Hitler himself was much weaker. The Wehrmacht (German army) was retreating on all fronts, and the nonstop bombardment of German cities had transformed the population’s initial euphoria into weary obedience. By the summer of 1944, it seemed there was a greater chance to overthrow Hitler, end the war, and stop the Holocaust and other genocides. This at least was the thinking of a small number of officers and civilians hostile to the regime, many of whom saw the assassination of the Führer as the only way to achieve these goals. But unless it could oust the entire regime, a (successful) attack on Hitler would be quite useless. Plans for a coup d’état had been present among senior military circles as early as 1938–39, in groups centring on Hans Oster (1887–1945) and Wilhelm Canaris (1887–1945) in military intelligence and counter-espionage, and Ludwig Beck (1880–1944) and Franz Halder (1884–1972) in the general staff of the Army. However, this ‘first generation’ of military opposition lacked the means to implement their plans.

The turn to rebellion

In 1940, the situation changed with the appointment of Friedrich Olbricht (1888–1944), an opponent of the regime, as head of the General Army Office (AHA) of the Reserve Army Command (BdE) in Berlin. With Olbricht in charge, those opposed to the regime now had possible access to military forces stationed within Germany. In the brutal winter of 1941–42, the losses of the Wehrmacht mounted so quickly that plans for a rapid mobilization of reinforcements, codenamed ‘Valkyrie’, were worked out within the AHA. Beginning in 1942, Olbricht expanded this ‘Valkyrie’ planning: as well as replenishing the reserve army, the plans now also included its possible deployment against unrest on the home front, for example rebellions by prisoners of war. However, the documents would require substantial revision to turn them into a blueprint for a military coup. Moreover, any such coup would need senior figures willing to take the extreme risks this course of action involved.

In the summer of 1943, Henning von Tresckow (1901–1944) began working closely with Olbricht. Von Tresckow was an experienced front-line officer and a committed opponent of the Nazi regime. He began to update the Valkyrie plans, above all by creating rapid reaction units within the Reserve Army. The contingency plan was formally issued on 31 July 1943. When Tresckow returned to the front in September 1943, Claus Schenk Graf von Stauffenberg (1907–1944) took over the task of turning the rapid response plans into the outline of a coup d’état. Although the two men had known each other since 1941, their paths to active resistance had been quite different. Both were aristocrats and officers of the General Staff, but Tresckow was a Protestant and a Prussian, while Stauffenberg was a Catholic from Swabia. Tresckow became an opponent of the regime in the summer 1941, in response to the so-called ‘Commissar Order’, which ordered the summary execution of Soviet political commissars. But Stauffenberg’s realization of the criminal nature of the war and  the regime had been more gradual. After suffering severe wounds in the North African campaign in April 1943, he became a key driving force within the military resistance. On 1 September 1943 he became Olbricht’s chief of staff and thereafter worked continually on the ‘Valkyrie’ plans. The orders developed by Tresckow had  been issued in early August to the commanding officers of military districts (at the time of the 1944 coup attempt, Germany was divided into seventeen military districts). Now, every Friday, these commanders had to report the strength and readiness of the ‘Valkyrie’ units to Olbrecht’s staff, giving the AHA precise, up-to-date information on the troops available for any coup attempt.

The order to trigger ‘Valkyrie’ was to be sent by teleprinter: it would command units to prepare for deployment within six hours, then to form into task forces and proceed to their objectives. Specific information on the objectives was to be issued in additional orders, mainly developed by Claus von Stauffenberg and his brother Berthold Schenk Graf von Stauffenberg (1905–1944). These would form the concrete framework for the July coup attempt.

The first teleprinter message would declare a state of emergency. Beginning with the announcement that

it then claimed that

‘[a]n unscrupulous clique of party leaders without frontline service has exploited this situation to stab the fighting front in the back and seize power for their own selfish ends.’

The declaration transferred executive power within the Reich to the Wehrmacht, legitimating all subsequent military actions. The message would be signed by Erwin von Witzleben (1881–1944), in his post-coup capacity as supreme commander of the Wehrmacht. Witzleben had previously been reassigned to the so-called ‘Officer’s Reserve’, but the conspirators hoped he retained sufficient authority and status for front-line troops to accept his command. 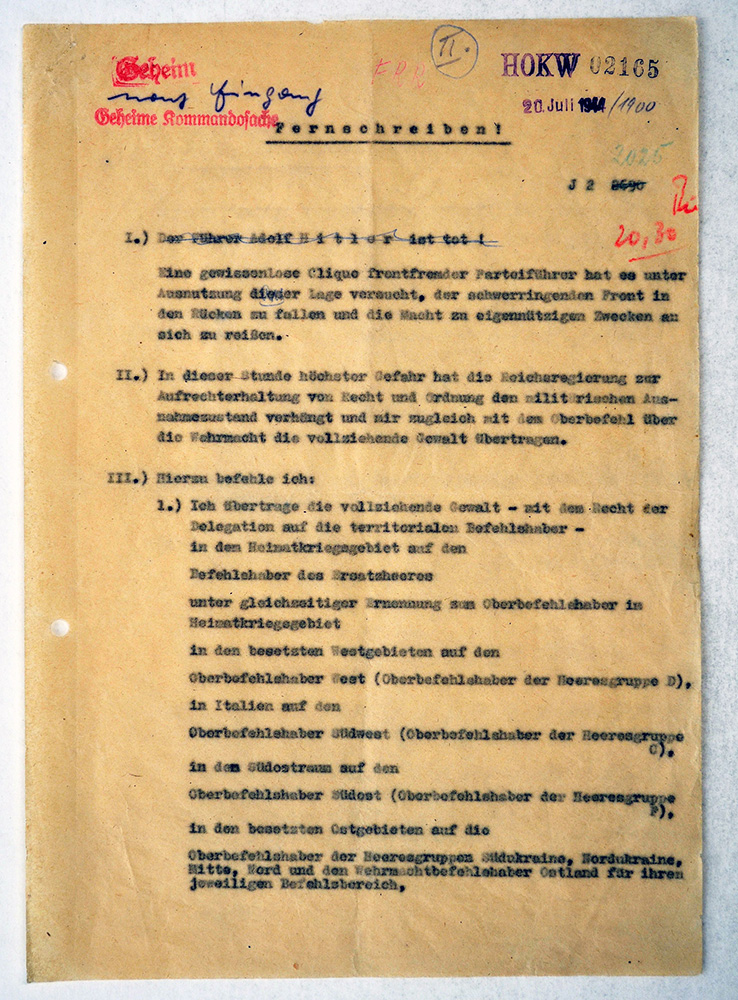 A second teleprinter message ordered the occupation of important points of communications infrastructure (transmitters, signal booster stations, telegraphy offices, telephone exchanges, etc.), the arrest and  emoval from office of regional party leaders and high-ranking SS officers, the occupation and rapid closure of concentration camps, and the incorporation of the Waffen SS into the Wehrmacht. The final sentence of the order forbade acts of revenge. It concluded:

‘The population must be made aware of the break with the despotic methods of those previously in power’,

clearly announcing the conspirators’ opposition to the Hitler regime.

Four further teleprinter messages contained a number of martial law decrees, mostly written by Berthold von Stauffenberg. These included a ban on carrying weapons, instructions to continue working as normal (in factories, public offices, etc.), as well as decrees on jurisdiction and sentencing. Equipped with these orders, the various military task forces were to advance on their assigned objectives.

Implementation of the orders in military districts was to be the responsibility of reliable liaison officers who were privy to the conspiracy, and in civilian organizations by ‘political representatives’. The conspirators had long been in contact with civilian resistance forces: Beck and Oster had ties to the group associated with Carl Friedrich Goerdeler (1884–1945), while officers around Tresckow and Stauffenberg had connections to the ‘Kreisau Circle’. In this way, a heterogeneous, interconnected resistance network came into being.

The plans were complete by the beginning of 1944, but the plot still needed people prepared to undertake the assassination. A number of individuals and of versions of the planned attack on Hitler were judged unsuitable. Eventually, time began to run short. The arrest of several conspirators (including Helmut James Graf von Moltke (1907–1945) in January and Julius Leber (1891–1945) in July) made the situation still more urgent. Beginning on 1 July 1944, Stauffenberg, as chief of staff of the BdE, had personal access to the daily briefings in Hitler’s headquarters, and he made the decision to carry out the attack himself. In later testimony to a Nazi court, Adam von Trott zu Solz (1909–1944), one of the conspirators, claimed that Stauffenberg ‘panicked as time ran out’. In July 1944, Tresckow is reported to have said:

‘[…] what is important is no longer the practical objectives of rebellion, but rather the fact that the German resistance movement dared to take the decisive step, before the eyes of the world and of history.’

Nonetheless, several moments of opportunity – on July 6, 11 and 15 – were allowed to pass: the attack was meant to kill Hermann Göring and Heinrich Himmler as well as Hitler, but they were absent on those dates. Right to the end, the inner circle of conspirators remained divided over the correct actions and priorities. Preparations were made even more difficult after a first attempt, on July 15, was called off at the last minute, turned instead into a practice run for the real thing. What it highlighted above all was the importance of Stauffenberg’s presence in Berlin. On 20 July, Stauffenberg had to carry out the assassination attempt in Hitler’s ‘Wolfsschanze’ (Wolf’s Lair), while also organizing the coup in Berlin. The excessive demands proved too much for him.

The explosive device in the Wolf’s Lair detonated at 12.42 pm, killing four people, but failing to kill the German leader. Stauffenberg arrived back in Berlin at 5 pm. Despite the failure of the assassination attempt, he tried in vain to keep the coup on track and coordinate the chaotic events. 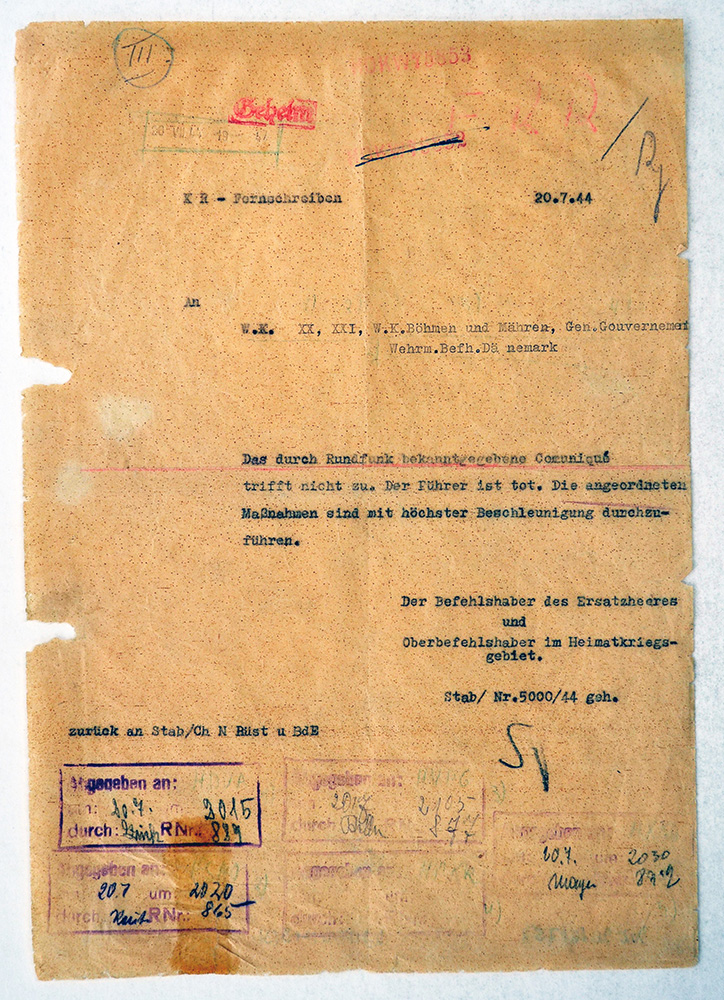 The futility and desperation can be seen in one of the final teleprinter messages of the coup: after nationwide radio broadcasts had reported Hitler’s survival, Stauffenberg continued to attempt to persuade military districts that the Führer had in fact died, maintaining his efforts until 9.05 pm. Some two hours later, he, Olbricht, Werner von Haeften (1908–1944) and Albrecht Ritter Mertz von Quirnheim (1905–1944) were arrested and summarily executed.

By the end of the war, these first four victims of the coup attempt would be followed by many others. Those whom the SS Security Department investigations considered to have participated in the conspiracy were condemned in degrading show trials held before the so-called People’s Court. Between 600 and 800 people were arrested, with almost 200 of them eventually facing execution.

The assassination and coup attempts failed for a number of reasons, above all the unpredictable circumstances of 20 July 1944. The conspirators relied too heavily on the formula ‘Orders = Obedience’, which they were convinced would bring success. Another decisive reason, of course, was Hitler’s survival. If Hitler had been killed – an action whose legitimacy was the subject of long discussions in the various resistance circles – soldiers of the Wehrmacht would have been released from their personal oath of allegiance to him. His death would also have prompted several high-ranking generals, discontented but undecided, to participate in the putsch attempt.

It is impossible to pass moral or technical judgement here on the attempts made by the military opposition to bring Nazi rule to an end, and with it the ongoing campaigns of war and murder across Europe. Nonetheless, we should remember that seventy-five years ago there were courageous men and women prepared to resist a criminal regime, and we should understand the possibilities and methods of their resistance.

I remember. Last words of one of my distant relatives.
“We took upon ourselves this deed to protect Germany from a nameless misery. It is clear to me that I shall be hanged for it, but I do not rue my deed and hope that another, in a luckier moment, will undertake it.”