German Colonial History: On its New Design in the Permanent Exhibition

Our new section of the exhibition on German colonialism between 1880 and 1914 replaces the previous, heavily criticised presentation of Germany’s colonial past. On a surface area of around 100 square metres it sheds light on the topics of “Economy and Global Trade”, “Colonial Contact Zones and Societies”, “Domination and Violence” and “The Colonial Wars: Self-assertion, Resistance and Genocide”. It focuses primarily on the former German colonies in Africa. A separate chapter is also devoted to the German trading colony in imperial China, the Kiautschou Bay Concession.

Our research of the DHM’s own collections and our correspondence with external historians and museum experts clarified one aspect in the preparatory phase: the new section cannot present a final result, but will provide an initial discussion basis for revisions in the DHM and for its diverse audiences. The aim is to enter into an open, concerted discussion about German colonial history and its (re-)presentation in the museum.

The central starting point of this confrontation with the past are the objects themselves in our collections, which we are re-examining for the new exhibition sequence with respect to what they demonstrate, where they come from, and in what contexts they were collected and exhibited. 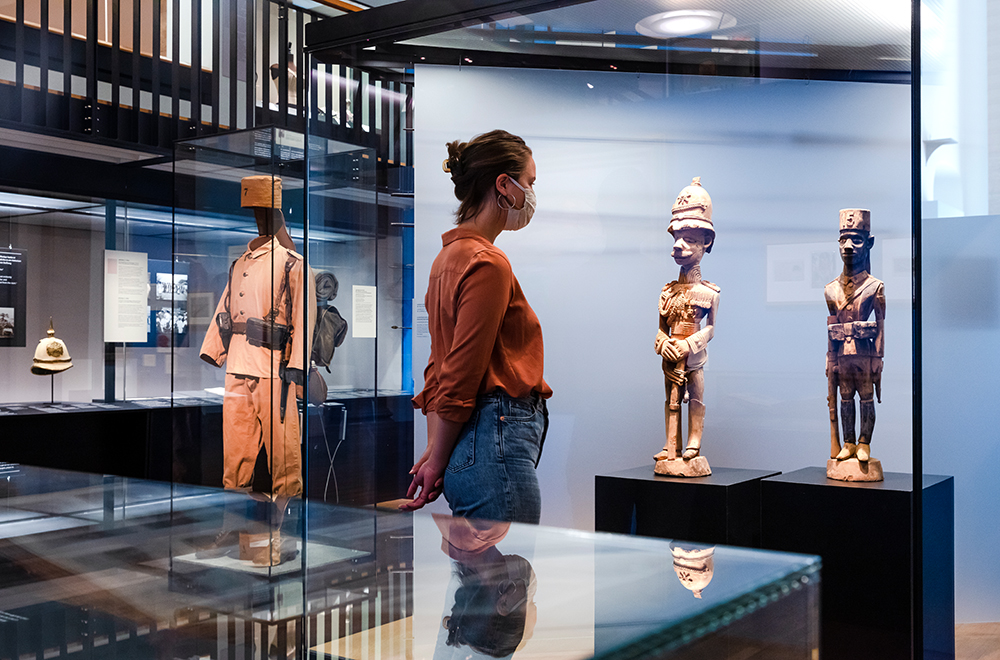 Objects in the stocks of the DHM that are thematically connected with German colonial history tend to reflect the – often derogatory and racist – perspectives of the colonisers on the people and cultures of the colonised areas in Africa, Asia and the Pacific. In other words, they transmit the stereotypical colonial images that were globally circulated around 1900 and passed on to following generations, up to the present day.

The decorated packaging of cocoa or soap as well as toys reveal how racist perceptions attracted a large customer base. Appealingly designed, such everyday colonial articles and consumer products block out the conditions under which they were produced; their visual effectiveness and imagery distort and embellish the reality of German colonial policy. Because these objects do not tell the whole story or tell a separate story detached from reality, they will be juxtaposed in the section on “Economy and Global Trade” with the violent and still unreconciled destruction of African cultural and economic formations as a result of colonial policies.

The collections’ singular objects of African or Chinese origin tell us through the history of their acquisition – as far as it is known – more about the motives of the European collectors and their interpretation of the objects than about the actual contexts in which they came into being and were utilised, or about the significance ascribed to them by the indigenous societies. It will be our task in future to examine the colonial objects held in our museum in greater depth in order to learn how to interpret and exhibit them suitably and to communicate their relevance. This requires a dialogue with scholars and curators from the countries of the former German colonies. 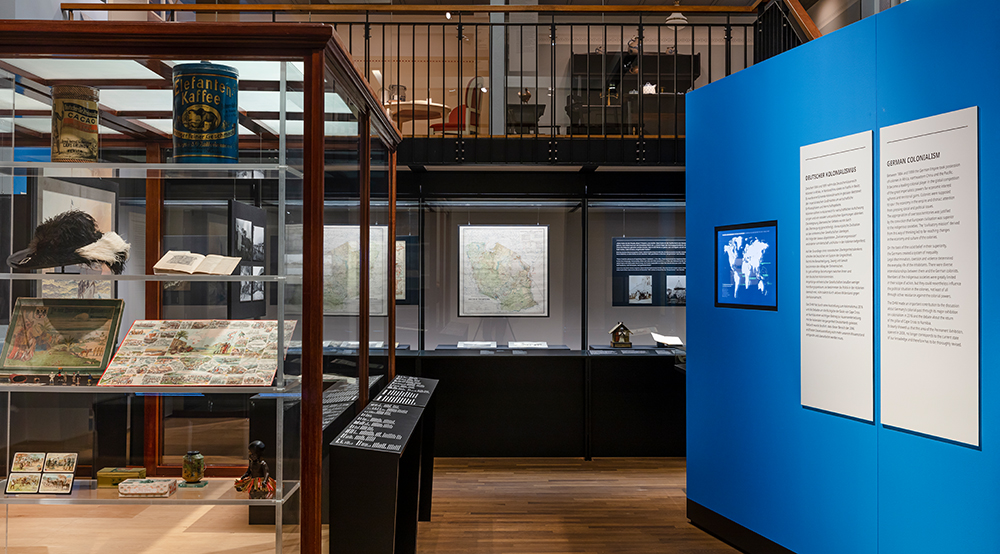 Entrance to the new exhibition section on the theme “Economy and Global Trade”; on the left the historical showcase of the Berlin department store Wertheim with colonial consumer products © Deutsches Historisches Museum/David von Becker

Getting ambivalent objects to speak for themselves

The objects in the collections are material evidence in which the perspectives of the colonisers are inscribed. Despite or precisely because of their ambivalence they are key sources through which to gain a critical understanding of German colonial history and its repercussions. They are persuasive illustrations of the self-understanding of the colonisers as civilisers and rulers; they open a view to individual, often contradictory rapprochements and conflicts with the indigenous societies. This shows us how necessary it is to learn to interpret the imagery of colonial photography and to reflect on it in its historical context, and to consider how these preconceived images and their stereotypes were disseminated. At the turn of the 20th century numerous postcard motifs were circulated around the world – images of idyllic retreats in the Pacific islands and of their inhabitants, but also pictures of violence against people in the colonies.

Objects from the collections are “brought to speak about themselves” in exhibitions; they are presented with questions and statements corresponding to the respective zeitgeist and woven into a narrative. In the course of collecting and exhibiting an object, many additional layers of meaning emerge in the object’s biography which we then peal away and study through further research. Our research on the history of collecting African weapons leads us, for example, to the history of exhibitions of these exponents in the East German Museum für Deutsche Geschichte (MfDG), the GDR precursor of the Deutsches Historisches Museum. Alongside knowledge of the provenance and acquisition of the object, we found information on the conceptual presentation of the weapons in that museum. Before the backdrop of the African wars of independence in the 1960s these objects served in the MfDG’s Permanent Exhibition to illustrate the aggressive character of imperialism and capitalism which had been responsible for the destruction of indigenous cultures in Africa. 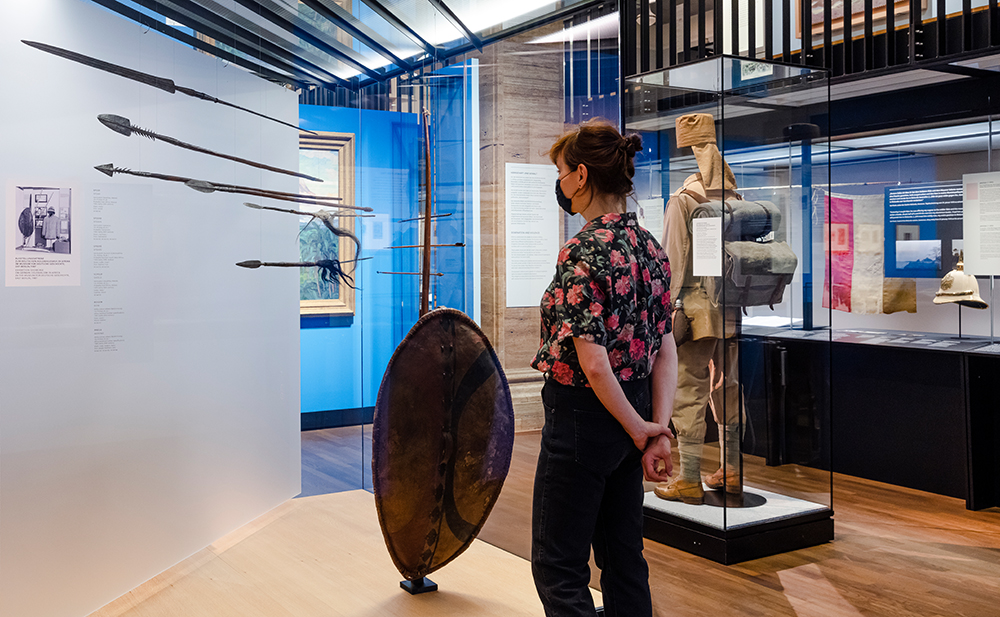 View of a selection of African weapons from the DHM collections; on the left a photograph showing the presentation of these weapons in the MfDG in the year 1987. © Deutsches Historisches Museum/David von Becker

Colonial history as a history of relationships and violence

The exhibition relates a history of manifold relationships between colonisers and members of the indigenous societies, shown in the context, for example, of missionary work or settlements. Spotlights on the practice of colonial rule show that despite the stark imbalance of power, Africans were able to participate in shaping the colonial policies between themselves and the colonisers. 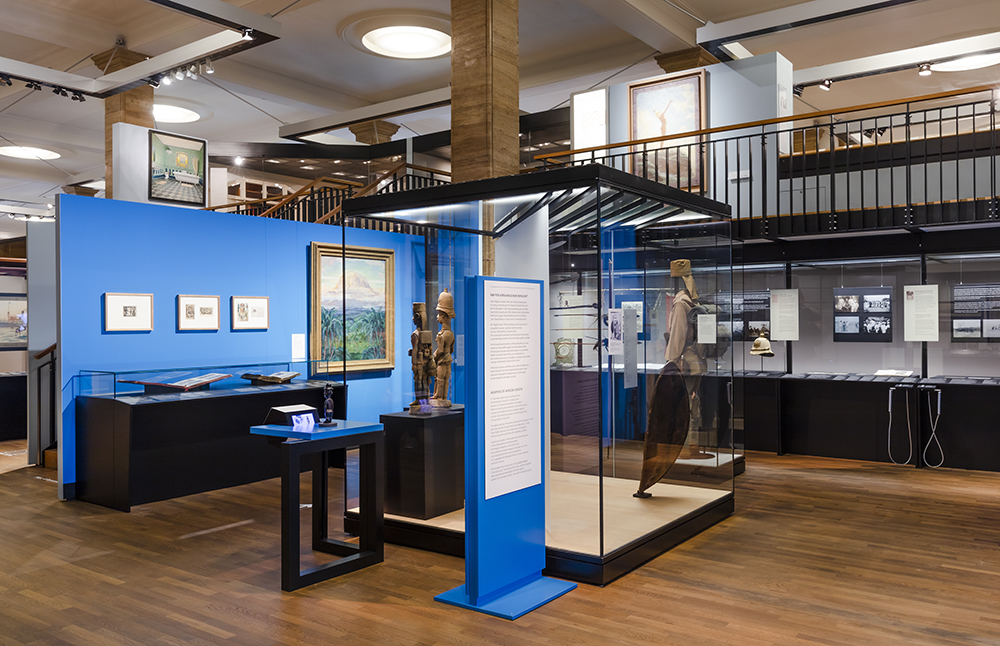 In the new exhibition sequence, indigenous men and women are visible in various ways: as cooperation partners, but also as opponents of colonial politics, as slave labourers and involuntary medical test persons, or as helpless victims of despotism and violence. Standing for African leaders are the well-known protagonists Hendrik Witbooi and Rudolf Duala Manga Bell, whose biographies are prominently represented in the exhibition. Contemporary African witnesses present their views of the historical presentation in the new exhibition sequence in audio commentaries, for instance in the context of the colonial wars.

Racism formed the fundament of German colonial rule, which could only be maintained through violence. The precondition for, and the ubiquitous practice of, Germans’ colonial policy were force and exploitation, based on the assumption that they were the bearers of “civilised” society and thus had the right to “extract the value” from the territories and to have “dominion” over them. This culminated in the colonial wars and the genocide of the Herero and Nama in the former colony of German South West Africa, now Namibia. The objects represent above all the perspectives of the colonisers; they are harrowing documents of the brutal crimes committed in German South West Africa. The impressive report of a Nama man from the former colony, who had been interned in a German concentration camp on the so-called Shark Islands, brings the perspective of the perpetrators face to face with the view of a victim who was directly involved.

How do we want to deal in future with German colonial history and its material remains in a museum of history like the Deutsches Historisches Museum? The remembrance of the German colonial era must constantly be debated anew in German society and displayed in museums in a new way. It is essential to revise the discussion of the material culture of colonialism not only in the public space with monuments and street names, but particularly in the museum collections, to call it into question and to carry on the conversation from different perspectives. The knowledge thus gained will act as an important signpost for the presentation of German colonialism in the upcoming revised Permanent Exhibition in the Deutsches Historisches Museum.