A Home for the Germans in Paris

The portrait of Alexander von Humboldt for Auguste and Sophie Léo

The Deutsches Historisches Museum (DHM) recently acquired a portrait of Alexander von Humboldt that had been painted around 1835 during his stay in Paris. It represents a private testimony to his friendship with the family of the banker Auguste Léo. Dr Sabine Beneke, head of the DHM Art Collection, describes the painting and the context in which it came about.

The portrait of the researcher, explorer and polymath Alexander von Humboldt (1769 – Berlin – 1859) which the DHM has recently acquired had been in Paris for around 185 years. The portrait, 72 x 58 cm in size, was painted around 1835 as a private testimony to Humboldt’s friendship with the family of the banker Auguste Léo. It shows Humboldt without medals or decorations and without objects referring to his public life as a researcher and scholar. The painter, Henri (Karl Rudolf Heinrich) Lehmann lights up the face with skilful artistry. Humboldt looks out at the observer attentively, openly, affably. Lehmann, born in Kiel in 1815, was a nephew of the banker’s wife, Sophie-Augustine, and had become a student of the important painter Jean-Auguste-Dominique Ingres in Paris in 1831. 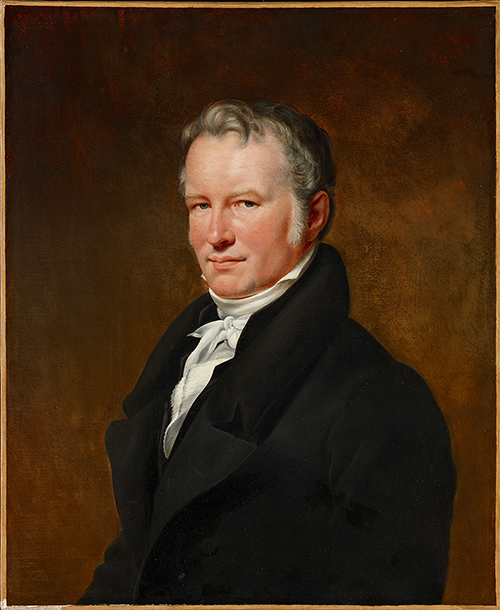 In the mid-1830s, Humboldt had already been living in Paris off and on for more than two decades and had just completed his multi-volume travelogue through the Americas. The ethnic German couple Léo had received him as a guest and then as a friend in their salon in Rue de la Chaussée d’Antin in the IX Arrondissement. The salon was frequented by well-known musicians, writers and artists. And yet the Léos also offered a cultural and emotional home away from home for less famous German compatriots. Shortly after the portrait was painted and installed in an evidently prominent, visible place in the Léo household, the banker temporarily ran into financial difficulties and left Paris. The poet Heinrich Heine (Düsseldorf 1797 – 1856 Paris) reported from exile in Paris:

“There are also patriotic grounds which make it desirable t0 preserve poor Leo. Hurt feelings and great losses have forced, as I hear, the once so wealthy man to leave this very expensive Paris and to retire to the countryside. […] That would be a great loss for the German compatriots, for all the second- and third-class travellers who came here to Paris found in M. Leo’s home of a friendly reception, and many who had experienced an uneasiness in the frosty world of the French could flee there with their German hearts and feel at home again in their like-minded sensibilities. On cold winter evenings they found there a warm cup of tea, prepared somewhat homoeopathically, but not without a bit of sugar. They would see here Herr von Humboldt, hanging there on the wall in effigy, like a decoy. […] There, too, were the propitious sounds of the mother tongue, in fact of the grandmother tongue, that greeted the Germans here. Here the dialect of the Hamburg “Dreckwall” was spoken most purely, and anyone who harkened to its classic sounds would feel himself transported to the oders of the Mönckedamm alleyways. But indeed, when Beethoven’s “Adelaide” was sung, there flowed the most sentimental tears! Yes, the house was an oasis, a very beastly oasis of German congeniality in the desert sands of the French world of Reason, a tabernacle of the most intimate gossip, where people chattered away like they do on the banks of the Main, where people prattled like in the districts of the sacred city of Cologne, where a refreshing little glass of beer often accompanied the gossip from the fatherland – German heart, what more couldst thou desire? It would be a crying shame if this gossip parlour would be closed.”

After Hamburg and Berlin, Paris of the 19th century was the third German metropolis, as it were. Until the outbreak of the Franco-Prussian War in 1870, the number of German-speaking migrants in the French capital rose to almost 80,000. At the time the portrait was painted, the rapidly growing population of Paris had reached around 900,000 inhabitants. Most of the Germans in Paris tried to earn a living as street sweepers, rag pickers, canal workers, construction and factory workers, maids, carpenters, cabinetmakers, tailors and shoemakers. History, however, remembers primarily the much smaller group of intellectuals, artists and wealthy emigrants as well as the political refugees from Germany. For Alexander von Humboldt, France was his “second fatherland”. Like almost no other contemporary, Humboldt embodied the interlacing of German and French culture and science.