Claartje van Haaften is a conservator for plastics at the Deutsches Historisches Museum (DHM). She is in charge of dismantling the “Glass Man”, a figure that is as fragile as it sounds, but which despite its name is not made of glass. This article is about dealing with this difficult object in the course of de-installing the Permanent Exhibition.

My position as a conservator for the care and conservation of all objects made of plastic in our collection started in October 2020. The special objects that are made of synthetic materials are now assigned to their own specialised field in the DHM, alongside the departments of wood, book, poster, paper, glass and ceramics, textile, metal, and painting. One of the conservators’ tasks is to develop scientifically based, sustainable concepts for the conservation and restoration of the objects in the collection and to implement these concepts in collaboration with the museum’s collection curators, technicians and other colleagues. 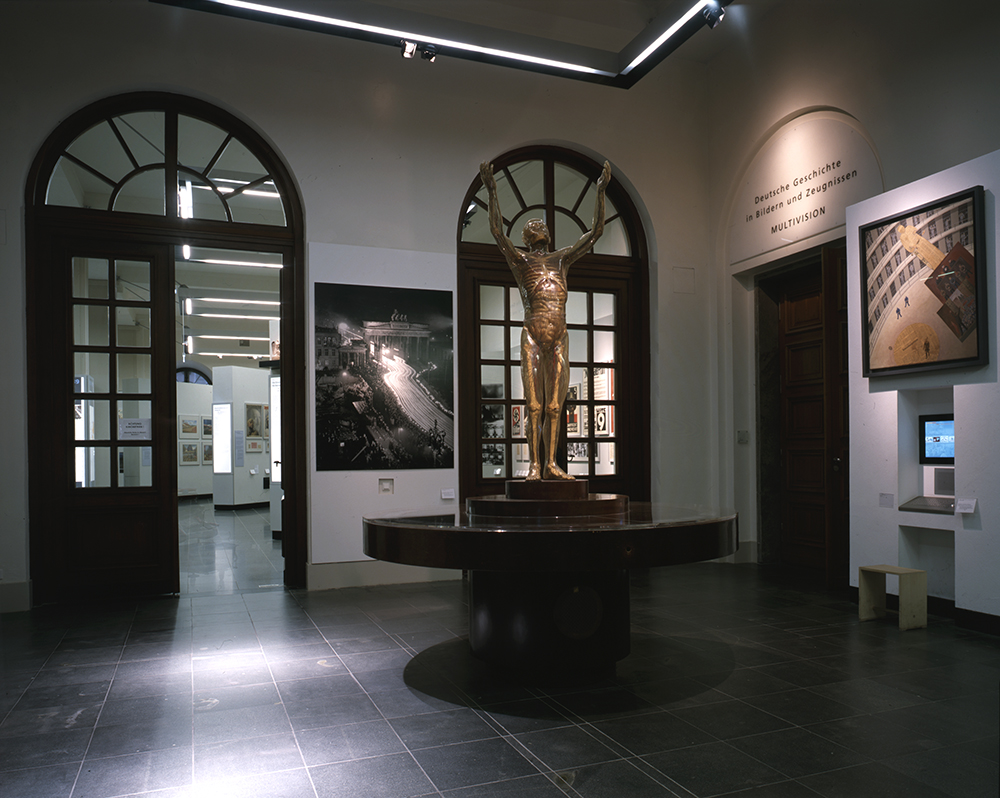 In the case of the “Glass Man”, an icon of our collections, I was able to refer to the highly topical outcome of a research project at the German Hygiene Museum in Dresden (DHMD) from 2016 to 2020. In 2017, the research team also examined the “Glass Man”, which has been on display in the DHM’s permanent exhibition since 2006. The glass figures in the study are exemplary reconstructions of skeletons showing the internal organs and blood vessels. With the transparent plastic called Cellon (chemical name: cellulose acetate), which represents the skin, the interior of the figures is visible. In this way, observers get a three-dimensional view of the body. In the DHM exhibition, the figure was presented on its original wooden pedestal from the year 1935. The electrical system for lighting up the internal organs, which had been partly repaired at a later time, was not in operation.

Our “Glass Man” was the third figure produced in Franz Tschakert’s model workshop in the German Hygiene Museum. A prototype had been previously developed in 1927. The second International Hygiene Exhibition in Dresden in 1930-31 provided the occasion for the presentation of the “Glass Man” in public for the first time. In 1933, the Buffalo Museum of Science in the USA had ordered a special production of the figure – interestingly enough, without genitals. In 1989, this object came to Germany as part of the DHM collection. A “Glass Woman” produced around the same time had already been donated to the DHM in 1988 from the collection of the Museum of Science and Natural History of St. Louis. This figure is now displayed in the German Hygiene Museum in Dresden as a permanent loan from the DHM. In the framework of the research project in the DHMD, various figures were compared and their condition documented. The project included two “Glass Men” from 1935 and 1962, a “Glass Cow” from 1983, and the torso of a pregnant “Glass Woman” from 1985. The researchers studied the history of the origin and the production method of the different figures. The research report states: “For the Glass Woman and the Glass Man of the Deutsches Historisches Museum Berlin, together with the Glass Man of the German Hygiene Museum from 1935, there is the unique opportunity of studying three figures from the same period of production over decades. This offers the possibility to compare glass figures of nearly the same age with regard to their respective object history and ageing phenomena and to draw conclusions about the ageing mechanisms.” Moreover, these findings, in turn, contribute to the development of treatment methods and preventive measures for conservation, known as active and passive conservation.

A special role was attributed to the plastic that makes up the transparent external skin, cellulose acetate. It is characterised first of all by its outstanding workability, pliability and transparency. Its ageing, however, involves negative processes. Additives to the chemical composition migrate out of the material and make it shrink and become brittle. Acetic acid off-gases as a reaction product, which then induces further damage in a chain reaction. In the end, a discolouration appears, and the deformation creates flaws and fissures in the plastic. 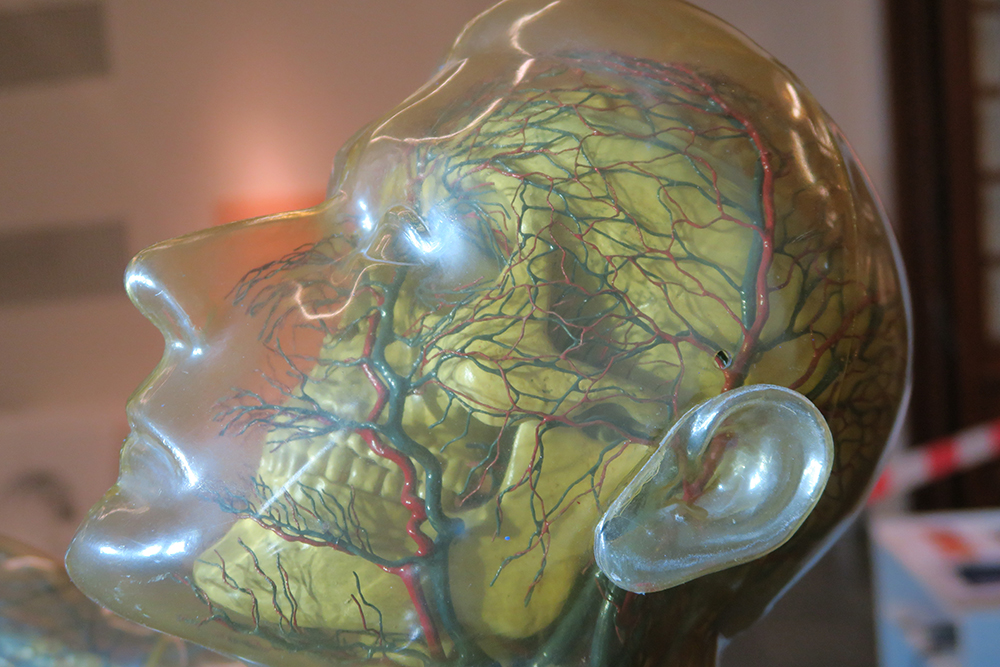 A detailed shot of the “Glass Man” for documentation © DHM

Despite previous measures to stabilise the DHM figure, these objects remain extremely fragile, and the processes of deterioration cannot be stopped. However, by employing optimal exhibition conditions the decomposition of the materials can be slowed down. These measures include air-conditioned and ventilated showcases with low light levels, low humidity, as few transports as possible, and protecting the object from being touched. During the unavoidable transport of the “Glass Man” from the Zeughaus to the depot in the course of de-installing the Permanent Exhibition, optimal packing and transportation measures must be undertaken to keep the risks at an absolute minimum in order to avert additional damage to the object. 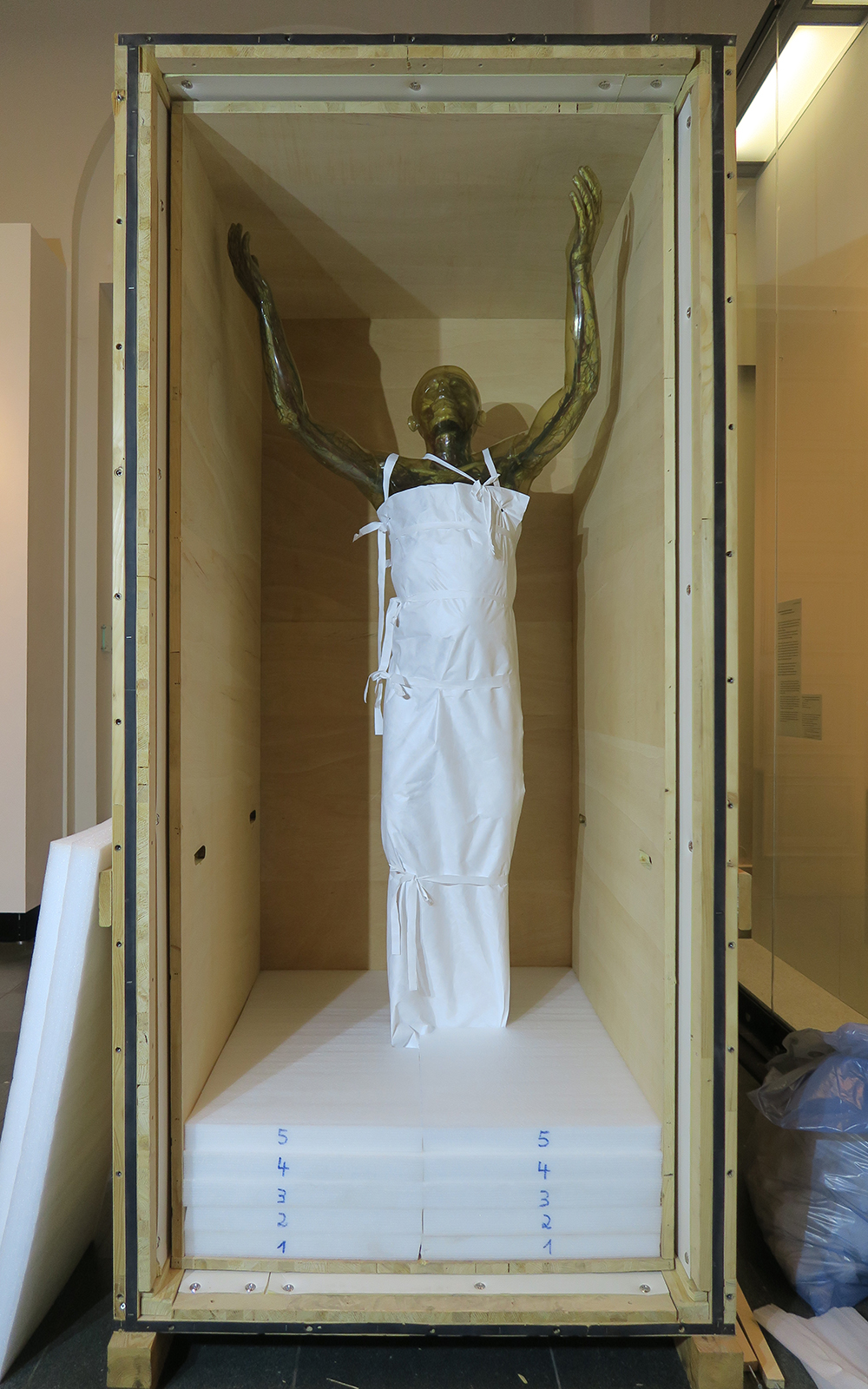 The “Glass Man” was properly prepared for the transport © DHM