The Zeughaus, the Deutsches Historisches Museum’s main building, is currently closed for renovation and the permanent exhibition “German History from the Middle Ages to the Fall of the Berlin Wall” is being carefully dismantled and put into storage. At the same time, the DHM is busy working on plans for a new Permanent Exhibition – a major project affecting all departments across the museum. In our interview series “5 Questions for…”, we give museum curators and staff the chance to talk about their personal memories of the last permanent exhibition and what they are working on now. Kicking off the series is this interview with Dr. Stephanie Neuner, chief curator of the permanent exhibition.

Ms. Neuner, the permanent exhibition shut in late June. Was there a particular object in the exhibition that had a special significance for you from the viewpoint of curator?

Stephanie Neuner: Yes, a selection of objects on the upper floor in the Biedermeier display especially stand out in my mind. On view were three dolls dating from the mid-1800s. It wasn’t until a few years ago that I remember taking a proper, conscious look at the dolls for the first time, because at the time I was working on the subject of poor relief and alms-giving in the 1800s. My work had taken me to Göttingen, to the municipal archives, where I came across the report of a guardian from the local chapter of a middle-class women’s association, who paid a visit to a family living in abject poverty. The family were part of the working poor and were engaged in the cottage industry. The guardian’s report painted a domestic scene in which parents and children made dolls for the local doll factory to make ends meet. Suddenly I had a picture of the kind of people who had made the dolls in our display – or at least dolls like them – and the conditions they laboured in. Thanks to what I’d learned, I was able to anchor the dolls more deeply in their social-historical context and shed light on an important aspect that had perhaps been otherwise overlooked.
After reading the historical sources of the dismal conditions and pay of poor families doing piecework at home, the following thought started to take shape in my mind: Poor children were employed in the cottage industry and laboured alongside their siblings and parents to manufacture a product that was actually intended as a playful diversion for children in wealthy families. You only have to look at the global production of consumer goods to see that this phenomenon is still current today.
The dolls were on view in the permanent exhibition as part of the display on “the discovery of childhood” in the 19th century. Looking at them, one would have no idea of the conditions underlying their production. Objects by themselves do not reveal all that’s worth knowing about their history, origin, production, uses, and meaning. It is therefore essential that curators bring such underlying contexts to the surface and make them visible to visitors.

You have been working at the DHM as curator of the permanent exhibition since 2019. Was any section overhauled during that time in a way that particularly stands out in your mind?

The revised section on German colonial history 1880 to 1914 opened in June 2020. In preparing for the new display, I spent ages poring over photographs, photo albums, souvenirs, and postcards in the DHM’s collection. It took a lot of time getting the selection for the new display right – framing our choices and providing adequate contextualization. Colonial-era images in the museum’s holdings made by settlers, missionaries and their families, as well as soldiers in the so-called Kaiserliche Schutztruppe, or Imperial Protectorate Force, document everyday life, but most of all they show how these people saw themselves in the role of colonizer and how they viewed the people they were colonizing. These viewpoints are anything but clear-cut and are laden with sexism and racism. But many of the images also show an individual’s attempt at making contact, an interlocking history between colonizer and colonized, in a power dynamic that is always asymmetrical. More research is needed to trace such nuances further. I liked the fact that this new exhibition chapter required us to reach out to other museum staff, scholars, and students. In this way, the overhaul of the exhibition chapter served as a prelude to further curatorial engagement and discussion on the topic of colonialism and its representation at the DHM. 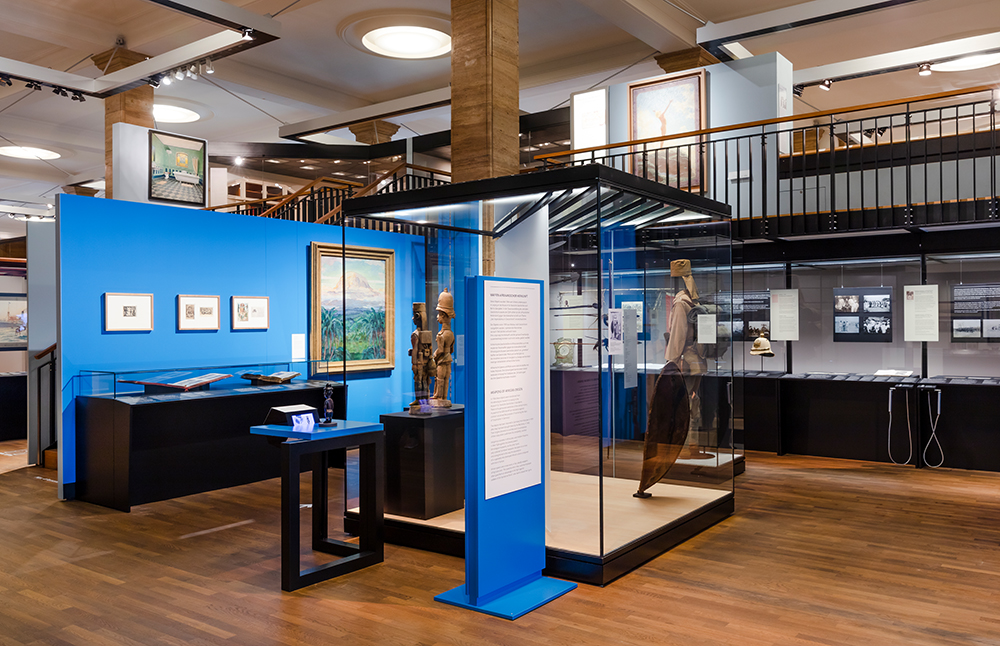 What was the biggest surprise for you while dismantling the permanent exhibition?

The displays are being demounted section by section and the successive dismantling gives you a chance to suddenly see individual exhibits on their own as stand-alone pieces. They no longer crowd in on you and vie for attention. That means they have more space to breathe than before and you can really concentrate on and think about each one.

In addition, the move made it obvious that museum objects are, throughout their object lives, mobile: they wander from one place to the next. They leave their place of origin and pass through various hands before finally arriving in the museum, where they first land in storage, then resurface in an exhibition before going back into storage again. They get stripped of their original production contexts and original uses, and take on a new meaning as display objects in exhibitions. With the dismantling of the permanent exhibition and the move into storage, the objects are now also relinquishing the narrative framework assigned them by the permanent exhibition of 2006.

In a few weeks, the Zeughaus will be an empty space without objects. Since the late 19th century, objects have been on show here under different ideological premises and each time with a very different spin on history: first in the Prussian Military Museum, then the Museum of German History of the GDR, and now in today’s Deutsches Historisches Museum. I think the unique history of this building underlines the task of making the construction of historical narratives clear to visitors, especially as regards the new permanent exhibition. For us as curators, this also means making considered choices in linking objects with statements about the past and also presenting them in such a way that highlights their historical place within the collection and their display history at the Zeughaus itself.

Could you give us an idea of the scale of the collection display? How many objects were in the exhibition and how was it structured?

The display featured around 6000 objects, spread over two floors and 8000 m² of exhibition space.
In the classical mould of the history exhibition, it was arranged chronologically and, in nine chapters or sections, presented the history of Germany from the Middle Ages to the fall of the Berlin Wall in 1989.

Are there any ideas that you would also like to take up or pursue in the new permanent exhibition?

In many of the section displays, the emphasis will shift to new perspectives and new angles on a period of history, while the overall structure will also change significantly. For example, in addition to a chronological presentation, there will be thematic rooms that approach basic questions of German history from a diachronic perspective. We’re also planning on creating a separate children’s and family area. There will be many “familiar faces” – with numerous objects from the dismantled permanent exhibition destined to go on view again. But we’re still undecided on which previously displayed objects to include in the future display. That will still need to be thrashed out in the later planning stages.