A slender, sickly, downcast boy with an injured arm sits before a bleak background looking out of the picture with large, tired eyes, a boy who has experienced everything but a happy childhood. The painting “Starving Proletarian Boy” from the year 1928 by the German-Jewish artist Lea Grundig (1906 – 1977, formerly Lea Langer) is part of our exhibition Weimar: The Essence and Value of Democracy and illustrates the often oppressive fate of proletarians in the Weimar Republic. During the preparation of the exhibition an exciting discovery was made in the course of a routine examination, a discovery that sheds an intensive light on the context of poverty, illness and death in which the picture came about. Ulrike Hügle, restorer in the Deutsches Historisches Museum’s Painting Restoration department, and Dr. Simone Erpel, the exhibition’s curator, report about this impressive find. 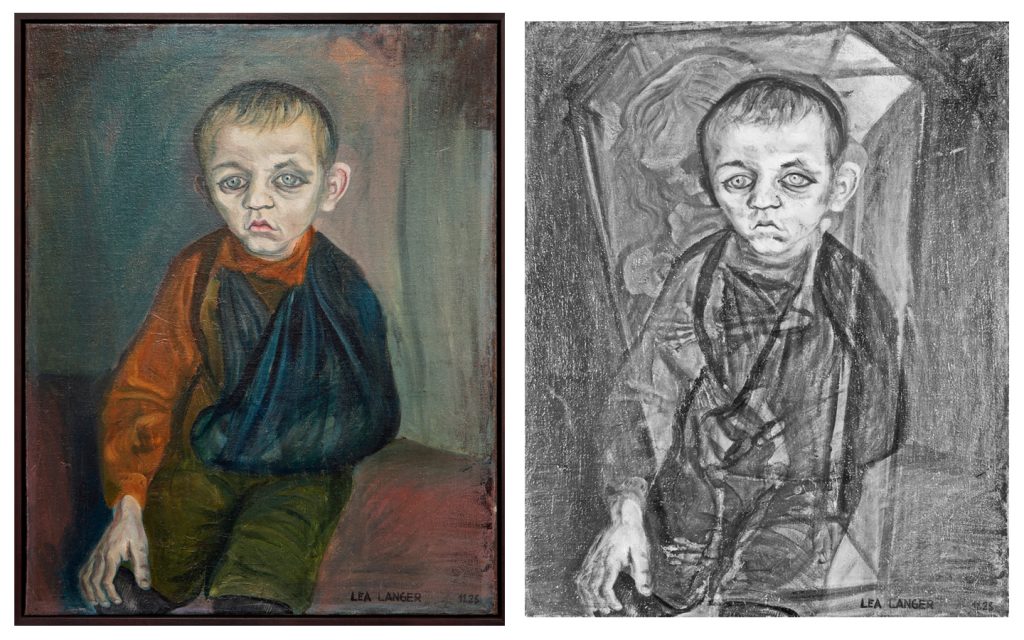 In order to record the condition of the objects in an exhibition they are always thoroughly examined before being displayed. So it was with this work by Lea Grundig. One method of examination is the so-called infrared reflectography. The respective picture is exposed to Infrared light of a certain wavelength. The light rays penetrate the paint and can recognise how the painting was technically put together layer upon layer; one can see, for example, if there is a draft drawing on the primer coat. The infrared camera then transfers the image digitally to a computer system using a special program and projects it onto the monitor. In this way it reveals later changes, overpainting and even damage, all of which is important for preserving the work.

But this look under the paint surface lets us see not only damage and retouching, but also the original plans and work processes that went into making the painting, which would otherwise remain hidden. In the case of the “Starving Proletarian Boy” the infrared photo shows us that a very different picture is hidden beneath the visible painting. It most likely shows the corpse of a child apparently comforted by its favourite doll in the coffin. 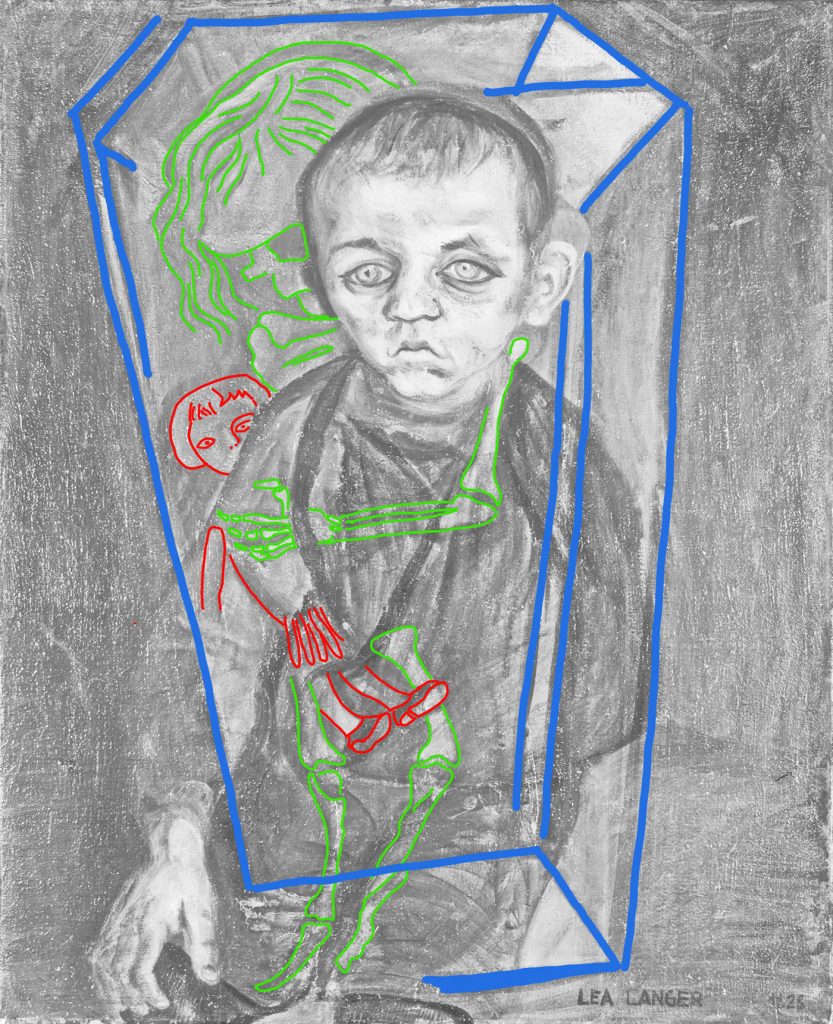 Not uncommon for the artist is the motif of people dying or dead people. Research turned up an etching by Lea Grundig from the year 1935 that shows the skeleton-like emaciated body of a dying child: a depiction that resembles the motif revealed by the infrared camera. 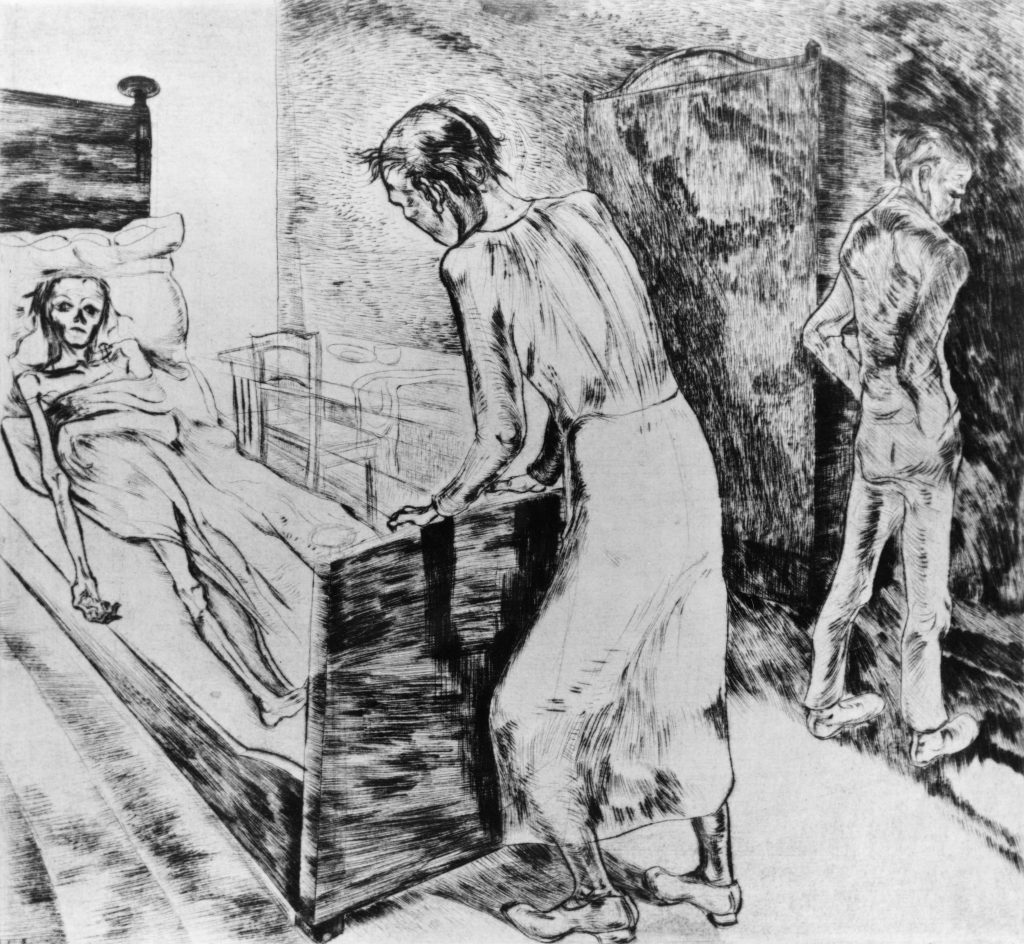 One can only speculate why the artist painted the representation of the starving boy over the original harrowing coffin motif. Perhaps she wasn’t satisfied with the result of her original work. On the other hand, she might have painted it over for financial reasons in times when material was scarce, a common practice. When we take Lea Grundig’s living conditions into account, this could be a plausible explanation. Born in Dresden in 1906, the painter and graphic artist became a staunch communist and distanced herself from her “capitalist” family at an early age. Her father was an orthodox Jew who had emigrated from Ukraine and worked as a clothing and furniture merchant. Her mother was liberal and interested in the arts. Lea left her parental home at the age of 18 and studied at the Dresden School of Arts and Crafts and then at the Academy of the Fine Arts in Dresden. There she met the man she later married, Hans Grundig (1901–1958). In 1926 they both joined the Communist Party of Germany (KPD). They married in 1928. The couple lived – as one might say today – in precarious economic circumstances.[1]

With these words the artist Lea Grundig characterised in retrospect her works from the 1920s and 1930s. In 1930, together with Otto Griebel (1895–1972) and Hans Grundig, she was among the founding members of the Association of Revolutionary Visual Artists of Germany, known as “Asso” for short, a Dresden regional group that espoused the cause of actively engaged leftist art during the Weimar Republic.[3] The Asso was closely associated with the KPD. The principal task of artists, they believed, was to develop effective visual agitation for the KPD party line. According to the art historian Eckhart Gillen, the ideological impact of the works of Lea Grundig and other Asso artists lies in the realistic and very precise way they recorded the conditions of the times.[4] The “Starving Proletarian Boy” should therefore be understood as a silent indictment of the social misery of the proletarian classes. A silent indictment that is alarmingly reinforced by the discovery of the hidden image of a dead person in a coffin.

The exhibition Weimar: The Essence and Value of Democracy is running until 22 September 2019 in the PEI building of the Deutsches Historisches Museum.