Seventy years ago, on 1 March 1948, the “Bank der deutschen Länder” (Bank of the German States) was founded in Frankfurt. It was tasked with regulating monetary policy in the western zones of occupation. Dr. Michael Kunzel, head of the numismatic collection at the Deutsches Historisches Museum, looks back at the measures leading up to currency reform in the occupied zones, which preceded the division of Germany.

In the permanent exhibition’s section on the Cold War and currency reform, visitors can see bank notes and a transport box. These came to the DHM collection as a donation from Bad Homburg in 1992. Containing banknotes printed in the USA for issue in Germany, a total of 23,000 of these wooden boxes (of which only three survive) were transported from October 1947 across the Atlantic as part of a top-secret operation codenamed “Bird Dog”. Unloaded at the port of Bremerhaven, the boxes were then dispatched by trucks to the old Reichsbank in Frankfurt. They were stored there until 20 June 1948, the day on which the currency reform took place in the three western zones. 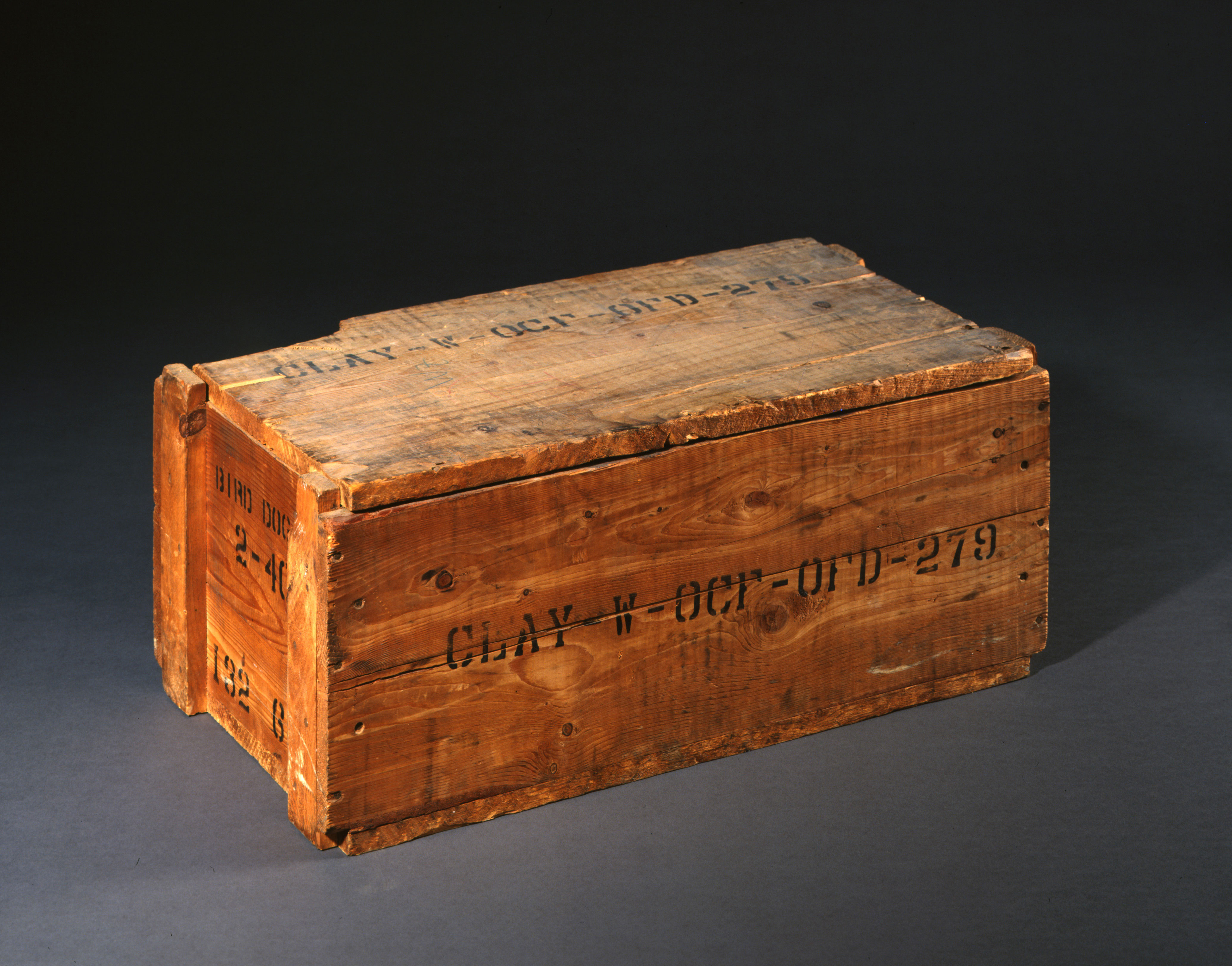 Transport box for bank notes of the currency reform in the western zones of Germany, 1948 © DHM

Amid Germany’s crippled economic and financial system, the “Reichsmark” (the country’s existing currency) experienced considerable devaluation. The black market was flourishing, and cigarettes became a recognized means of exchange. Before long, the occupying powers all agreed the only way to beat the supply crisis was through currency reform. The banking system had recently been decentralized:  there had been no German central bank since 1945, the occupying powers having established their own central state banks (“Landbänke”). The Soviet Union had already embarked on nationalizing its zone’s economy, which was restructured in line with communist principles. Plans for a currency reform for the whole of Germany had first been devised in 1946. However, the Allies disagreed on the issue of a central German financial authority. Since the currency reform and distribution of new money required a central bank, the Allies created centres to oversee their federalized banking system. In the western occupied zones, Great Britain’s venerable “Bank of England” eventually served as the model for the “Bank deutscher Länder”, established on 1 March 1948 with its headquarters in Frankfurt. The Soviet Union set up a counterpart for its own occupation zone, the “Deutsche Emissions- und Girobank” (“German Issue and Giro Bank”), in May 1948. 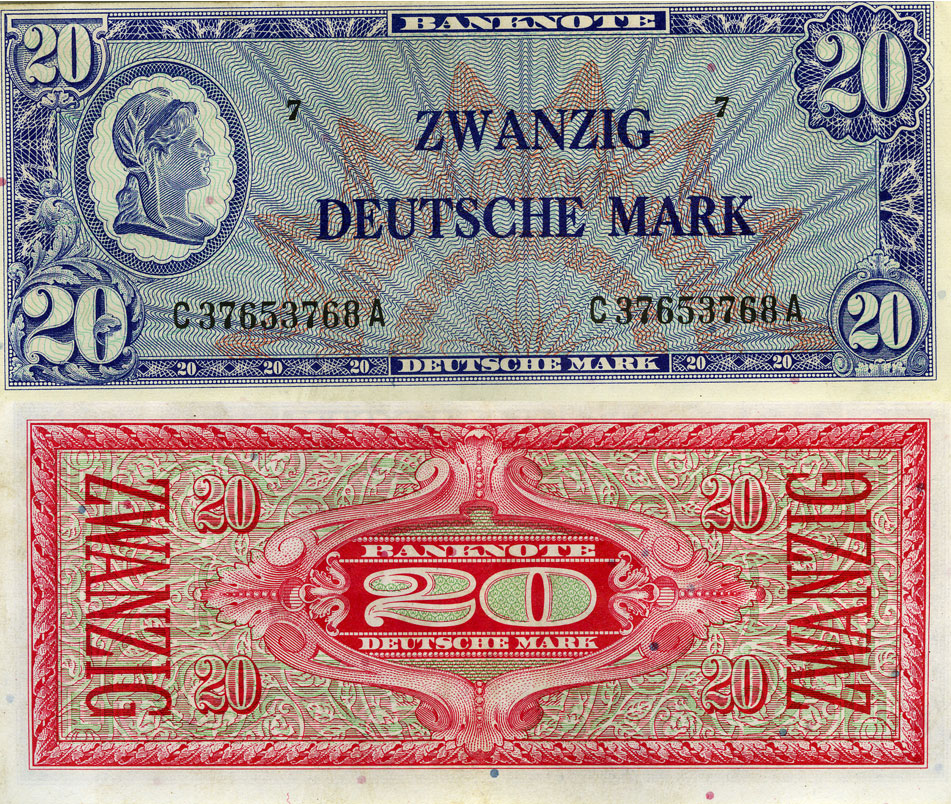 From the Currency Reform to the Berlin Blockade

On 20 June 1948, codenamed “Day X” in secret plans for the introduction of the new currency, 500 tons of banknotes were distributed in the western zones. Each person was entitled to 60 deutschmarks (DM). Recipients received 40 DM straightaway, with the remainder paid at a later date. The change in currency was far-reaching, with 93.5 percent of the old currency having vanished from circulation. At first, people referred scornfully to the new banknotes as “Mickey Mouse Marks” because of their rudimentary style of print. No one then could have foreseen that the new “D-Mark” would eventually become one of the world’s most stable currencies. As not enough coinage was available in 1948, the “Bank deutscher Länder” initially printed five and ten-pfennig banknotes. Denominations of five to one hundred D-Marks were subsequently issued, which remained in circulation until 1966. 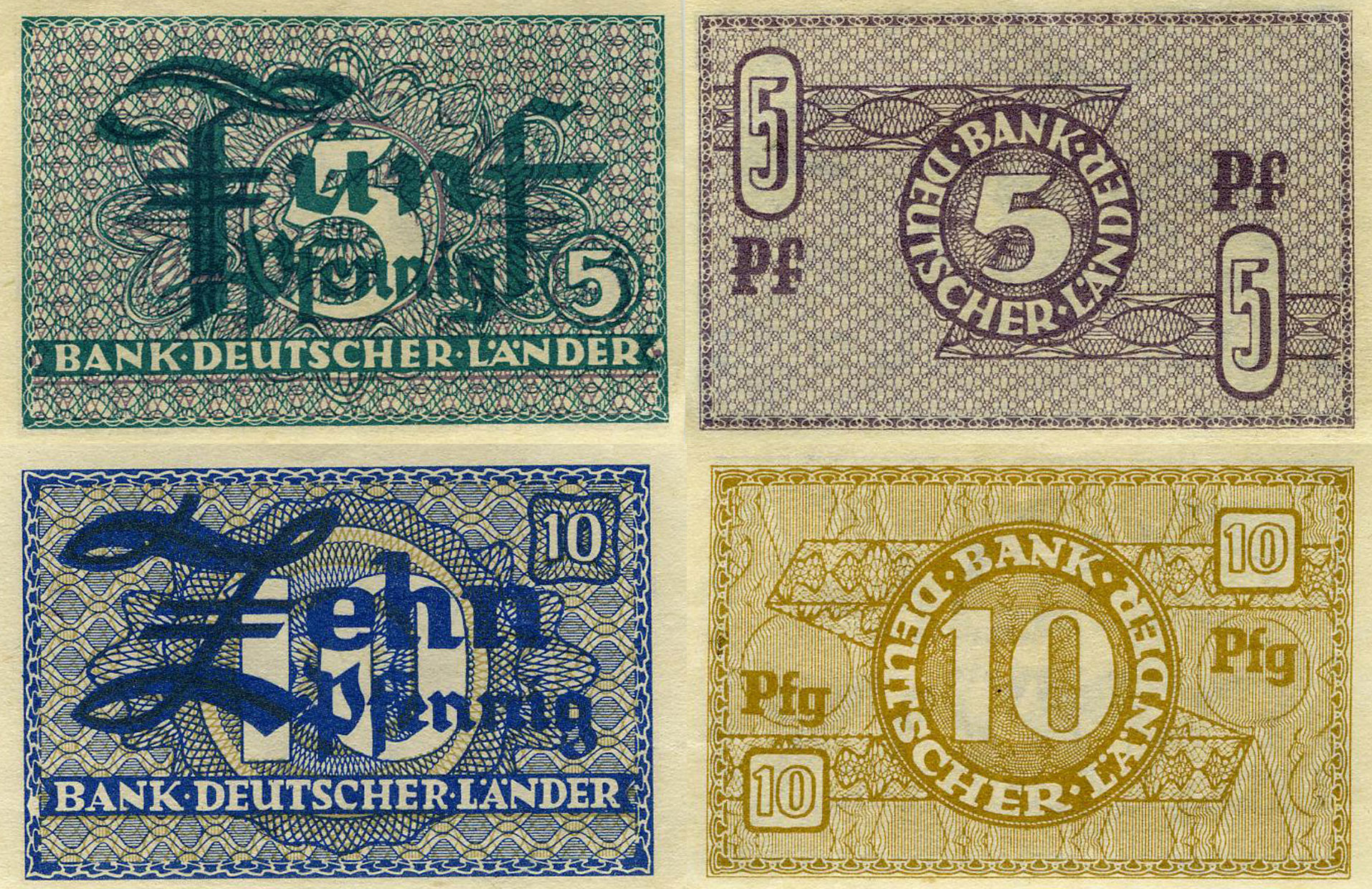 The Soviet Union responded on 24 June by introducing its own currency reform and revaluing existing money in their occupation zone. Since the new banknotes would not be ready for several weeks, people initially had to make do with hurriedly printed vouchers. Stuck like stamps onto existing banknotes, they effectively revalued the old “Reichsmark” and “Rentenmark” (the currency issued to combat the hyperinflation of the early 1920s). It was known disparagingly as the “Tapeten-Mark” (“wallpaper mark”). Now Germany had two currencies with the same name: the “Deutsche Mark”. 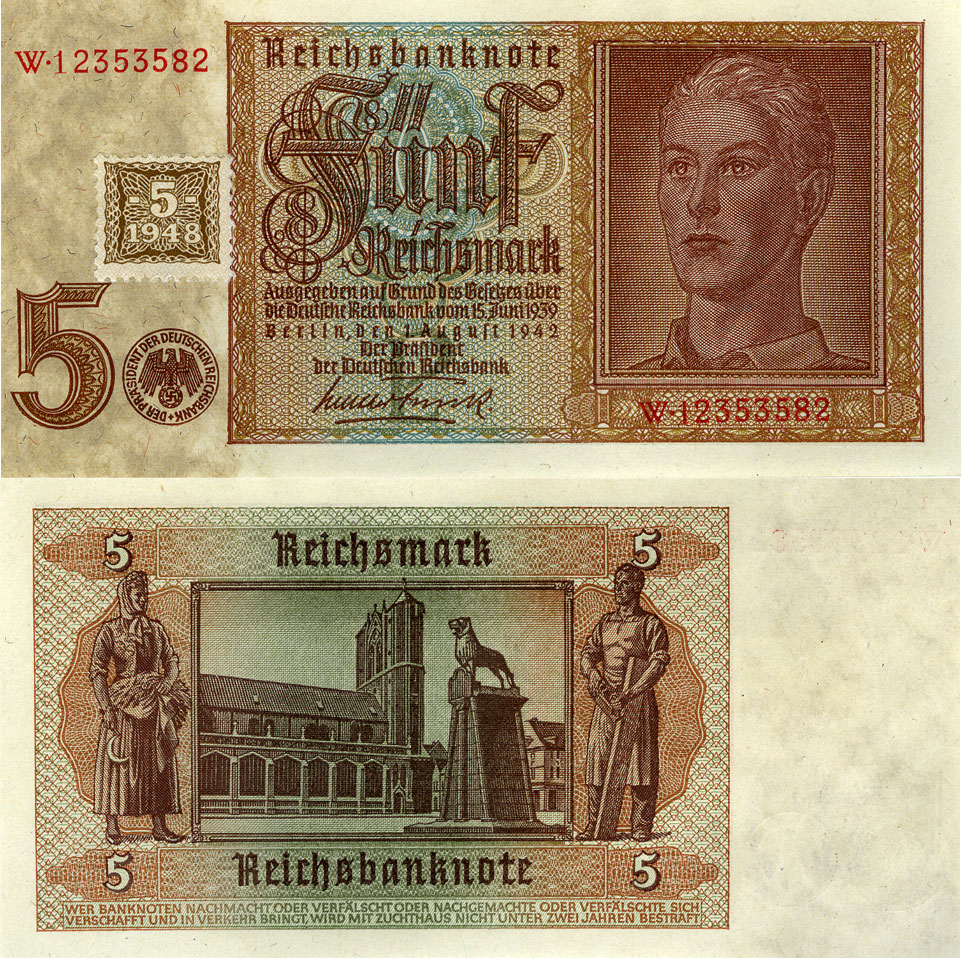 When the Soviets rolled out their currency reform to include the whole of Berlin, the Western Allies responded by introducing their own “D-Mark” into the three western sectors of the city. The currency dispute escalated and the Soviets blockaded Berlin. Ultimately, the Western Allies were able to maintain supplies to West Berlin by means of an airlift, over the course of which a transport airplane landed in the city every 90 seconds. The blockade, which lasted until May 1949, not only cemented the division of currencies. It also heralded the division of Germany