Revolutions typically occur amid fighting and violence, triggered and propelled by events that are almost always excessive and eruptive in nature. However, as we can tell from written commentaries of the time, even contemporary observers were surprised at the bloodless nature of the events that gripped the German Empire in November 1918, especially when they compared them to the revolution of 1917 in Russia – then at the forefront of everyone’s mind – or the French Revolution of 1789. For, despite occasional armed clashes, this wave of social and political upheavals was essentially free of almost any violence. Having dominated Germany for nearly 50 years (and Prussia for more than five centuries) the rule of the Hohenzollern dynasty collapsed and vanished amid a scene of almost unimaginable calm – heralded by the abdication of Kaiser Wilhelm II and his subsequent flight into exile in the Netherlands. The symbol of this revolution was not terror, but rather the distinctly un-revolutionary cockades and epaulettes worn by officers of the Kaiser’s armed forces – as Thomas Jander, head of the Documents Collection, explains: 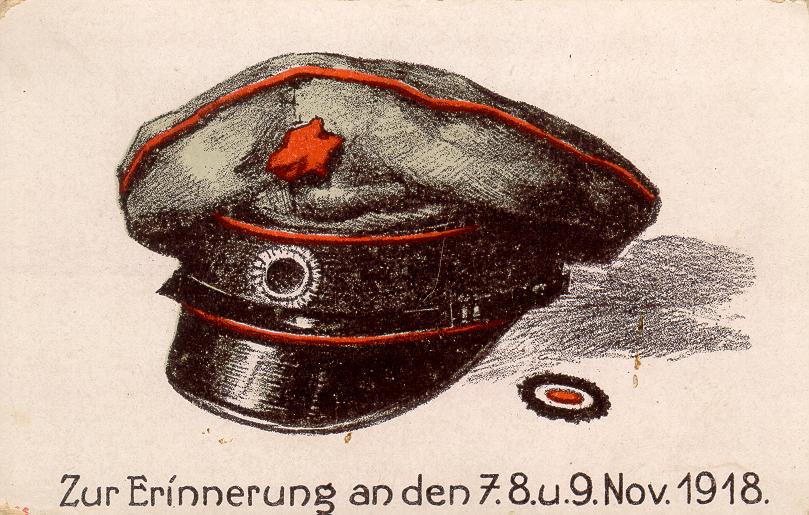 In the autumn of 1918, the German Empire was emerging from an all-consuming war. Exhausted and battle-weary, German troops were outmatched both numerically and materially by its opponents. By 1 October at the latest, (nearly) all the main German political and military figures in decision-making positions realized that the battle was lost. None of the front lines could be held in their current positions. Erich Ludendorff, quartermaster general of the 3rd Supreme Command, conveyed this information bluntly to the chancellor, Georg von Hertling, while refusing to accept any responsibility for the catastrophic situation. Indeed, Ludendorff put the blame squarely on the shoulders of the very people he wanted to hold responsible: the (social) democrats, whose task was now to clear up the heap of ashes left behind by Germany’s military leaders and, donning the role of scapegoats, sue for peace. In later years, this role proved to be a heavy burden for Germany’s democratic politicians, when their actions were retold in distorted form as the stab-in-the-back myth .

Events then proceeded rather quickly. Far-reaching reforms of the country were announced in a decree issued in October 1918: a parliamentary system was to be introduced and a new government installed. Under the leadership of the new chancellor, Prince Max von Baden, Social Democrats would for the first time in German history be promoted to government offices. Ludendorff (though not Hindenburg) was to be relieved of his position. Constitutional reforms were also announced. At the same time, a total of three diplomatic notes and replies were exchanged with the United States, with a view to agreeing a ceasefire. However, it was now too late to save the imperial throne, since the president of the United States, Woodrow Wilson, had expressly insisted on the abolition of Germany’s monarchy.

However, ultimately a more serious concern was that a portion of the German armed forces had mutinied: the Imperial Navy or, more exactly, naval command. Docked in the ports of Kiel and Wilhelmshaven, the High Seas Fleet was the pride and joy of the Kaiser and his admiralty. Up to this point in the war, the fleet’s sole show of might had been at the Battle of Jutland in 1916 (though without scoring any decisive successes). Now it was to embark on a final ‘honourable’ battle with the British Grand Fleet – and likely be sunk in the process. On 29 October 1918 – in the midst of ongoing ceasefire negotiations – the order was given for the fleet to set sail. However, neither the German government nor the Kaiser were informed of the order. This was in outright contravention of an imperial decree stipulating that all military decisions ‘[be] made in agreement with the chancellor or his appointed representative’. Hence the naval command’s order was nothing less than insubordination at the very highest level, which at the same time marked a step towards collective self-sacrifice. 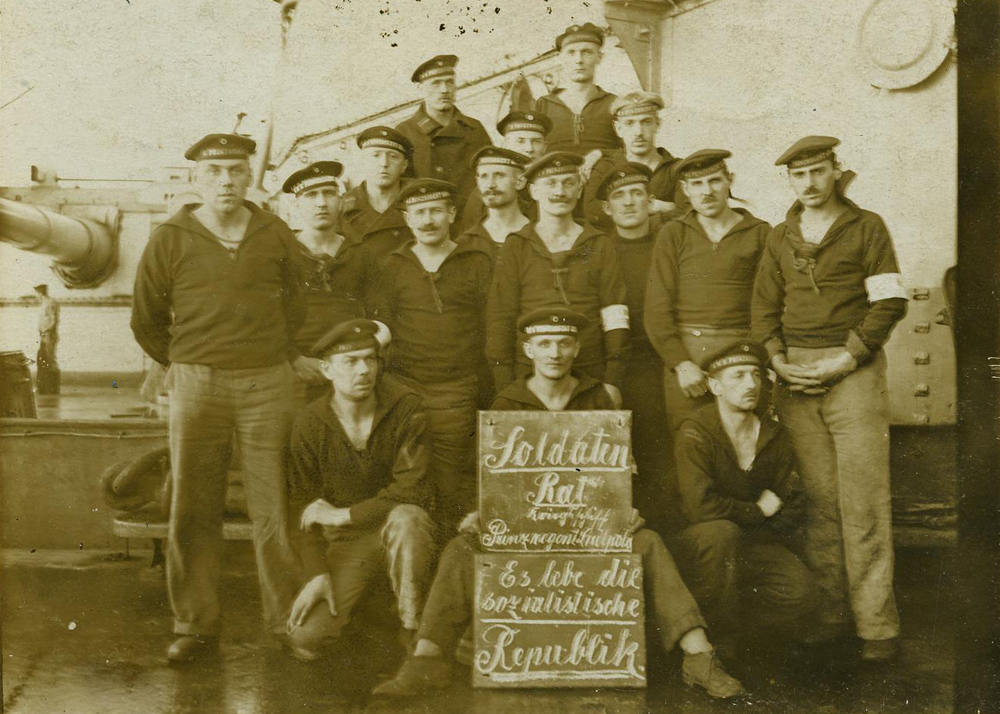 Yet despite attempts by the military to hush up the incident, it was impossible to conceal the truth from the fleet’s crews. The result: orders were disobeyed, boilers extinguished, machine rooms’ lighting systems destroyed, and red flags raised. The sailors were not bound by the naval officers’ code of honour and felt no compulsion to die at the end of a war that was quite clearly already lost. Without the sailors, there was no battle to be fought. The men revolted against officers, formed soldiers’ soviets, took up arms, and protested alongside workers in Kiel. After just six days and a few fairly minor armed conflicts (resulting in only a comparatively small number of deaths), the insurgents managed to turn power structures upside down. The revolution in the coastal cities now spread throughout the entire country: on 7 November, a soviet republic was declared in Munich, all the way in the south. One day earlier, a workers’ and soldiers’ soviet had assumed power in Bremen.

Meanwhile in Berlin, the chancellor tried persuade the leadership of the (M)SPD to ‘contain’ the revolution. In contrast to the USPD (the Social Democrats’ more revolutionary splinter group) the ‘majority’ SPD supported parliamentary democracy; its leader and parliamentary chairman, Friedrich Ebert, proved to be a reliable partner for the chancellor. It was clear that there could be no peace while Kaiser Wilhelm II remained on the throne. Since the Kaiser could not yet bring himself to bow to the inevitable, Chancellor Max von Baden unilaterally announced Wilhelm II’s abdication (the former Hohenzollern monarch countersigned the document nearly a month later). On 9 November, Von Baden then passed on the chancellorship to Ebert. Describing the events in later years, Prince von Baden claimed that Ebert had personally hated the revolution ‘like sin’. Indeed, Ebert was able to successfully stem the tide of the revolution’s social dynamic, while also reducing the threat of a civil war and general strike. However, it was not as chancellor that he achieved this, but rather as president of the newly formed Council of People’s Deputies. Ebert declared ‘calm and order’ to be the very highest ‘revolutionary’ priority. Everywhere, there was considerable fear of a situation like in Russia. Looking back on events, the journalist Maximilian Harden would later sardonically quip that it had been a ‘very orderly, very calm, thoroughly decent revolution’. 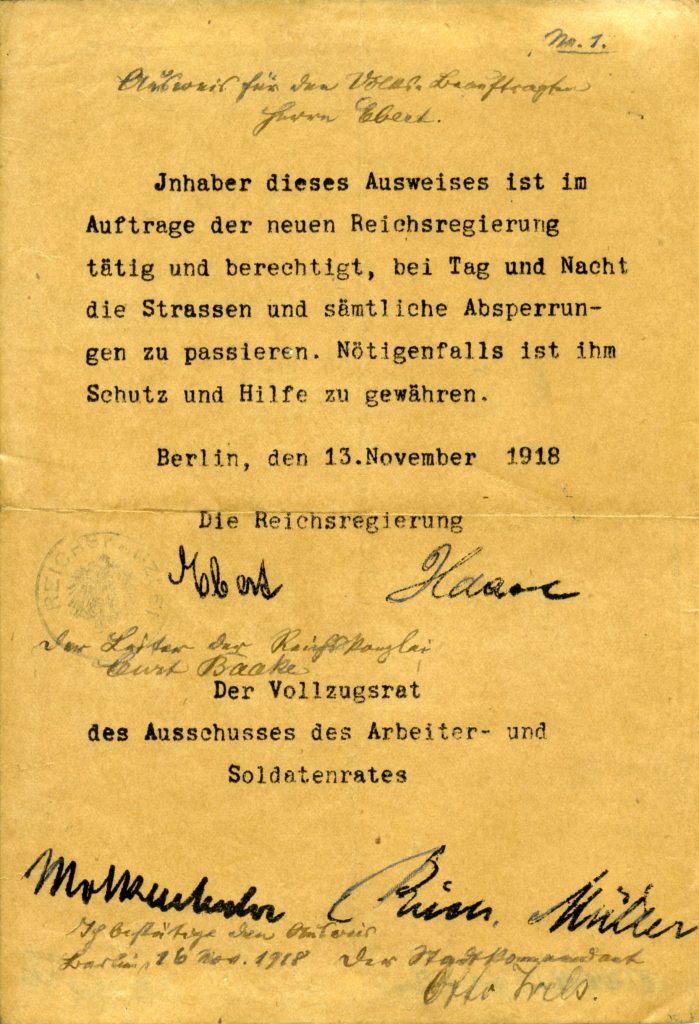 In early November, however, news spread across Germany via a flurry of special issue, morning, and evening newspapers. The reports mobilized people, who took to the streets. On 9 November, thousands gathered in front of the Reichstag building, where Friedrich Ebert and the new ‘finance minister’ Philipp Scheideman had just sat down to eat a bowl of soup. Mobbed by his supporters, Scheidemann – not Ebert – was persuaded to appear before the crowds. He gave an improvised speech – much to Ebert’s displeasure – in which he proclaimed:

‘The old and the rotten, the monarchy has collapsed! The new may live; long live the German republic!’

With these words, Scheidemann announced the beginning of a new era. Two days later, the German delegation signed the Armistice of Compiègne, thus ending the war. Within the next fourteen days, every dynasty ruling – at least in name – in the country had abdicated (after unification in 1871, the German Empire had comprised a collection of kingdoms, principalities, and duchies under the rule of the Kaiser). This historic event passed without violence – and, initially at least, almost entirely without opposition. On 12 November, the transitional government issued the ‘Appeal to the German People’, a kind of preliminary manifesto. The document was testament to just how revolutionary the new republic might have been: 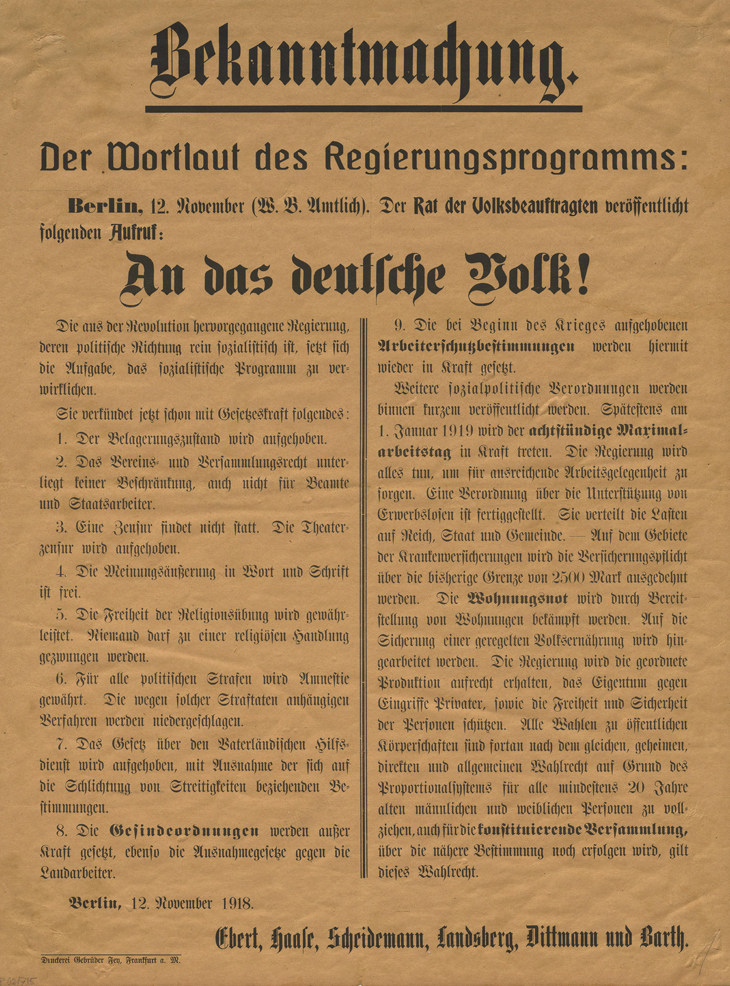 censorship was completely abolished; future elections were to be free, and conducted by secret ballot with equal suffrage for men and women; there were guarantees for both freedom of expression and freedom of the press; the Gesindeordnung (rules regulating the unequal master-servant relationship) was abolished; and the eight-hour workday introduced. While the ‘Appeal to the German People’ was an undeniably major advance, particularly from a social and constitutional perspective, further progress was slow to follow. Then came the violence. In December, the antidemocratic and counter-revolutionary armed forces returned to the fray. The deaths in front of the Maikäfer barracks (6 December) and the ‘Christmas Fighting’ around the Berlin Palace (24 and 25 December) were a bloody foretaste of the civil war-like situation into which Germany would descend between 1919 and 1924.