A Licence to Be (Different)

‘Friends and Helpers’ of Trans People in the Weimar Republic

Magnus Hirschfeld was the most famous scientist and activist involved in the Weimar Republic’s sexual reform movement. In addition to focusing on homosexuality and the campaign for its decriminalization, his work explored variations in gender identity, which he described as ‘intermediate sexual types’. Writing in the DHM blog, Thomas Jander (curator of the Documents Collection) takes a closer look at Hirschfeld’s work and explains what it has to do with documents known as ‘transvestite licences’.

1919 – Foundation of the Institute for Sexual Science

The summer of 1919 had profound significance for the future of Germany and Europe. On 28 June, representatives of nations still technically at war signed the Treaty of Versailles. A little over a month later, the National Assembly met in Weimar to enact a constitution that created the first ever German republic.

The summer of 1919 also saw the creation of another German institution that, while having considerably less global political significance than the Weimar Republic, is nonetheless much more than a mere historical footnote. On 6 July 1919, the doctor and sexual researcher Dr. Magnus Hirschfeld (1868–1935) opened the Institute for Sexual Science (IfS – Institut für Sexualwissenschaft) in Berlin-Tiergarten. It was the first institution of its kind anywhere in the world, and was for many years unique in its role in researching, advising, and treating people of all sexual orientations. First and foremost, however, homosexual and trans people came to Hirschfeld and his staff for advice and support. 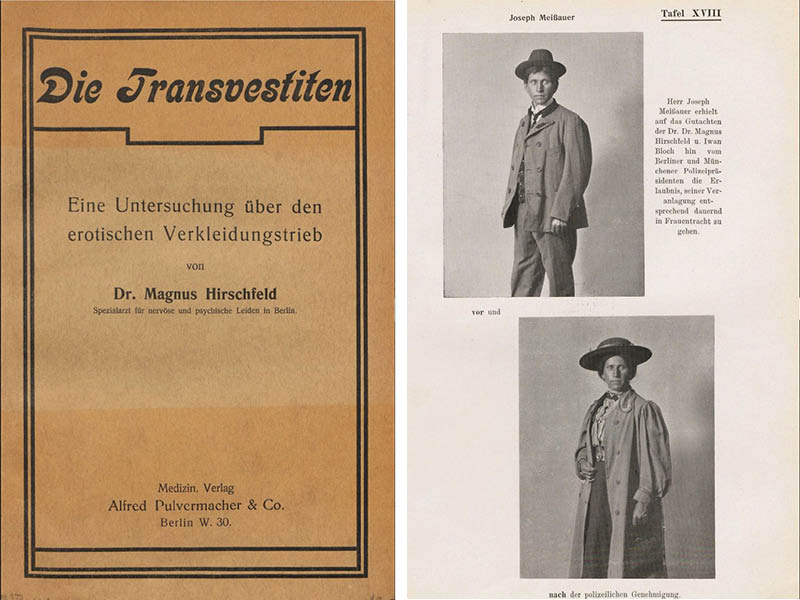 Hirschfeld was by then already a seasoned veteran in the campaign to decriminalize homosexuality. Sexual acts between men were illegal in Germany and prosecutable under Paragraph 175 of the Reich Penal Code (RStGB). Those convicted risked imprisonment and the loss of their civil rights. From a legal perspective, homosexuality was equivalent to prostitution and petty crime, and accordingly became the target of police surveillance and countermeasures.

Hirschfeld’s Relationship to the Berlin Police

Berlin was already a magnet for homosexuals at the turn of the 20th century, which is why a dedicated ‘anti-homosexual squad’ had operated as part of the city’s police force since 1885. Magnus Hirschfeld, a resident of the German capital since the early 1890s, fostered good personal relationships with members of the force, which allowed him to instil police officers with often remarkably progressive attitudes. He met with such figures as Leopold von Meerscheidt-Hüllessem (1849–1900), Hans von Tresckow (1863–1934) and Heinrich Kopp (1871–1941): senior police officers whose decision to adopt a soft-touch approach in pursuing ‘man-lovers and pederasts’, or even to campaign publicly for Paragraph 175’s abolition, was based on professional insight and personal conviction. Hirschfeld enjoyed a particularly good relationship to Tresckow and Kopp, who headed the squad respectively from 1900 to 1911, and 1911 to 1923. A long-standing member of the democratic-socialist SPD, Hirschfeld even made a personal intervention on Kopp’s behalf. In a letter from spring 1919 to Prussia’s then-Minister of the Interior, Paul Hirsch (1868–1940), Hirschfeld wrote:

Dear Minister and Comrade! In view of the pressing need to reform policing in line with socialist principles, I urge you to appoint Dr Heinrich Kopp, currently employed as a police inspector, to the ministry.

In essence, gay men (lesbian sex was not criminalized) still had to contend with police surveillance, although their daily lives – particularly in the early years of the Weimar Republic – began to be characterized by a significant degree of tolerance.

The situation was similar for trans people, then referred to as ‘transvestites’, who – in contrast to homosexuals – were (often) identifiable, since they publicly adopted the role of the ‘opposite’ sex. While this behaviour did not come under the purview of the legal code’s ‘homosexual paragraphs’, cross-dressing was listed under Paragraph 183 of the RStGB as a sexual offence, punishable with up to one year’s imprisonment. Since police officers from the anti-homosexual squad were also responsible for cases of this nature, they found it beneficial to liaise with researchers working in the sexual sciences.

While researching sexual variation – which he described in terms of ‘intermediary types’ – Magnus Hirschfeld had coined the term ‘transvestite’. He then published the world’s first academic study on the subject: Transvestites: The Erotic Drive to Cross-Dress (1910). In this work, Hirschfeld observed that there was no automatic relationship between homosexuality and transvestism, but instead argued that the urge to ‘cross-dress’ derived from a discrepancy between an individual’s mental and physical condition. Since a person’s clothing is of vital importance to both their physical and mental welfare, Hirschfeld felt that he was justified – indeed, obliged – as a doctor to provide proof of a patient’s need to ‘re-clothe’ themselves. Using this argument, Kopp and Hirschfeld were instrumental in the introduction of a new regulation: ‘cross-dressing’ men and women who had undergone a medical assessment were now entitled to a police-issued form of ID known as a ‘transvestite licence’ (Transvestitenschein).

Following an assessment by Hirschfeld, a Berliner by the name of Bertha Buttgereit (1891–1981) was granted this document in 1912, and in 1918 was even able to obtain a new passport. Adopting the new forename of Berthold, he was then able to live undisturbed as a man. That same year, Georg – later, Gerda – von Zobeltitz (1891–1963) was another early recipient of the licence. Prior to being assessed by Hirschfeld, Von Zobeltitz had had run-ins with the police and even appeared in women’s clothing before the army draft board in Potsdam. Although other, similar cases were reported by the Berlin press, they were not typical of the wider national context. As society in the Weimar Republic underwent tentative liberalization and opened up new spaces for discussing questions about sexual reform, life for trans people began to improve – albeit temporarily, and primarily in Berlin.

The licences themselves served to identify officially recognized ‘wearers of male / female clothing’, and gave protection to bearers who would otherwise have faced arrest and/or prosecution in spot checks, police raids, and court appearances.

In 1922, the Berlin police published a document that instructed officers not to arrest people simply for wearing gender non-conforming clothes:

‘The still commonly held view that people who dress up are clandestine criminals […] is outdated.’

The very fact that a police publication of this kind could be written, and its advice implemented in day-to-day policing, is primarily a testament to the training given to officers – specifically, by the IfS.  Consistent with scientific practice of the period, police attending the IfS were shown ‘real-life examples’. We know of two seminars where ‘gentlemen from the Senior Police Academy in Eiche’ were shown Eva Katter (1910–1995), whose ‘transvestite licence’ can currently be seen at the DHM’s exhibition, Weimar: On the Nature and Value of Democracy. The patient was used as an example of someone who had undergone sex reassignment surgery at the IfS. 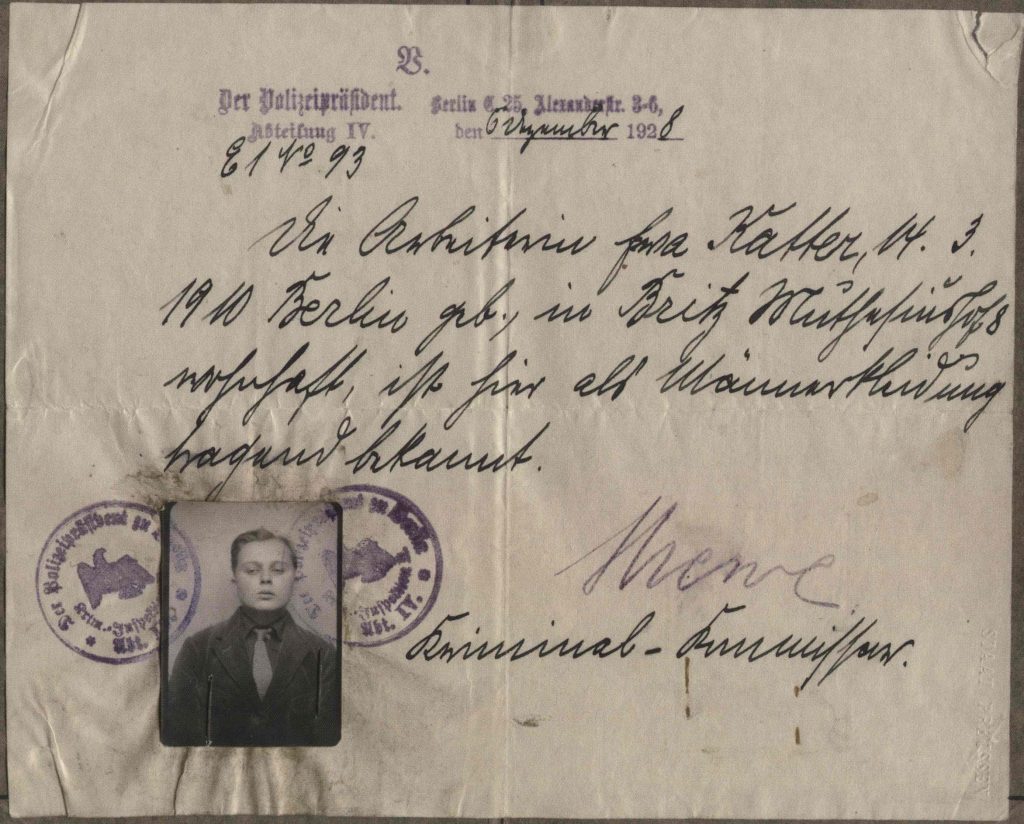 Aged 16, Katter had visited the IfS to see Dr Ludwig Levy-Lenz (1862–1966) and request breast-removal surgery. The request was denied due to Katter’s young age. Katter returned a few days later – this time, as a patient requiring urgent medical care, having attempted to remove his own breasts with a cutthroat razor. Both breasts had to be removed in an emergency operation, and Katter was given a medical certificate for a ‘transvestite licence’ and an official change of name. Now known as Gerd Katter, he completed a carpenter’s apprenticeship in Berlin and later lived in East Germany. 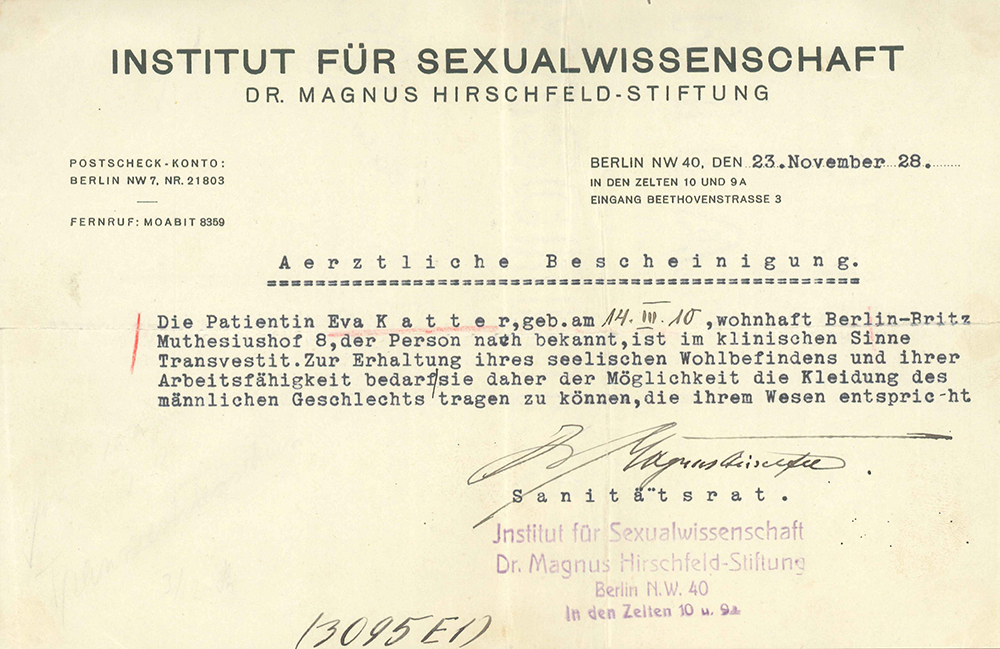 The IfS became an assessment centre for those seeking ‘transvestite licences’ and other ‘trans certifications’: following a decision by the Prussian Ministry of the Interior in 1921, it became possible for men and women who had undergone a medical assessment to take new gender-specific or gender-neutral names (such as Alex, Toni, or Gert). The downside of this measure was that such name changes were published in official gazettes, effectively outing the people concerned. When the IfS experienced financial difficulties caused by the hyperinflation of the early 1920s, medical certificates became a useful source of income: a written court assessment cost 150 Reichsmarks (price in 1924), while a ‘transvestite licence’ was priced at 50 Reichsmarks (1929).

There are no records – at least, no surviving records – of how many of these licences were issued. However, academic literature on this subject suggests that the practice was widespread, and that while it was not formalized on a national level, there is evidence that such identity documents were issued in other major cities such as Hamburg, Munich, Cologne, and Essen until the Nazi takeover in 1933.

The Rapid Demise of the Liberal Reform Movement

The police in the Weimar Republic were certainly no ‘friend’ or ‘helper’ to trans people. Nevertheless, the influence of external advisors, institutional acceptance of scientific insights, and liberalizing shifts in society more generally proved transformational in police work, which contributed to the creation of public spaces where people had the freedom just to ‘be’ (different). However, these spaces were already beginning to disappear by the second half of the 1920s. At the very latest, the destruction of the IfS by the Nazi regime in May 1933 marked the end of the first tentative steps towards tolerance for homosexual and trans people in Germany.