Sketch of a Physical Description of the Universe

Alexander von Humboldt had a compelling desire to experience the world. During his expeditions he tried to get as close to the material world as he could, and his Cosmos bears the subtitle ‘Sketch of a Physical Description of the Universe’. Such a physiography is based on the physical experiences of the scholar who studies and describes the natural environment. It is precisely in this desire for experience that Humboldt and cinema meet. Stephan Ahrens, curator of the selection of films on Alexander von Humboldt currently shown at the Zeughauskino, introduces two of them.

To find traces of Humboldt in the history of film I have looked beyond the historical figure.[1] In what follows I want to explore where cinema and Humboldt’s work meet in a material aesthetics. Humboldt’s expedition to the South American continent was not just a scientific event but also a literary one. The detailed descriptions of his travels offered readers first-hand accounts of the natural world of a continent that would have been largely unknown to most of them. This established the legend of Humboldt as the ‘second discoverer’ of the Americas, someone who unlike, for example, the Spanish conquistadors, did not come as a conqueror.

In his film Orinoko, Nuevo Mundo (Orinoco, New World, 1984), the Venezuelan director Diego Rísquez presents Alexander von Humboldt and the botanist Aimé Bonpland as successors of Christopher Columbus, Antonio de Berrio, the Catholic Mission, and Walter Raleigh. Is he a ‘second discoverer’ here, one who is different from his predecessors? Humboldt does follow in the footsteps of adventurers, conquerors, and missionaries, yet Rísquez sets him apart from them. This difference is indicated by a change in the cinematic score: with Humboldt’s arrival, spherical electronics give way to piano music. His relationship to the country seems to be a more intimate one than that of his predecessors. Just as Humboldt and Bonpland focus their magnifying glasses on leaves and river animals on the bank of the Orinoco, Rísquez’s camera carefully and slowly circles the Europeans to observe their gestures in detail.

Rísquez’s Humboldt does not just measure the ‘new world’, he also tries to put it into a (visual) frame and a frame of reference. The director sets up a frame within a frame by adding a Baroque gilded picture frame through which Humboldt captures just one detail at a time. Yet nature shatters this frame – just as it extends beyond the reach of the camera’s lens. A ‘physical description of the universe’ always has to take account of the potential infinity of the flows of nature. 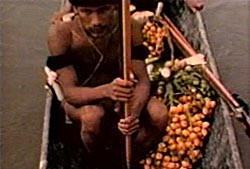 If we look at the world through Humboldt’s eyes we share his fascination with nature. A similar relationship between the person conveying an experience and the one vicariously receiving it was posited by the film theorist Siegfried Kracauer, who wrote that ‘cinematic’ films – films that are conscious of their photographic origins – ‘incorporate aspects of a physical reality with a view to making us experience them.’[2] For this reason, film has ‘an affinity, evidently denied to photography, for the continuum of life or the “flow of life”’.[3] Kracauer defines a material cinematic aesthetics, in which the viewer sees unmanipulated reality through the gaze of the camera. ‘Cinematic’ Humboldt films thus bring together two different subject positions of experiencing nature. Just as Humboldt filled his readers with enthusiasm for the natural world of the Americas, the camera becomes the window through which viewers experience the world.

The ascent of Chimborazo

We had to hold on with our feet and hands. We were all injured and bleeding … Breathing was extraordinarily difficult, and, to make the situation still more unpleasant, every one of us felt nauseous and had an urge to vomit … Our gums and lips were also bleeding. Our eyes were bloodshot.[4]
–Alexander von Humboldt

We slowly set off. After just the first few metres I noticed how my heart was pounding, and that no matter how fast Baltazar was walking I had to find my own pace, slowly step by step, and although it became more and more exhausting, and I had to support myself ever more frequently on my ski sticks and take a rest, I got used to the challenge, and with every metre won it got better. It was as if I demolished barriers within myself.[5]
– Rainer Simon on the preparations for shooting Die Besteigung des Chimborazo

Rainer Simon’s film Die Besteigung des Chimborazo (The Ascent of Chimborazo) is not only a film about Humboldt (played by Jan Josef Liefers), but it also shares Humboldt’s material aesthetics in its exploration of the landscape and the unbridled forces of nature. 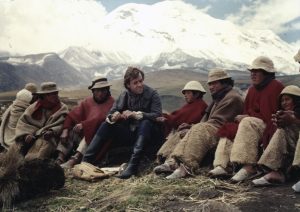 This is exemplified by the images of an erupting volcano, which appear at regular intervals. Following the trek of Humboldt’s research party scrambling up the Andes, we also see nature in a state that is conveyed only by the eye of the camera. Simon shows a young Humboldt battling against the constraints imposed on him by the demands of his family, the Prussian bureaucracy, and the Spanish colonial system. For Simon, Humboldt is not just a researcher of the physical world but a seeker of meaning:

To make a film about Alexander von Humboldt means to think about a human being who tried his utmost to give meaning to his life.[6]

In Simon’s film, the young Humboldt finds himself at a crossroads: He has to decide between his desire to travel and his love for Reinhard von Haeften (Sven Martinek). In order to stay with Haeften he would have to find a way to fit into Prussian society – but Humboldt is somebody who rebels against the status quo. When Humboldt suggests to Haeften that they could live together like a family, ‘in tranquillity’, and promises that ‘we will make the world inside us’, Haeften exposes this as self-deceit. It is a moving scene, which emphasizes Humboldt’s ceaseless quest for meaning.

Simon counters the external realities of an ossified society with dreams and possibilities which might be seized in a moment of improvisation. Werner Herzog’s film Aguirre, der Zorn Gottes (Aguirre, Wrath of God), shot in 1971/72 in Peru, portrays a very different discoverer. The Aguirre of the title is one of the Spanish conquistadors of the 16th century, who were sent to the ‘new world’ to expand and secure the possessions of the Spanish crown. When Herzog’s Aguirre meets a Yagua Indian, he does not even try to understand what he is saying, but just stares at the gold the man wears around his neck. 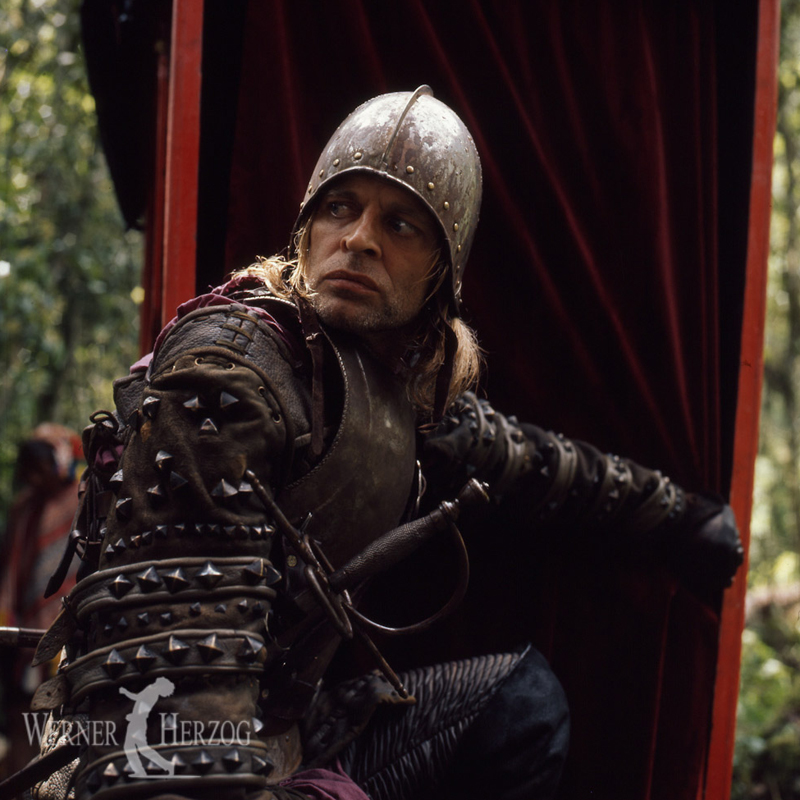 The Humboldt in Simon’s film, in contrast, sits down with Quechua Indians and tries to learn some words of their language. He slowly tries to get to know them and their language, asks them for the words for ‘mouth’, ‘hand’, ‘woman’, and in return tells them the German words. An uncontrived scene shot in a single take, in which Simon, Jan Josef Liefers as Humboldt, and the cameraman Roland Dressel seem undeterred by the unpredictability of the situation.

Capturing the material world through a pure gaze – a romantic fantasy?

The idea that to capture the material world a film could rely on improvisation, an unspoilt experience, and a ‘pure’ gaze is also a phantasm, a romantic fantasy. And this is where cinema, with its technical means, and Humboldt’s ‘physical description of the universe’ differ. In Orinoko – Nuevo mundo, Humboldt’s physical encounter with the world is a preconceived one. By measuring the world, the naturalist tries to shape it and frame it, but by doing so always leaves something out. Humboldt’s rebellion against Prussian society remains trapped in this framing function. Yet there are also ecstatic, even ironic moments that break free – from parrots defiantly perching on the measuring instruments to the orgasm on a tree root. But in the end Humboldt’s measuring tool and the gilded picture frame float away down the Orinoco just as the Bible and the cross of the missionary before them.

In Rísquez’s film, Humboldt and Bonpland are the last Europeans to arrive on the banks of the Orinoco. We could add that they are followed by filmmakers looking for a physical experience, equipped with all the technical means at their disposal. Humboldt was fascinated by the possibilities of early photography but the discovery of this new medium came too late for him to use it during his expeditions. Both cinema, which owes its supposed directness to its technical resources, and Humboldt’s work convey experiences (of nature) whose value we must continuously reassess, between a quest for meaning and a description of the physical world.

[1] See the interpretations of Humboldt by the actors Albrecht Schuch in Detlev Buck’s Vermessung der Welt (Measuring the World, 2012), based on Daniel Kehlmann’s novel of the same name, or Werner Herzog in Edgar Reitz’s Die andere Heimat – Chronik einer Sehnsucht (Home from Home, 2013).