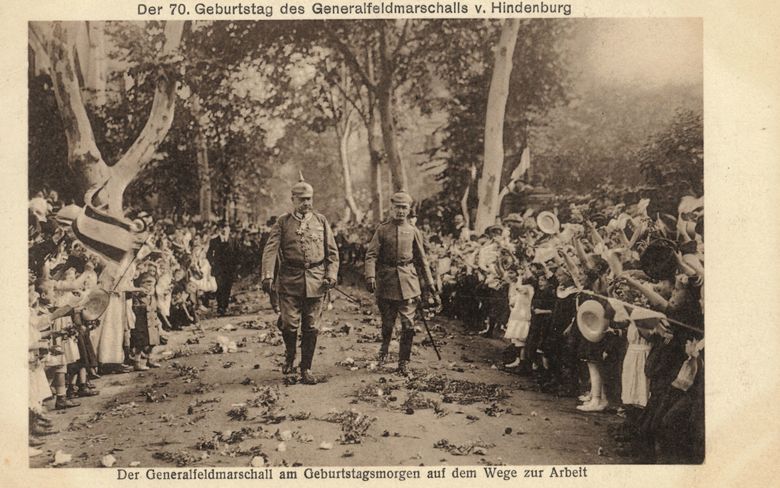 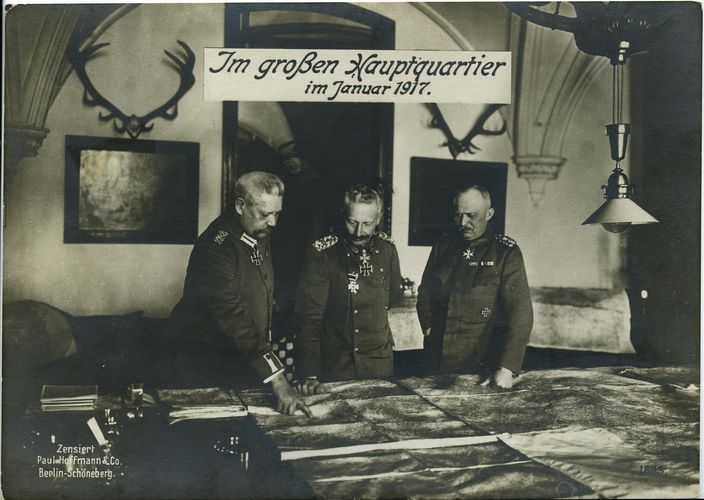 The Hindenburg myth in Kreuznach

The large headquarters was the mobile strategic command centre in the First World War. It changed location many times during the war, but was in Kreuznach from January 1917 to March 1918. In 1924, Kreuznach was given the title “Bad”.

The Hindenburgblick is an observation point near Odernheim in the vicinity of Kreuznach. Even today it commemorates Paul von Hindenburg, Supreme Commander of the German Armed Forces.

After victory against Russian troops in the 1914 Battle of Tannenberg, Hindenburg became a symbolic figure of the victorious hero. He was even able to retain this status  after Germany’s defeat in the First World War. Hindenburg did not take part in the armistice negotiations, having handed this responsibility to State Secretary Matthias Erzberger.

In 1925, Hindenburg was elected Reich President of the Weimar Republic.

Field Marshal Hindenburg and General Erich Ludendorff surround emperor Wilhelm II in the army headquarters in 1917. Both took over supreme command of the army in 1916, and quickly made significant gains in political influence.

The first conference on military objectives took place in Kreuznach on 23rd April 1917. Both military men pressured the emperor to prompt Reich Chancellor Bethmann-Hollweg to determine the significant annexations in Russia, Belgium and France as being war objectives. The Reich Chancellor refused. Ludendorff and Hindenburg then pushed for his resignation, with success.

On 2nd October 1917, a few months after the chancellorship crisis, Hindenburg celebrated his 70th birthday in Kreuznach. People throughout the German Empire took part in this event, knowing full well the influence Hindenburg had in the empire at that point.