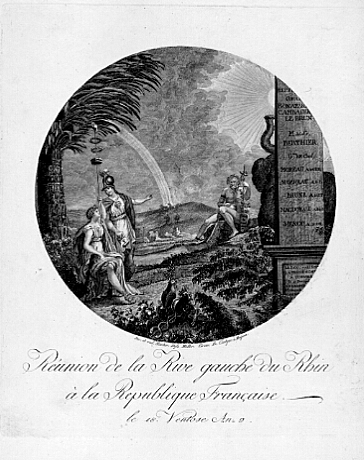 In 1795, France and Prussia signed a peace treaty in Basel. This marked a turning point in the balance of European power.

The Rheinkarte (Map of the Rhine) documents various conflicts: from 1792, Prussia fought alongside Austria against France; in the same year, the victorious French Revolutionary Army occupied German territories on the Rhine.

In the Peace of Basel, Prussia ceded territories west of the Lower Rhine. Through this independent act, the great power status of revolutionary France was recognised. Austria continued to fight, but had to relinquish territories west of the Upper Rhine in 1797. For the first time ever, cities such as Cologne, Speyer and Worms were French. The Rhine became France’s eastern border.