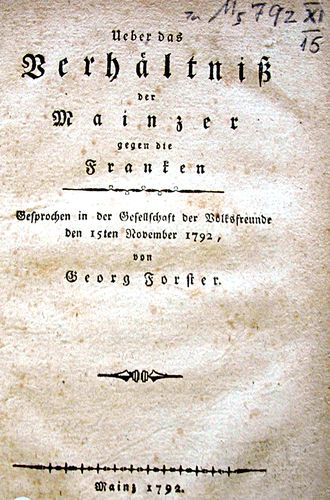 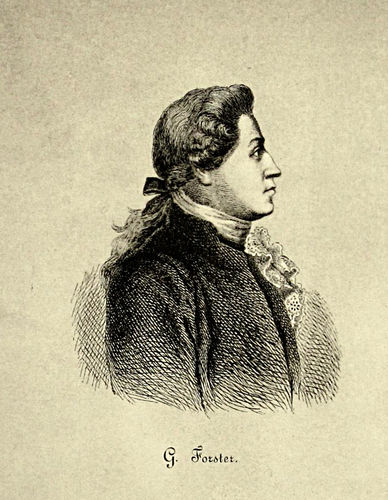 “On the Relationship of the People of Mainz to the Franks”

Georg Forster was one of the most prominent members in the Jacobin Club of Mainz. As a seventeen-year-old, he took part in James Cook’s voyage around the world. The explorer and writer of travellogues had been Mainz University’s chief librarian since 1788, and was also a representative of the National Assembly, and travelled to Paris carrying the unification request.

However, he could not return to Mainz because of an imperial ban (Reichsacht) being placed on him. In France, he became caught up in Robespierre’s reign of terror. Nevertheless, he continued to defend the ideals of the revolution until his death from pneumonia at 39 years-of- age in Paris.

On 15th November 1792, he delivered a speech in the Jacobin Club of Mainz entitled “On the Relationship of the People of Mainz to the Franks” (excerpt):

It is true, from an early age, the Germans have been instilled with an animosity towards their French neighbours; it is true, their traditions, their languages, their temperaments are different; it is true, when the cruellest monstrosity still reigned in France, our Germany burned at her behest. A certain Marquis de Louvois, to whom history will not be kind, burned the Palatinate, so that the people fled from him, and Louis XIV, a miserable despot, put his name to this despised order. –

Do not let antiquity’s events fool you, fellow citizens; the freedom of the Franks is but four years old; and see, already they are a new, recreated people; they, the conquerors of our tyrannisers, they protect us, they give us the most moving evidence of their faithfulness, through their willing to share with us a so dearly purchased freedom – and that is merely the first year of the republic! If freedom in the hearts of man can have this effect, then man himself can also sanctify the temple in which he lives!