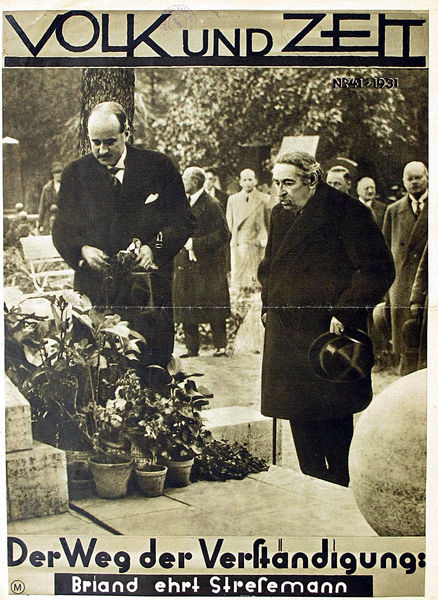 On the 3rd October 1929, Stresemann died. The German writer Harry Graf Kessler described in his diary how news of the German statesman’s  death was received in Paris:

… at Reith’s place in the afternoon. He said the impression that Stresemann’s death made in Paris was monstrous; the people are alltogether taken aback. Briand was already with him at 10am, and expressed himself in an extremely warm, empathetic manner. The general feeling is not merely consternation, but also unease as to what will come next.

I fear Stresemann’s death will first and foremost have very serious consequenses for domestic politics – a shift of populist parties to the right, a break in the coalition, an easier passage for those striving for a dictatorship.

All of the Paris morning newspapers are carrying the news of Stresemann’s death in large print. It is almost as if the greatest French statesman had died. The mourning is widespread and genuine. One feels that there is such a thing as a European fatherland. The French perceive Stresemann as a kind of European Bismarck.

The legend begins; Stresemann is almost a mythical figure because of his sudden death. He is the first to arrive in Walhalla as a genuinely European statesman.