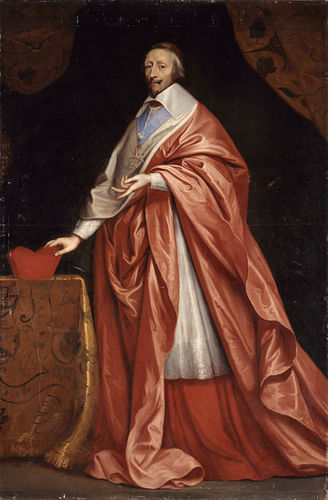 Cardinal Richelieu was the First Minister (Principal Ministre) of the French King Louis XIII (1601-1643) from 1624. In the Thirty Year’s War, he committed to an alliance against the Habsburgs with Sweden, the Netherlands and England.

In the year leading up to war, Richelieu secured one million livre for protestant Sweden. Using these funds, they were able to advance as far as south Germany. His position as catholic bishop did not hinder him from leading a war against the catholic emperor and the pope of the Holy Roman Empire after 1634. Even after Richelieu’s death in 1642, his policies, through his successor Cardinal Mazarin, influenced negotiations during the Peace of Westphalia. In these talks, France were able to push through various conditions that became important in establishing their  future European supremacy. Their claims on Alsace and to the Upper Rhine were upheld, as were their claims to the Bishoprics of Metz, Toul and Verdun.