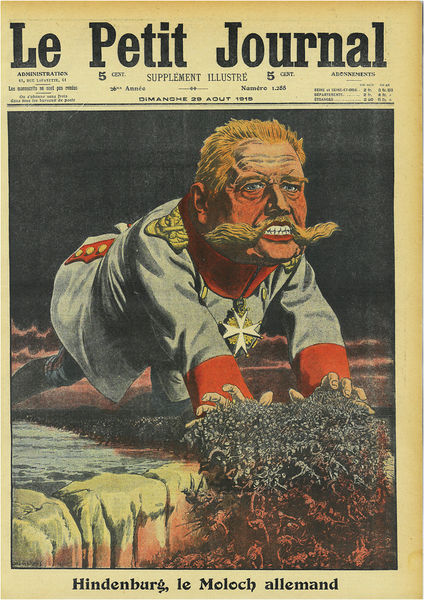 In the bible, ‘moloch’ describes sacrifical rituals that stipulated the burning of children. Figuratively, it is a terrible power that continually demands more victims, and threatens to devour everything.

In this French caricature from August 1915, an enormous, snarling Hindenburg is shoveling troops into a chasm with both hands.

During the Battle of Tannenberg in August 1914, over 30,000 soldiers died under his command – German, but above all Russian. In this depiction, the men sacrificed are not differentiated. Hindenburg is presented as a moloch who is sacrificing the German Empire’s children.

Shaped by the conflict surrounding Alsace and Lorraine, fears in France grew: the Western Front had been frozen since the autumn of 1914, with the majority of the front running through French territory.

In the 1916 Battle of the Somme, over one million soldiers were killed or wounded. After this, the German supreme army command planned for a shortening of the front in order to save human life and materials. The German defensive line, captured as of March 1917, was named the ‘Hindenburg Line’ by the Allies. The Allied breakthrough on 27th September 1918 followed the initiation of armistice negotiations.