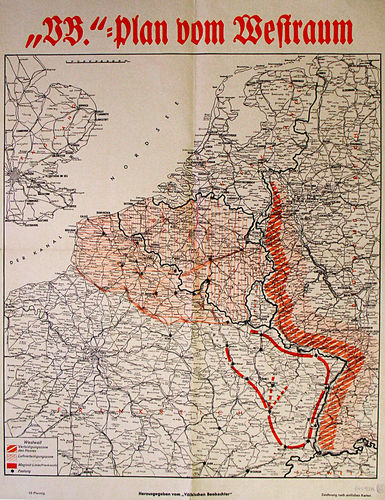 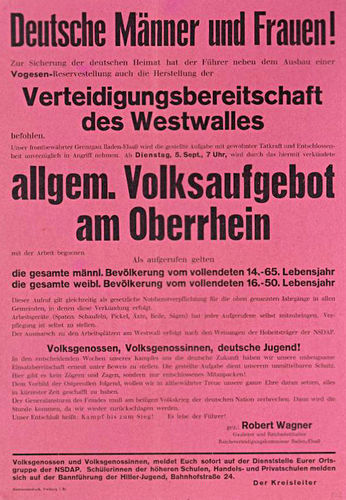 In 1936, Adolf Hitler gave planning orders to build the Siegfried Line. It was constructed between 1938 and 1940, and spanned 630 kilometers from Kleve in the Lower Rhine to Basel. Up to 1940, 14,000 bunkers were constructed, complemented by 167 kilometers of anti-tank defences. The Siegfried Line fulfilled its protective function both during the invasion of Poland and at the beginning of the Battle of France. Most of the Siegfried Line bunkers were small constructions, not comparable to the bunkers of the Maginot Line. However, both defensive structures were surrounded by a myth of invincibility spread by the propaganda of the respective countries.

Defence of the Siegfried Line

In August and September 1944, Allied troops pushed the German Wehrmacht out of France. On 24th September 1944, Hitler enacted a Führer Decree ordering the renewed construction of the Siegfried Line.

Rundstedt, Supreme Commander of the West, ordered the local population of the Upper Rhine to reactivate the defensive readiness of the Siegfried Line through improvised means.

The military leadership was clear that the Line could merely delay an attack. In 1944, it only took Allied troops a matter of days to break through the Siegfried Line.