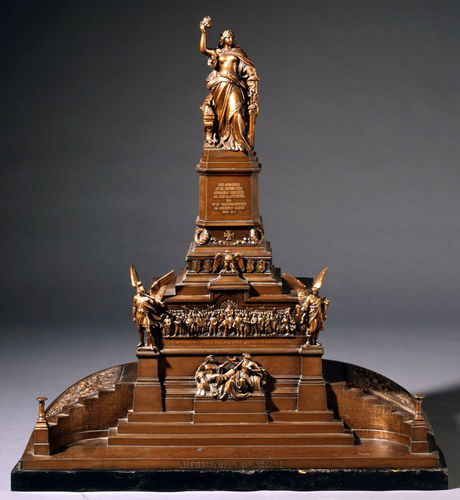 A memorial to the German unification of 1871

Since 1883, the Niederwald memorial overlooking the city of Rüdesheim has marked German victory against the French in the Franco-German war of 1870-71. On 19th July 1870, the French emperor Napoleon III, nephew of Napoleon I, declared war on Prussia. This war strengthened the German national movement, as the southern German states allied with Prussia and the North German Confederation.

On 18th January 1871 in the Versailles Hall of Mirrors, Chancellor Otto von Bismarck achieved his aim: the unification of German states under Prussian leadership, and the proclamation of the Prussian King Wilhelm I as German emperor.

The Peace of Frankfurt forced France to cede Alsace and part of Lorraine to the German Empire. It also stipulated that a high amount of reparations were to be paid to Germany.

The planning and construction of the Niederwald monument lasted 12 years. The figure of Germania, measuring 12 meters, holds the imperial crown with laurel wreath in her right hand, and in her left a lowered sword. She is not looking towards France, but is turned gently eastwards, towards the new German empire. On the largest bronze relief of the 19th century, 133 life-size figures are to be found. Five of the six verses from Max Schneckenburger’s poem “The Watch on the Rhine” from 1840 are engraved in the pedestal, while the verse pertaining to France has been left out:

Should my heart not survive this stand
You'll never fall in foreign hand,
Much, as your waters with no end,
Have we our heroes' blood to spend.

Dear fatherland, no fear be thine,

Firm stands the Watch along, along the Rhine!

To the complete version of "The Watch on the Rhine"