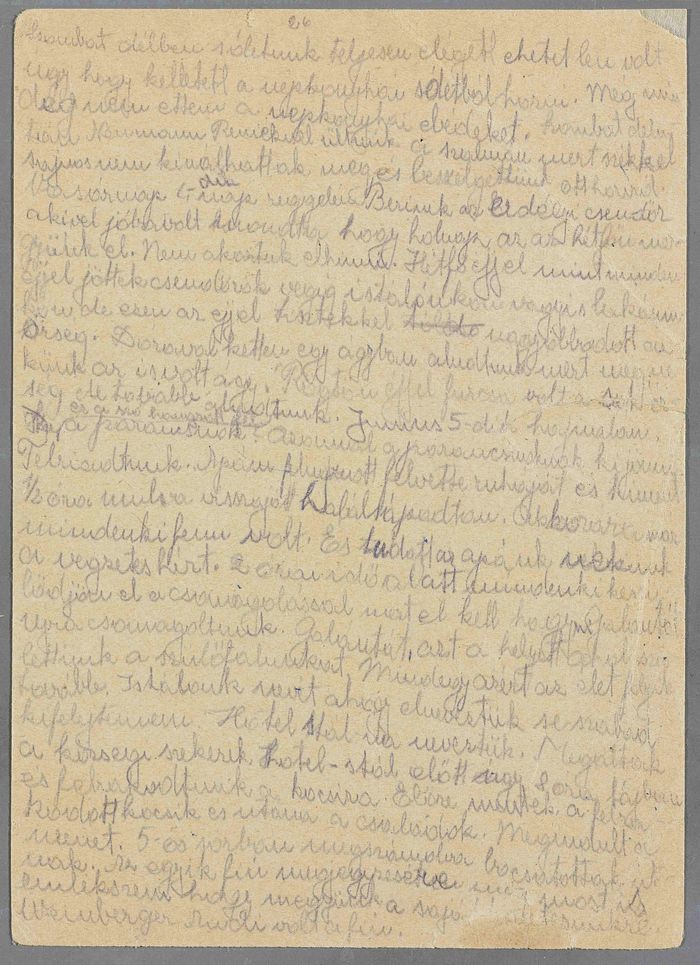 At noon on Saturday, our cholent was completely burnt and inedible, so we had to get some of the soup kitchen’s cholent. I still didn’t want to eat the lunch from the soup kitchen. In the afternoon on Saturday, we sat with Reni Neumann on the straw, since she couldn’t offer us a chair, and talked about our home. Early on Sunday, Beri heard from the Transylvanian police offer with whom he had a good relationship that we would depart the next day, that is, Monday. We didn’t want to believe it. Monday night, like every night, the police officers went through the stables, that is, through our apartments, but that night, the guard troop was enlarged with officers. I slept with Dóra in one bed, because we even had that, a bed. The many guards seemed strange to us at night, but we continued to sleep. On June 5th, early in the morning, we heard this question: Who is the principal? He is supposed to come out immediately, they said. We startled. My father jumped up, got dressed, and went outside. Half an hour later, he came back and was white as chalk. By that time, everybody had woken up. Our father told us the fatal news: Within two hours, we had to pack everything and be ready, we would leave Galánta. Once again, we had to pack. We left Galánta, the place where we had been born, our home village. Never mind, life goes on anyway. I shouldn’t forget to mention what we called the istálló, our shelter. We called it Hotel Stal. The community’s horse carriages stopped in front of Hotel Stal at about 8 o’clock, and we put everything onto the carriage. The loaded carriages went ahead, and the families followed them. The march began. We were sent off in rows of five.