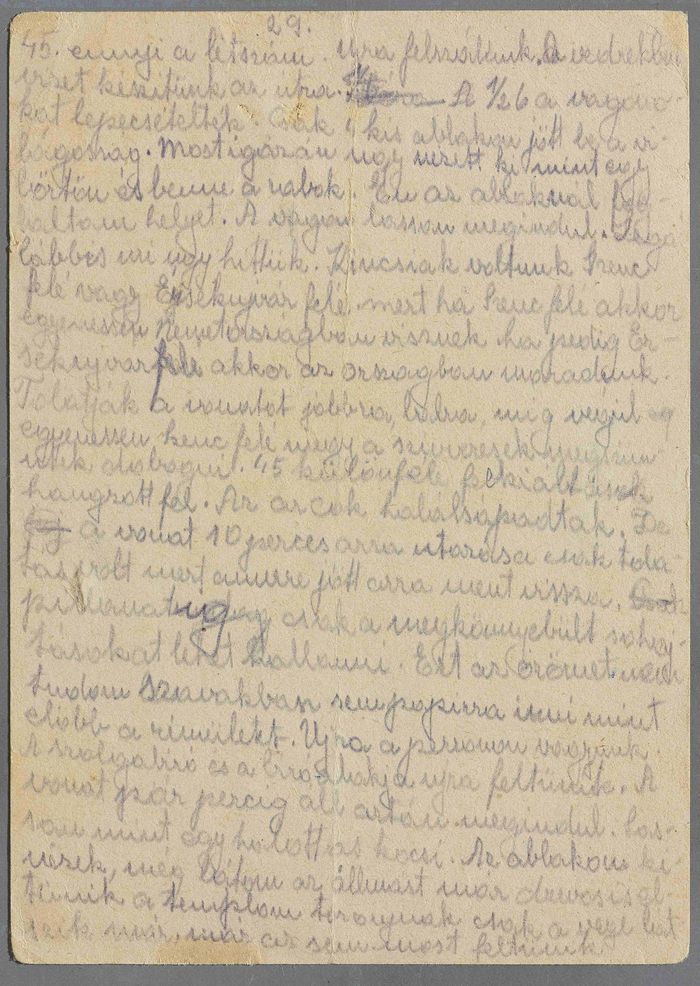 45. That is our number. We get in again. We prepare water in the bucket for the journey. Quarter past five the wagons were closed. Light only comes in through four small windows. Inside, it already looks like a prison with inmates. I sit down at the window. The train slowly starts rolling, at least we think so. We are curious whether the train will go in the direction of Szenc or Érsekújvár. If it’ll go for Szenc, they’ll bring us straight to Germany, and if it’ll go for Érsekújvár, we’ll remain in the country. The train is pushed left and right, and finally it’s going in the direction of Szenc, after all. The faces are pale. A ten-minute journey, but the train was only shunted, because it went back in the same direction. We hear people breathe in relief. Like the fear, I also cannot describe the joy. The figures of the chief judge and the judge appear again. The train halts for a few more minutes, then it slowly starts rolling again. Slow as a hearse. I look out of the window, I can just about see the train station and the dzevos is already disappearing, one can only see the tops of the church spires, and then they are also gone. Now the Jewish cemetery appears, where Joszika, one of my brothers, rests. I look there, I can still see it. Just fields, fields, and we leave Galánta. I lean against the window and cry. I try to control myself and keep the tears back, and I look at the fields, where I often went past when I visited my grandmother in Sellye. But I did that in a passenger train, and being free, and I knew that my grandmother would soon take me in her arms. But now I don’t know what awaits me. We leave Tósnyárasd behind us, and the houses of Sellye appear. A big jolt, and the train stops. A sign says Vágsellye. I look outside and see a wagon similar to ours, and the people equally look outside, through the grates of the small windows, like I do. Who are you? Where are you from?, we hear from over there and the answer comes through the windows. From the Galánta area. And you? From the Vágsellye area. Where is the Present family?, I ask. Who’s asking? Their grandchild. Dóra, is that you? It’s Lea. Your grandmother is in the back. Lea is the friend of our Dóra. Questions and answers fly from one wagon to the next.